I’ve been there. You have two days to hit all four parks, and you want to ride everything. You know it’s possible, but you also know you’ll have to resign yourself to popcorn and Mickey bars for 48 hours.

Not true, my friends! It is possible to snag some good, healthy(ish) theme park food on-the-go!

Here are some of my favorite spots to grab some delicious, FAST food that will keep you going strong throughout your park touring. And the best news is — most of this stuff is easy to eat while you’re walking, so you don’t even have to jockey for a table! Just order, pay, and head to the next ride — eat on the way!

Pork Egg Rolls in Disney’s Animal Kingdom:
Yum! One of my favorite suggestions! Over in Anadapur Village in the park’s Asia section, you’ll find a great little counter-service restaurant right between Yak and Yeti Restaurant and Kali River Rapids.

Anadapur Local Cafe serves a rockin’ pork egg roll that’s out of this world. Best part? It’s finger food, so you can grab and go!

Gourmet Sandwiches, Muffins, Fruit, and Trail Mix in Disney’s Hollywood Studios:
There’s a plethora of grab-and-go deliciousness in the studios, and you won’t have to sit down once!

Head over to Starring Rolls Cafe for a sandwich (including a great veggie option!) or a pastry, and if you get hungry again, hit Anaheim Produce on Sunset Boulevard for trail mix or apple slices with caramel dipping sauce. I promise you won’t hit a mid-day slump with these choices!

Bratwurst and Dessert in Epcot:
There’s really no excuse whatsoever for eating poorly in Epcot; it’s bursting with delicious and easy options for substantial grab-and-go food! I like to swing by Sommerfest in Epcot’s Germany pavilion for a Brat, then stop by Tangierine Cafe in Morocco for some delectable baklava.

Now, if baklava isn’t your thing, keep walking a few paces and grab a crepe in France! All are easy-to-eat options that won’t weigh you down on your touring adventure.

Chicken and Wild Rice Soup or Hot Dogs at the Magic Kingdom:
Shocked that you could find such a wholesome option in a theme park? Don’t be!

Disney’s been working hard to make delicious, healthy options easier for you, so take advantage! At the Magic Kingdom’s Sleepy Hollow in Liberty Square, you can get a nice-sized portion of Chicken and Wild Rice Soup — and the soup container is pretty portable, so it will be easy to eat while you’re waiting in line for the Haunted Mansion!

Of course, if soup isn’t enough to quell your hunger, head over to Casey’s Corner before the parade and get yourself a hot dog (hey, you’ve been healthy all day!).

One of my favorite traditions (with touring plan synergy!) is to get a hot dog and dine while saving my parade viewing spot on the curb. It’s a great opportunity to do a little people-watching and rest my feet while I’m still (technically) being productive!

What are your suggestions?
I’m looking forward to your favorite tips and tricks for eating on-the-go while you’re touring the parks in Disney World! Do us all a favor and share your ideas in the comments below — you never know when you can help a fellow Disney fan by giving a quick tip!

AJ writes The Disney Food Blog and guest authors at the Touring Plans blog about food in the Disney theme parks and resorts. 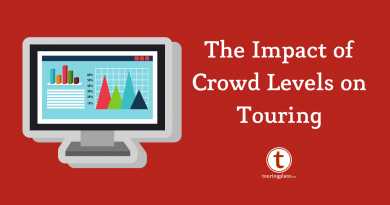 The Impact of Crowd Levels on Touring