With crowds thinning out from Summer peaks and Food & Wine Festival just around the corner, I headed to Epcot last Friday to take a look around. My morning started with a fuel-up at Kouzzina at Disney’s Boardwalk Resort. It’s generally easy to do a walk-in there, and breakfast never disappoints. I chose the Country French Toast with fig and apple compote and, like I told the Twitterverse that morning, it was so good it made me want to hug people. You can find my review here.

I made the short walk from Kouzzina around the Boardwalk to Epcot’s International Gateway. The turnstiles are currently being replaced with RFID gateways, so bag check has been taken down to one two-sided table. The Gateway is rarely very busy, so it’s not a major inconvenience. World Showcase doesn’t open until 11 a.m. so I headed to Future World. September weather here in Florida is still pretty steamy, but the sky usually manages to be a fantastic shade of blue, making for some pretty great pictures. Crowds were fairly light as I traveled through, with Spaceship Earth posting a five-minute wait and Epcot Character Spot a seven-minute line to the characters. If you’re looking for a great character photo-op with Mickey, Minnie, and Pluto, Character Spot can’t be beat. It’s rarely a long wait and has been recently renovated. You’ll find its entrance in the breezeway just across from Innoventions West.

The Land pavilion was bustling as usual and Soarin’ posted a reasonable 45-minute wait time while Living with the Land was a walk-on attraction. I skipped Soarin’ for the day, interested to see how the Fountain View renovation had gone. For those who haven’t heard, Fountain View Ice Cream has been converted to a Starbucks location. The new decor is in keeping with the forward-looking vantage point of Future World without being kitschy and the food and beverage offerings are classic Starbucks with Disney-added baked goods and snacks. I tried the Pumpkin scone and was happy with the texture – not too dry – as well as the taste – not too sweet. I think guests will be pleased to find that most food and beverage offerings in the cafe are included on the Disney Dining Plan and require one snack credit each. World Showcase was beginning to fill in when I started the circle around 11:30 a.m. Most noticeable this week were the Food & Wine kiosks set up and awaiting the Festival. I like that each of the booths is themed in keeping with the international stories in Epcot. World Showcase was completely uncrowded as I made my way around, with walk-up lunch availability for even the most popular spots like Via Napoli. Character lines for Mulan, Belle, and Donald Duck were short, with between 15 and 20 guests in each. While crowds are generally down this time of year anyway, it was also melt-your-face-off hot, which never goes well in the mostly-sunny walkways of the showcase. I did notice that the construction at the Moroccan pavilion’s new waterside restaurant venue has risen to second-story level above the construction walls, giving us a little hint of what’s to come.

I rounded out my trip with a performance by the American Pavilion’s Fife & Drum Corps who play at several times throughout the day. Check your times guide for more information. Even on a hot afternoon, there’s something to be said for watching a colonial-era band pay tribute to the Star Spangled Banner.

Epcot AtMousePhere: The Music of Innoventions 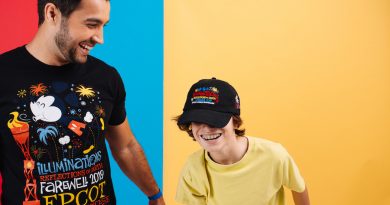 21 thoughts on “Observations at Epcot: September 6”