The Saturday Six is a weekly look at the most interesting, most fun, and sometimes even the most jaw dropping things within the theme park world that we all love so much. Whether it’s the top six “secrets” of the Marvel Superhero Island, the top six food options at Fast Food Blvd, or even the top six signature drinks inside the Universal parks, the Saturday Six will be your personal guide to experiencing the very best Orlando has to offer.

This week’s Saturday Six looks at six MORE Extreme Eats found at the Universal Orlando Resort. Faithful readers the blog may remember our original look at six Extreme Eats on property and now we’re back with six more! While other theme park companies may be trying to convince guests of the magic of healthy living, Universal is giving guests what they want: incredible food items that may at times be decadent… may occasionally be over the top… and sometimes should probably be sold with a defibrillator or insulin syringe, but they always taste great. You’re on vacation; there will be plenty of time to eat grapes back at home.

I was very excited to finally try these extreme nachos on my recent trip up to Universal (click here to read my observations of the time spent on property) and they did not disappoint. We took a quick walk over to the Royal Pacific during the middle of the day to get away from the heat and sat down poolside at the Bula Bar & Grille.

A regular order of the Shipwrecked Loaded Nachos contains a gigantic plate of nachos with black beans, cheddar cheese sauce, sour cream, pico de gallo, guacamole, jalapeno, and scallions. Considering its size, this is almost a steal at $10. You can also add grilled chicken ($14) or grilled beef ($15) to the toppings. Definitely the best plate of nachos I have ever had, what really takes this experience over the top is half way through eating them, when all the toppings have started to become absorbed into the chips themselves. So good.

One of the oddest things I find about the Universal parks is the almost unlimited availability of being able to purchase candy that has real bugs and insects inside! I mean, that’s weird, right?

You may have a hard time tracking down a Kit Kat or Snickers bar inside Islands of Adventure or Universal Studios Florida, but if you want a strawberry flavored lollipop that has a scorpion inside of it? Head to Jurassic Park. Need a piece of orange flavored candy with ants in it? Walk on over to Revenge of the Mummy‘s gift shop. Got a taste for crickets? Well not only does the MEN IN BLACK Alien Attack store sell toy “cricket” guns themed to the movie, but they also sell candy with actual crickets inside them.

For research purposes, we bought a banana flavored lollipop that has a scorpion in it. Of the six people in our party, three would not even try this, despite the scorpion being buried deep into the candy. Once the scorpion started to emerge, only two of us were brave enough to “sample” it. To be honest, because it’s encased in banana candy it tasted just like banana. To be even more honest, I have never swallowed anything so fast in my life.

Fans of good burgers need to make their way over to the Hard Rock Hotel and check out The Kitchen restaurant, as it’s here where you will find the best burger on property. The Kitchen Burger is a fresh 10-oz. certified Angus beef patty topped with bacon, cheddar cheese, onion rings, lettuce, tomato, and chipotle horseradish aioli. It’s huge, and and it is incredible. I believe the giant knife that is stuck through it is for you to use against any table mates who want to “share” your burger.

The Kitchen Burger is also part of The Kitchen Sink Challenge, in which guests have 30 minutes to eat The Kitchen Burger, a fried pickle, a side of fries and a slice of the Kitchen Sink Cake, hands down the greatest piece of cake ever invented by mankind. To date only two people have completed the Challenge. The first ever was victor Nick Ranieri, who accomplished the task in a little over 23 minutes. Recently, another guest finished the Challenge in an inhuman 18 minutes.

Located in the New York section of USF and connected directly to Starbucks is Ben & Jerry’s. Lots of great ice cream options here, including smoothies, sundaes, and milk shakes. The true highlight is the Mini Vermonster. Served in a huge tub, the Mini Vermonster contains four scoops of your choice of ice creams and is topped with a fresh baked brownie, chocolate chip cookie, banana, hot fudge, whipped cream and two scoops of your four favorite toppings. FOUR.

This was fantastic as I got to create my Mini Vermonster with Stephen Colbert’s Americone Dream, Jimmy Fallon’s Late Night Snack, Cake Batter, and Strawberry Cheesecake, my four favorite flavors of Ben & Jerry’s ice cream. The cookies and brownie were soft and moist, and the amount of toppings dumped on top contained enough sugar to jump start a corpse. ($15.99 and worth every penny.)

# 2 – The Dagwood Sandwich at Blondie’s (Islands of Adventure)

Like the Green Eggs & Ham sandwich over in Seuss Landing, this over the top concoction sounds better than it actually tastes. However, it is impressive to see in person. The entire theme of Blondie’s restaurant is based around the Dagwood, with references to the sandwich both outside and throughout the entire of the establishment. The Dagwood consists of fresh baked Onion and Poppy Seed Bread piled high with baked ham, Turkey, Roasted Chicken, Swiss and American cheese, topped with tomatoes, Mayo, and Mustard.

As crazy as that sandwich is, as a person who grew up reading the comic strip Blondie and seeing the Dagwood sandwich referenced, I actually expected more. ($8.99)

The snack by which all other desserts will now be judged, at least in my eyes (and stomach). The Brain Freezin’s D’oh-nut Sundae is one of the 28 brand new, exclusive, food and drink items that have come to us in Springfield USA, and possibly the best.

Available at Lard Lad Donuts, the Brain Freezin’ D’oh-nut Sundae first starts with the iconic pink sprinkled donut, straight out of the Simpsons television show. That donut (warm and fresh, by the way) is cut in half, and in-between the two halves is your choice of chocolate or vanilla soft serve ice cream and your choice of one topping (Caramel, Hot Fudge, Rainbow Sprinkles, Chocolate Sprinkles, Peanuts, Reese’s Pieces, and Oreo Topping). Whipped cream and a cherry are then added on the top. ($6.49)

The taste dynamic of the all the flavors combined plus the warm donut and cold ice cream being eaten together is sensational. I’m a huge fan of the Flaming Moe experience. I’ve waited 20 years to have my first Duff. I think the Chicken & Waffle sandwich at Cletus Chick’n Shack is one of the all time greatest foods ever put into a theme park. But if I can only pick one item from Springfield USA? It’s the Brain Freezin’ D’oh-nut Sundae. It’s that good.

So there you have it. Six more outrageous food items at Universal. If this article doesn’t get you hungry, nothing will. You might also want to get checked for adult onset diabetes just from reading about some of these foods!

Special Thanks to crack staff photographer Brandon Glover, for his invaluable assistance with this article. Be sure to also check out Brandon on The Park Blogger podcast with co-hosts Aengus Mackenzie and Brian Carey. 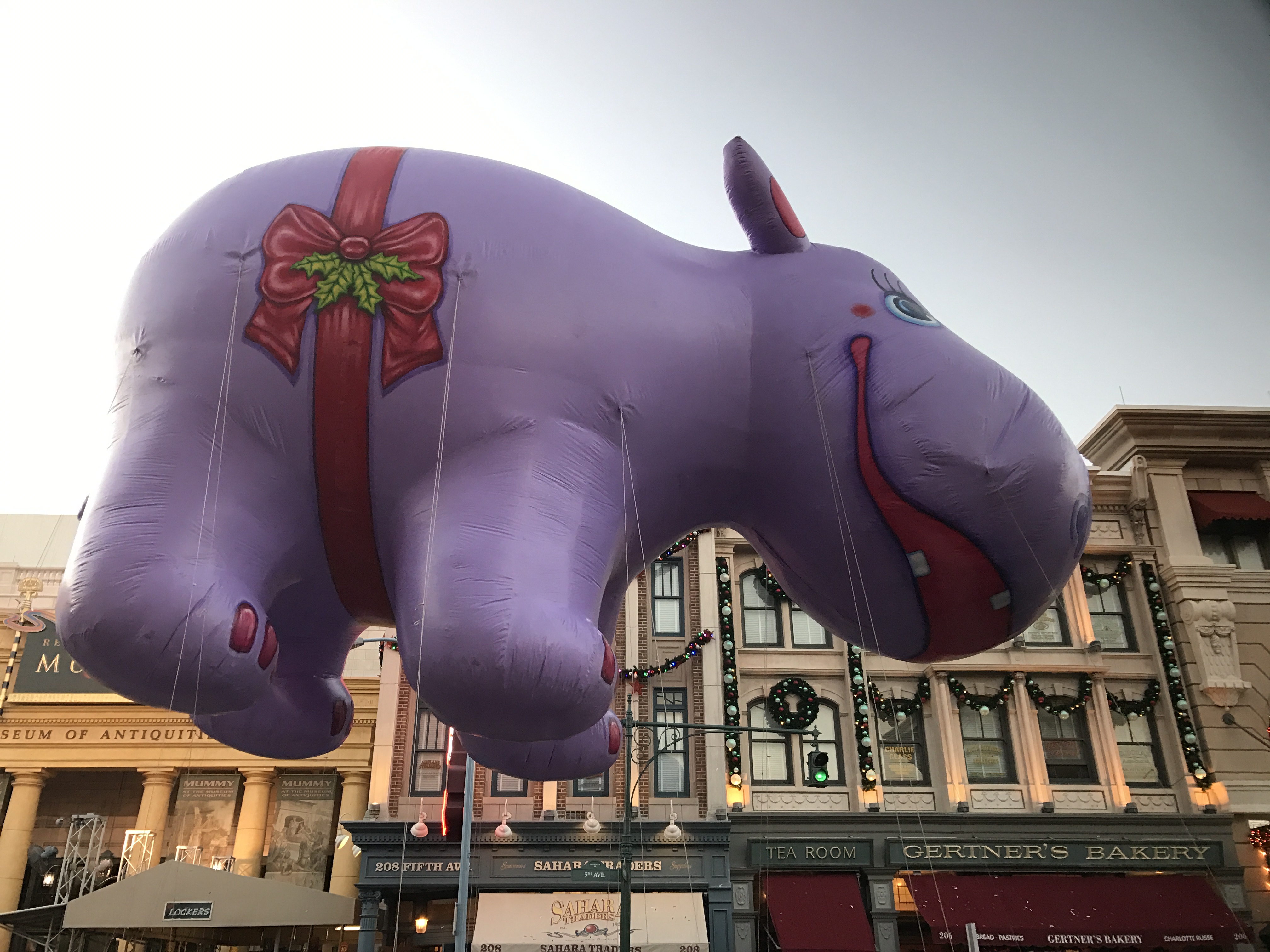