This week’s SATURDAY SIX looks at the Top Six Reasons We Loved The Osborne Family’s Spectacle of Dancing Lights. The Osborne Lights at Disney’s Hollywood Studios are always among the highlights of our theme park year. Sure, we have a great time at the Food and Wine Festival, Star Wars Weekends and Universal’s Halloween Horror Nights – just to name a few of Orlando’s best events – but walking through the lights at DHS every year never fails to take our breath away.

Returning favorites and new surprises made this year’s edition shine bright once again, and today we’re going to look at the top six reasons we can’t get enough. Legend has it that when the Osborne Lights were originally shipped to Walt Disney World from Arkansas (home of the actual Osborne family) there was a black cat Halloween decoration among them. Disney’s Imagineers have used the black cat as sort of an easter egg, putting it in a different place every year for guests to find. If you’d like to know where the black cat is this year, it’s location is described at the very end of this article.

If you’re a fan of hidden Mickeys, then you are in luck as the Osborne Lights is full of them! With over 50 classic Mickey designs spread throughout the area, it might take several trips to find them all. Some are rather large, like this fun basketball one pictured, but others are cleverly hidden and take an eagle eye to spot. Located in the San Francisco area of the Streets of America, walking under this canopy made out of thousands of LED lights is something else to behold and is always one of our favorite things to take in.

Disneyland may have their Nightmare Before Christmas Haunted Mansion overlay, but this year we got a little Jack Skellington in WDW as well. Not only is Skellington a popular meet n’ greet character at this year’s Mickey’s Not So Scary Halloween Party, but Jack – or at least his head – has also returned to the streets of America.

Now this one was a shocker. Baby Sinclair, from the Dinosaurs television show (which last aired in 1994) makes an appearance peeking through a window. What we love about this cameo is the sheer randomness of it all. Of all the shows to pick from, Dinosaurs? Don’t get us wrong, the show Dinosaurs was way ahead of its time and is a classic, but we’re pleasantly surprised there wasn’t a more contemporary reference to a show like Phineas and Ferb or tie in with a movie like Frozen or Planes. Bravo Disney, bravo.

# 1 – The Overwhelming “Spectacle” Of It All

Disney’s Imagineers always deliver on the grandeur that is the Osborne Family Spectacle of Lights.  There’s nothing you can compare it to and is one of the most amazing experiences you can have within a theme park. You are completely immersed in lights. Everywhere you look, even towards the sky, are millions of lights. The windows and balconies of all the buildings are filled with creative touches and details. There is snow being pumped into the air and that combined with the “dancing lights” (when music begins playing at the lights are synchronized with the music) can almost transport guests out of Florida and into a new realm of fantasy. The Osborne Spectacle of Dancing Lights is what makes Disney Disney.

See you next weekend for the latest edition of the Saturday Six. If you had fun, be sure to check out The Magic, The Memories and Merch! articles or the Pardon the Pixie Dust podcast.

Special thanks to Universal NOW!’s Brandon Glover for his assistance with this article. SPOILER ALERT! If you would like to know where the black cat is hidden this year, it can be seen in a tree near a food cart by the  Lights Motor Action stunt show. 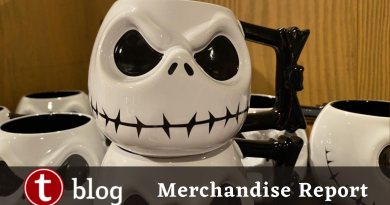 The Magic, The Memories, and Merch! November 2013 Photo Report of the Disney Outlet Store