This weekend I went over to Animal Kingdom to test FastPass+ and to check out the former site of Camp Minnie-Mickey. I thought you guys would like to come with me! Saturday was very cold by Florida standards! The high was only 57 degrees, so I was thankful afternoon FastPass+ slots were available for Kilimanjaro Safaris. I secured our 3:40 – 4:40 time slot. Since all FastPass+ reservations come in trios, I was also assigned FastPass+ to meet Mickey and to see Finding Nemo – The Musical. Upon arriving at 2:30pm I discovered parking attendants weren’t even directing cars where to park! This suggested that crowds would be manageable. Here is what it looked like walking in:

Funny story, I didn’t like the weird angle of my previous videos, so I came up with the brilliant idea of buying a head strap for my GoPro. So if you see a gal in the parks carrying 10+ pounds of camera gear with a GoPro stuck to her forehead, you might have just spotted me. My husband is a saint! 🙂 Anywho- we went straight over to the Camp Minnie-Mickey area and immediately spotted a big empty spot where the bear sign used to be. The walkway was still open, so I walked down until I eventually hit a wall. If you look on the right side of the wall you can see the structure that used to hold the round sign marking the land. It’s still there, but the sign has been removed. What was most shocking to me about seeing this area for the first time was how it really felt like nothing was missing. If you were a regular day guest, I doubt you would even notice that a huge part of the park is closed off. We still had some time to kill before our FastPass+ resrevation, so I stopped off on the Discovery Island Trail. This is just on the right before the entrance to Africa. Even though it has this spiffy sign, lots of people walk right past it. I can’t recommend enough taking some time to explore this and all the walking trails around the Tree of Life. There are so many animals to see! I will follow that up with saying there really aren’t that many animals out on this trail on a cold day! Below is the saddle-billed stork that we spotted. Normally on this trail you’d see macaws, porcupines, and a tortoise. But the only other thing we saw was a sleepy painted stork (below). The trail was mostly a bust on this blustery day. I crossed my fingers that this wasn’t going to be a trend for the rest of the day! From here we walked over to Kilimanjaro Safaris to take a chance on the standby line. It was a whopping 45 minute wait, so we decided to keep on walking and see the 3pm Flights of Wonder show. Pictured below is an animal trainer, Cassie, and a Sulphur-crested Cockatoo. If you can believe, it this bird is 45 years old! Flights of Wonder is a great show! If you haven’t taken time to see it, you absolutely have to the next time you are here. I know you will love it – even if you have F.O.B! (Fear of Birds) This Great Horned Owl below swooped through the aisle next to me. It was so close I swear I felt some feathers! Below is a very handsome Harris Hawk. He flies over the audience several times. They warn everyone not to duck because he will simply fly lower! It’s amazing to watch him just a few inches above the crowd. I must have taken a hundred photos of all the different birds – but I will move on to the rest of our day. Just promise you’ll go see this funny, endearing show – it’s worth the time! Next it was time to cash in those FastPass+ that we’d been waiting on. It was our first time using our annual passes for return times at Animal Kingdom, so I was hoping we wouldn’t have any issues. As it turned out we didn’t really get a chance to find out! The line was wrapped all the way down to stroller parking, and they seemed to be having a problem with the system. Eventually they just let people in with one member of the party sort of scanning for FastPass+. We were just waived through and boarded in less than 10 minutes. I’m not sure if the weather was to blame, but the entire first half of Kilimanjaro Safaris was a bust. Things livened up once we reached the savanna. First up, I saw a waterbuck standing up for the first time ever! These guys are normally hiding, so it was neat to see! We passed several wildebeests, Ankole cattle, and greater kudu off in the distance. Nothing was really photo worthy. All the animals seemed to be hiding off in the shrubs. But then we came around a corner and ran smack into a tower of giraffes in the road! (A group of giraffes is called a tower.) We were stopped for almost 10 minutes while a game warden tried to coax these guys out of the road! You know how you shake the cat treats at home trying to get your cat’s attention? Well picture a grown man shaking a 10 gallon bucket of I’m not sure what. Eventually, all but one giraffe took the bait. The warden told the driver to just drive by slowly and encourage that last one. As we rolled by it begrudgingly crawled into the bush it had been chewing on. Next up were the elephants! I’m very happy to report that the awful burlap fencing that had been up for months is gone! Does anyone know what that was all about? It made it impossible to get good photos of the elephants. For some reason when we drove by all of them were standing perfectly still. I heard several people around me say they looked like cardboard cutouts instead of real elephants! Up to this point the ride had been a little disappointing. But what came up next made it all worthwhile. It turns out the big cats love the cold weather! Check out this photo of a cheetah laying out in the sun!

Just around the corner a male and female lion were perched together just posing for photos! Aren’t they beautiful? Check out the mane on that lion! Anyone else wondering how it stays so perfect without someone brushing it for him? My house cat sure can’t manage that on his own. Due to the giraffe delay, it was almost 4:40pm by the time we exited the safari. The Maharajah Jungle Trek and Pangani Forest Exploration Trail closed at 5pm, so I decided to save some steps and just go next door to Pangani. When we got to the first enclosure, it was empty, and I was thinking this might be a waste of time in the chilly weather. Just then, an okapi walked up out of nowhere like he’d been waiting on us! He even stopped and posed for a moment. I swore I wasn’t going to include these birds again – but look at the pose this yellow weaver bird struck for me! The meerkats seemed to very much dislike the cold. The one lookout was slumped up top but I didn’t see any others. I was surprised to see very active gorillas at the end of the day! Both males and females were moving around, eating , and seeming to enjoy the weather. The baby was even out. When they called them to go inside at 5pm, the baby climbed to the top of a tree and refused to go in for a little while! Sound like any kids you know? 🙂 Of course, I had just switched lenses and missed photos of the whole thing, but here is one of the pretty girls below. I’m also including this very “unofficial” animal because it was so funny. This fat, little rabbit kept stealing food from the gorillas! It would watch, then sneak up, and tear off across the enclosure with whatever little scrap it had taken. For a little while we were all having more fun watching this renegade bunny than the amazing group of gorillas!! We were among the last people to exit the trail. At this point Africa was pretty much closed, so we decided to head off towards Asia. Here is the walled off area as you exit Harambe where they are building the future Festival of the Lion King theater. It’s such a nice walk over to Asia – I thought you guys might enjoy it:

We still had a little time to kill before our FastPass+ time to meet Minnie and Mickey, so I wandered around for a nice photo spot. I was able to get this great shot of Everest in the setting sun. After this we walked back toward Asia and caught this neat musical act. I think I prefer this to the DJ and dancing group I’ve seen in the area on previous trips.

We enjoyed the music and then walked over to meet Minnie and Mickey in their Discovery Island location. It was the moment of truth, and FastPass+ worked flawlessly! We were in to see the big cheese in less than 5 min! They were even nice enough to kiss for their photo! At this point it was 5:30pm, and we realized that our Finding Nemo FastPass+ wasn’t until the 7pm show. We didn’t think we could kill another 90 minutes in the park with all the animal attractions closed, so we decided to take our chances with the standby line and head into the 6pm show. We were able to snag 3rd row seats with no trouble! Finding Nemo – The Musical is another one of those can’t-miss shows! All the performers do such a great job, and the effects are amazing! Not to mention the tunes are catchy! I imagine I’ll be seeing this show even more until Festival of the Lion King reopens this summer. Okay – just one more photo. This show can be tricky, and I finally nailed my settings to get great shots! Plus, the below actor is my favorite Marlin. 🙂 When we exited the theater we emerged into pitch black darkness. No, really, it was dark,and there was almost no lighting! All the people around us were joking that it was time to leave because they’d shut off all the lights. Everyone shuffled towards DinoLand U.S.A. because it was the only thing lit up! We decided to head towards the exit, as the temperature had dropped to a frigid 46 degrees! I can’t remember the last time I was in Animal Kingdom after dark… but it’s creepy! They are going to have to get more lights in there before Avatar Land keeps the park open later.

It was a successful and fun-filled day with FastPass+. One thing I didn’t mention was that while we were waiting for Finding Nemo to begin, I pulled up the My Magic Experience app on my phone and was prompted to move my 7pm slot to Expedition Everest. Not too bad, considering the current wait was 45 minutes. It certainly isn’t perfect, but FastPass+ seems to be improving.

So what do you think? Did you see anything new here? Did you like taking a quick afternoon tour of Animal Kingdom with me? Or do you just hate me for calling 46 degrees frigid? 😉 Please let me know in the comments below and as always thanks for reading! 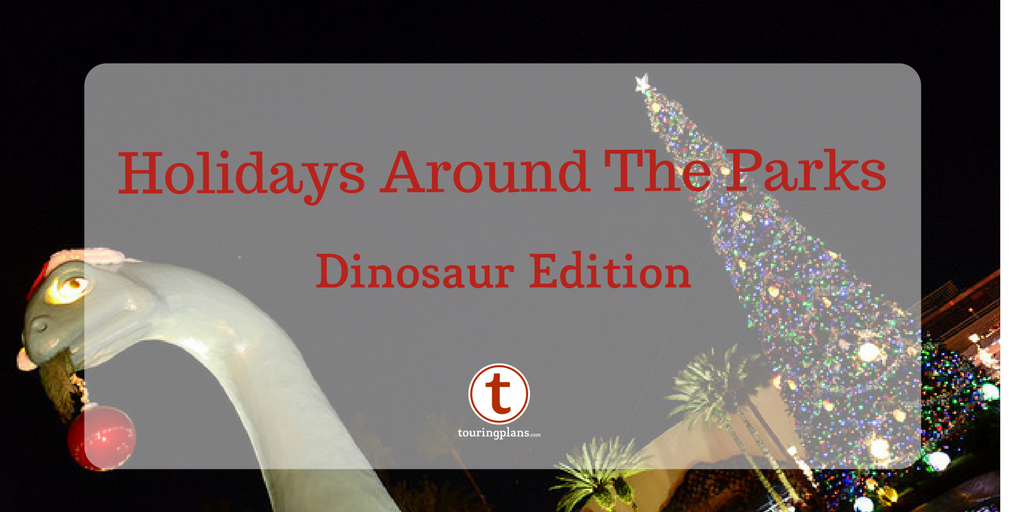 Holidays Around the Parks: Dinosaur Edition