If you’ve been following our PotterWatch series so far, you probably already watched this morning’s Diagon Alley webcast, in which Universal Orlando revealed new details about The Wizarding World of Harry Potter expansion opening this June at Universal Studios Florida. The 30 minute presentation, broadcast from inside a “Gringotts vault,” was hosted by Universal Creative’s Mark Woodbury, and featured appearances from Potter film actors Mathew Lewis, James Phelps, and Evanna Lynch. But just in case you were unable to sign up for a link to the live video, or were stuck at work while it was playing, here’s a quick recap of what was revealed and confirmed about The Wizarding World of Harry Potter — Diagon Alley (as the new area is known): Diagon Alley will be a completely immersive environment with tall buildings that completely block out the rest of the park. There WILL be a fire-breathing dragon perched atop the Gringotts bank, which implies the area is set after the breakout in Deathly Hallows.

Knockturn Alley is a “dark, scary” area for not-so-nice wizards located behind the Leaky Cauldron. It will be located indoors in a permanent nighttime environment.

The name of the headliner ride will be Harry Potter and the Escape from Gringotts. It will be a “multi-sensory, multi-dimensional” indoor roller-coaster through the goblin-run wizarding bank with a highly detailed queue, and will be accessible to the “family.”

Guests must have a Park-to-Park Ticket in order to board the Hogwarts Express train between Kings Cross station in Universal Studios Florida and Hogsmeade in Islands of Adventure. There will be a “magical transition” at Platform 9 3/4, and guests will see Potter scenery via virtual windows during the voyage in the highly-detailed train cars.

Ollivanders wand shop, with triple the capacity of the IoA version and an improved queue. The original shop at the other park will remain. Weasleys’ Wizard Wheezes joke shop replaces Zonko’s in Hogsmeade, which will close soon and be absorbed by Honeydukes. Madam Malkin’s Robes for All Occasions with wizard robes and character costumes.

Magical Menagerie with plush owls and other animals Borgin & Burkes is a shop in “Knockturn Alley” with Death Eater masks and other evil objects.

Leaky Cauldron will be the main counter-service restaurant, serving British fare like bangers and mash.

Florean Fortescue’s Ice-Cream Parlour, with strawberry/peanut butter and many of other unique flavors. The webcast filled in some blanks, but many questions are still unanswered, including:

When these questions are finally cleared up over the next few months, we will have the answers for you here at TouringPlans’s PotterWatch! In the meantime, check out Universal’s new Harry Potter website, and follow skubersky on Twitter for full coverage of this weekend’s Celebration of Harry Potter. 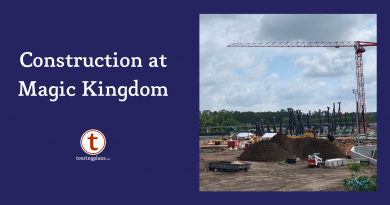