One of the things I love most about writing for Touring Plans is that it encourages me to go out and see things I would have skipped in the past. If you can believe it this is the third annual Easter Egg display at the Grand Floridian, but the first year I’ve stopped by for a visit. I have each and every one of you to thank, because the display is incredible! I couldn’t think of a better way to wish everyone a happy Easter and to share some photos! First the lovely Briar Rose: And on the reverse side of the princess is her Prince Phillip. Can you believe each of these eggs is between 16 – 20 inches tall and weighs over 9 pounds even though they are hollow? Also, in frame you can see a non-Disney themed egg. There are eighteen eggs on display this year so I couldn’t feature all of them. Though I focused on the Disney eggs there are others that are more traditional or themed after famous works of art. They are all exquisite! Another famous princess with her very own egg is Cinderella. Nineteen cast members spent three weeks creating these eggs and were given complete artistic freedom. If you were given an egg what character would you put on it? Personally, I always think Wall-E doesn’t get enough play. (Not to mention painting EVE on a egg is about the limit of my artistic ability!) And the reverse side features the Fairy Godmother with Lady Tremaine and her daughters tucked on the side. The painted background and custom made base on this egg were really impressive! The most popular egg while I was there featured Elsa from the new Disney movie Frozen. I suppose if it’s a 4 hour wait to meet her in person, a photo with an egg is the next best thing! Okay, I don’t know where this little guys is from but is he not just the cutest? Is he from a Disney movie and I just can’t place him? Let me know in the comments below if you recognize him. Also, note on the far right that is yet another egg in frame with expertly piped icing! Here is a wide look at three eggs together. It’s pretty incredible that everything you see here is edible. Just goes to show what some modeling chocolate, fondant, sculpted sugar, royal icing, and Disney Magic can create! This one has to be my absolute favorite of the bunch. Not only does it feature Lady and the Tramp, but check out the base! Yep – they created a candy bowl of pasta for this egg to rest upon. The painting was so vivid on this egg! It’s amazing to think everything was created with edible paint! And finally, the lovely Rapunzel with Flynn climbing her hair. The painting was so beautiful on this egg but even more impressive was all the detail in the base and around the egg. It’s tough to see, but the magic golden flower from the movie is sprouting from the top! Here’s the final image I’ll leave you with. I laughed out loud when I saw this one! But doesn’t Maximus deserve his close up, too? What a great scene for them to choose for the egg! It was nice to see some humor when most featured strictly iconic scenes from films. I hope all of you have enjoyed touring the 2014 Grand Floridian Easter Eggs with me and that you all have a wonderful Easter! Let me know what you’re hoping to find in your Easter basket in the comments below. As always, thanks so much for reading and commenting! 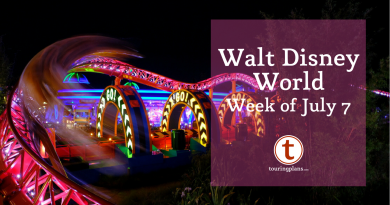