If you’ve been to Downtown Disney lately, you’ll know that it’s a complete construction zone. There are walls up everywhere as the park coverts itself to the revitalized Disney Springs.

Today, it was announced that the update will debut in two parts.  The first part, known as The Landing, will open officially in early 2015. At that point, Downtown Disney will be re-branded as Disney Springs. The second part of the refurbishment will debut sometime in 2016, which will include an updated Marketplace and West Side, as well as the all new Town Center.

When completed, Disney Springs will be doubled in size and will feature around 150 different restaurants and shops, as well as fun entertainment experiences. Disney Springs draws its inspiration from Florida’s waterfront towns and its natural beauty.

Currently, some changes are slated to debut this summer at Downtown Disney.

Two new Starbucks locations, one on the Marketplace side, near World of Disney, which will be a kiosk set up and the second on the West Side.  The West Side Starbucks will includes a covered patio overlooking the waterfront, as well as a fireplace. The location will also feature the new Clover Bar, which will serve special reserve coffees brewed to order. This location will be very similar to what recently opened at Disneyland’s Downtown Disney, with a high-tech screen behind the Clover Bar that will show images from coffee regions around the globe, and a new Human Connection Wall- large touch-screen monitors that allows guests to use their finger to draw images.

Also debuting this summer will be the new Marketplace Co-op. This unique boutique shop will house six different retail concepts. They include:

For those who are excited about the World Cup, a brand new store called United World of Soccer will open in late May, on the West Side. The shop will offer favorite team jerseys, sports gear, cleats, World Cup apparel and accessories.

Finally, Disney will unveil Food Truck Park which will serve as a permanent home to the four Disney Food Trucks. The park will be situated between Bongos Cuban Café and the new Starbucks at Downtown Disney West Side.

Roadwork construction has also started taking place, as Buena Vista Drive will expand from seven to 10 lanes, including a dedicated bus lane. In addition, two parking garages and two pedestrian bridges also will be added, as well as an I-4 Interchange that will offer direct access to and from Disney Springs.

Disney Springs is an exciting revitalization project that I cannot wait to see when it officially opens. It will certainly change the Downtown Disney experience. 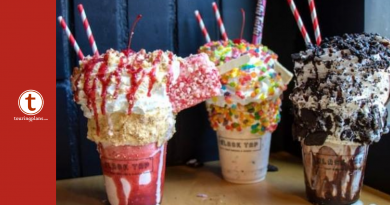