Jambo, Everyone! Welcome to our look at the very blustery opening day of the Festival of the Lion King. When FastPass+ were released just a couple days before, I jumped at the chance to see this show return after a six month closure. Unfortunately, I was only able to reserve the last show of the day. Around 1pm I couldn’t wait any longer and decided to head to the park and attempt to get into the 2pm show through the standby line, even though it was drizzling outside. The new theater looks great and fits in perfectly with the rest of Harambe. I arrived at the theater at 1:45pm and hopped in the line. It wasn’t as long as I’d expected, but I noticed people were only trickling in a few at a time. When I was closer to the podium, I was advised that only standing room was available for the show. I didn’t remember this from the old theater, so I decided to check it out for you guys. Basically, Disney is allowing guests to stand on the staircases around the seating areas and at the very back of the theater. I was pushed off to one side, so my photos didn’t turn out at all. The below photo will give you an idea what this view is like. Full disclosure: this is an older photo from the previous theater. Frankly, the view isn’t very good, and being crammed together isn’t comfortable. If you have the option of going to a different show time, I would skip standing room. When I emerged from the theater, the rain was falling a little harder, so I headed over to Flights of Wonder. I hadn’t tried this show in the rain before, so I was curious if it would be different. Ultimately, some things were cut, but it was still worth doing in the rain. Check out the crane below in the Karate Crane Stance! After the show something happened I’d never seen before. The trainer came out and asked people to stay and help with training a bird. Apparently, they were having trouble with this bird getting confused and landing on audience members rather than completing the behavior! We all settled into our seats and waited while they played the show opening music. A beautiful pink bird popped out of the wall and started to fly across the stage until something spooked him. The poor bird squawked, floundered, and looked like he might just fall out of the air before landing back on the trainer. Everything was set for him to try again, and he completed the behavior perfectly the second time. I really hope we’ll see him in the show in the future, and it was so neat to be invited participate in an extra activity. Unfortunately, after the show it was still raining. In Florida we don’t commonly get rain that just falls all day. Often we see a violent rain storm and then get back to sunshine! Because I expected the rain to pass quickly, I hadn’t followed my normal rain plan and only had an umbrella with me. Begrudgingly, I stopped by Flame Tree Barbecue for a snack and some relief from the storm. You can tell it was raining because even on a Saturday all the outdoor seating was empty. After a bit of waiting, the rain finally let up, and I was able to snap a lovely photo of Expedition Everest before deciding to go wait in line for the Kilimanjaro Safaris. The posted wait time was 30 minutes but I was in my seat in just 25 minutes. While I was waiting in line, the rain began to gently fall again. This time I didn’t mind since I was under cover and the animals normally love wet weather. This proved to be the case; as we started out our safari, the animals were all out enjoying the shower. I even managed to get a good photo of the sable antelope! If you can believe it, in all my hundreds of safaris this is the one animal that I’ve never managed to get on film. Even during the Wild Africa Trek this guy eluded me. They always seem to be far away from the trucks, but the rain had lured them out! So here you are – the impossible to photograph sable antelope! As we continued on it looked like every single giraffe was out and enjoying a snack! I’ve always told people Animal Kingdom is a great park to visit in the rain, and this is why. I was so glad I’d waited in the standby line for this experience! But then, out of nowhere, the crazy storm I’d been waiting for all day appeared. I’m used to seeing heavy rain approach like a curtain, but this rain just started falling without warning. As you can see from the video below, it spooked the giraffes, and they all started running. At the very beginning of the video you can see one giraffe falling. It looks like it slipped, and I started my video when he had two feet in the air. You can hear our driver say he’s going to call it in. (Also, please forgive my slow focusing!)

I wish I had more to share from this safari, but it started raining sideways, and I couldn’t let my camera get soaked. True to form, the elephants were all swimming in their pools when we got to them. Oddly, the big cats were also very active in the rain. By the time our safari ended I was completely soaked! (Umbrellas are useless in Florida rain!) Ironically, I had a FastPass+ window that had just opened for Kilimanjaro Safaris. I figured I was already soaked, so why not? Anyway, I wanted to check on the giraffes and make sure they were still in one piece! As you can see from the photo below, they were doing just fine after their shower. 🙂 They white rhinos were also out enjoying all the fresh mud that was generated from the storm. About this time the rain stopped completely. I didn’t crop this photo so you could get a look at the storm that soaked me in the background. After playing in the rain, all three lions were conked out. After two safaris I was very ready to finally see Festival of the Lion King. I decided to go be the first person in line for the FastPass+ queue. When they stopped accepting FastPass+ for the 6pm show at 5:50pm, I asked if I could start the FastPass+ lline for the 7:00pm show and was assigned a place to stand. However, when I finally scanned my MagicBand 30 minutes later, I received the flashing blue ring of death!! My stomach dropped to my feet. It was the last show of the day, and I had my heart set on bringing you some great coverage! Luckily, the cast member confirmed they’d had some opening day issues and let me proceed. After another 20 minutes we were allowed into the theater. The show is even better than you remember it! I wanted to bring you a mix of photos and videos during the show, but the tumbling monkeys are definitely better presented by video!

The costumes all looked as good as new, and the performers were at their absolute best! The theater looks identical, and the show is exactly as you remember it. I’ve seen a few people disappointed that upgrades weren’t made, but I’m just happy they didn’t cut anything! Your favorite performers are even back in the show. I’d heard from a few cast members that the roof of the building is taller, but that didn’t seem to be the case. The audience participation during “The Lion Sleeps Tonight” is still my favorite part of the show. Please forgive the loud clapping and the cast member who kept jumping in front of my camera.

I could share a hundred more photos, but here are a last couple favorites. It’s so obvious that the cast are proud to be a part of this show. They all looked so happy to be back! Of course, I had to film the finale for you! Please forgive the moment when things go a little dark. A tumbling monkey need a high five… and who am I to deny that?? (Stay tuned until the end for Simba!)

I hope you enjoyed visiting Animal Kingdom on a rainy day with me. Remember to make a rain plan for your trip! Does anyone have any questions or requests for a future observations post? Please let us know in the comments below. I always love to hear from you! 🙂 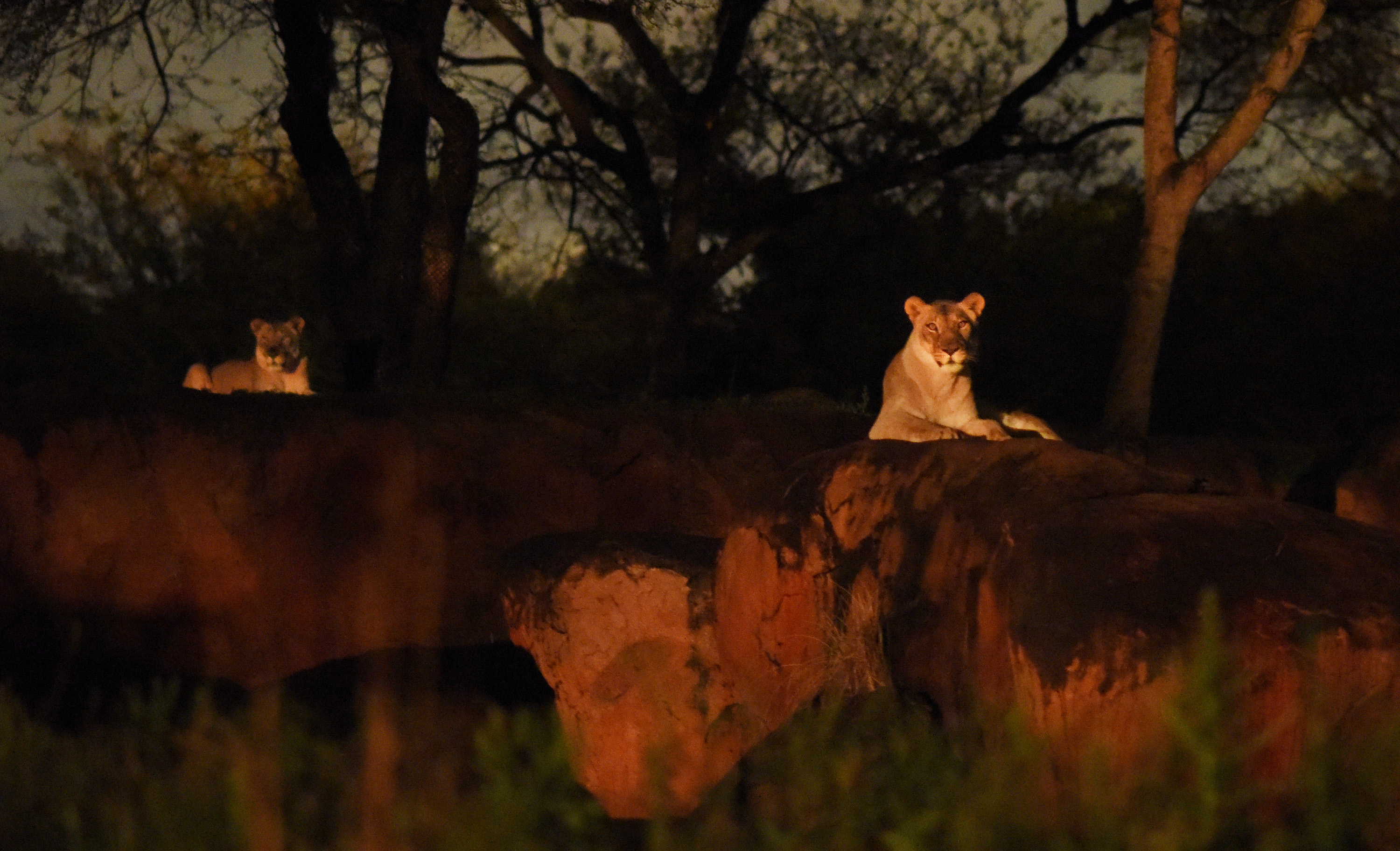 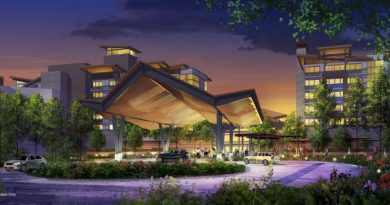