We talked earlier about how it was a rumor, but it now is official: The American Idol Experience at Disney’s Hollywood Studios will close in January 2015.

The attraction, which is based on the experience that performers have in real life on the hit Fox television show, has guests performing in front of a live audience. The audience then, much like on the television show, votes on which performer was the best. The winner of the day receives a Golden Ticket, allowing special front-of-the-line access at any American Idol audition (if their age fell within the television show’s age restriction.)

In a joint statement, Disney and FreemantleMedia said, “After more than five successful years, ‘The American Idol Experience’ will be coming to a close at Disney’s Hollywood Studios theme park in January 2015. Our partnership with FremantleMedia and 19 Entertainment has been a great addition to the park, and we are very appreciative of the amazing cast and guests who have devoted their time and talent to make this experience special and memorable.”

Since the attraction’s debut in 2009, many of the performers on the American Idol  TV show auditioned and performed first on The American Idol Experience stage. Last year alone, three of the top 13 contestants were discovered originally in the park.

The attraction isn’t done providing the show with talent, as many who won this past year will use their Golden Tickets to audition for the upcoming season of American Idol.

This closure will leave quite a large space of land in Disney’s Hollywood Studios empty. The American Idol Experience shares a building with the ABC Sound Studios (the former location of Sounds Dangerous). It will be interesting to see what will happen with this large plot of land.

Menu Monday: Dining with an Imagineer 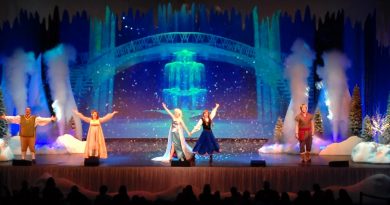 Guests Are Returning to Arendelle – For the First Time in Forever: A Frozen Sing-Along Celebration is Coming Back