Hi, Everyone! Welcome to the Best Week Ever here at Walt Disney World! This week we’re visiting Epcot to say goodbye to Maelstrom and have more fun at Food & Wine Festival. Then we’re heading over to the Magic Kingdom to see what’s new there and ending with a view of Happy HalloWishes from the ferry boat dock. Sounds like fun, right? Let’s go! 🙂

Walking up to Maelstrom this weekend it was very obvious that a cult following had shown up to see the final days of this classic ride. I didn’t try getting near the ride on Sunday but we stopped by Saturday and found the line already 60 minutes long! Luckily I had planned ahead with FastPass+ or I don’t think we would have ridden one last time.  If you’d like to ride one last time along with me then please click to read more! 🙂

The line was very much composed of regular folks, not the blogger centric crowd you normally find at these events. Across the crowd you could just feel the sadness, the kinship that only comes with seeing an attraction at its end. The consensus was that Frozen has no business in the World Showcase. Before getting in the line I grabbed a few shots of signage before they were removed the next day. Below is a video of my very last ride on Maelstrom. I’d been trying for weeks with different cameras and lenses, and I think my last attempt was the best. I’m thrilled to be able to share it with you below!

Also, on the last weekend they were consistently showing the movie, which I haven’t seen running in quite a while. I can remember being a kid when they still really expected you to sit through the movie; when those doors opened we just ran through to the exit. It was sad filming the movie I’d taken for granted for so many years.

Hopefully, Disney will do a great job with the changes coming to Norway. I always felt Maelstrom was a little strange, so I’m excited for something new. Of course, my judgment might be questionable since I did stop by and wait in a small line to meet Halloween Duffy! I promise, a trip to Tokyo will make you hate him considerably less. 😉 Aside from the sad events this weekend, it was the most beautiful few days that we’ve had in months! You’ve never seen such bright blue skies, and the air was crisp and just a little bit cool. It was honestly perfect! With any luck we’ll get some more of that weather in the not too distant future. The only down side was that it really packed in the crowds. Of course, it was worth waiting for some quality Food & Wine items! Pictured below are the fresh baked carrot cake with craisins and cream cheese icing at $3.75 and Florida grass fed beef slider with pimento cheese at $4.00. These were both misses for us. It isn’t that they weren’t decent; they just weren’t as good as so many other things at the festival. Next we decided to try some cheese! First was the artisan cheese plate featuring Cabot Cloth wrapped cheddar, Purple Haze chèvre goat cheese and Cave Man blue cheese for $5.00 (pictured left). For my money this is the best thing at the Hops & Barley booth this year! On the right is kerrygold cheese selection: reserve cheddar, dubliner with Irish Stout and skellig for $4.00 from Ireland. Again, this was excellent! But only if you’re a cheese lover, of course! Of course, what would a cheese rampage be without some Canadian cheddar cheese soup? At $4.25, it’s certainly pricey but so delicious! Honestly, this tiny serving is just perfect. I don’t think I’d ever make it through a full bowl of this stuff! It’s thick, creamy, and a little spicy. Please be sure to stop by and try this little cup of Heaven if you’re anywhere near the parks! Before we leave Epcot I have a cautionary tale for you: DO NOT FORGET YOUR MEMORY CARD!! Earlier in the week we’d stopped by to see Air Supply perform, and I realized I had a camera with me but no memory card. I checked several stores, and they all only had the same 8GB Disney branded memory card for sale that cost $30! But the good news is that you get to see what video looks like from a shiny, new iPhone 6. 😉

Next, let’s hop over to the Magic Kingdom where it was very… crowded. I’m not sure if it was the amazing weather or the runDisney Event that was taking place, but it was packed! Taking a look at the photo below; it looked like this everywhere. By 11:00am Pirates of the Caribbean already had a 35 minute wait! We were also guessing that it might have something to do with the Halloween party pushing crowds to the few days they are open late? Even though Sunday was one of the busiest days we’ve seen in years, the weather was unbeatable. It’s also nice to have the Tomorrowland Transit Authority PeopleMover back in business so you can see this amazing view! Though you can’t see it here, the construction is moving right along in the hub. Hopefully it won’t be too long before it’s all put back together and as lovely as ever. When I got home from shooting I noticed that I’d taken tons of pictures of the bright, blue sky. So forgive me if it seems like that’s all I’m including from the Magic Kingdom. But take a look at the view from Dumbo. You just can’t beat it! A little change this week is that MagicBand readers now light up at all attractions. Apparently people were having trouble seeing them at night, and it was causing delays. While the video below was taken during the day, these are positively blinding at night after the change! Time will tell if it sticks.

Over in Bonjour Village Gifts some new Gaston goodies have appeared. Of course, this wasn’t the only new merchandise to show up this week! If you haven’t already seen our coverage of Memento Mori that opened near The Haunted Mansion on October 6, you can check it out here. Construction has finally finished over at Walt Disney’s Enchanted Tiki Room. At first when we entered the queue nothing really looked different, then I looked up! The photo on the bottom left is just as you enter the line for the attraction. It’s positively hypnotic! We just stood there staring up into it for a few minutes. It’s funny that Disney would put time and effort into something like this that so many people won’t notice, but isn’t that what makes Disney great? Inside, you’ll also notice new barriers separating the front row from the second row. I’m not sure if they had some issue with people changing rows, but now you clearly can’t. Since we were in the Tiki Room anyway I shot a little video for you guys. Who doesn’t need a little tropical serenade to brighten their day? 🙂

This week I was also caught in a moment of desperate hunger and finally broke down and tried the new loaded fries at Golden Oak Outpost. Below left are the fries with pulled pork without the coleslaw. Below right are the BLT fries that have been compared to the now extinct Figaro Fries. At $5.99 each they were an expensive snack and not especially filling. Plus they just felt like eating junk food…I mean, fries covered in bacon and pork?? I’ll be doing extra cardio this week and only recommend them if you’re looking for an extra sinful treat along the lines of a macaroni and cheese covered hot dog! One last little shopping note from the Magic Kingdom: check out these adorable Marie hats! I don’t know that I’ve ever seen these before. The price was right at $27.95, but they were only available in youth sizes. I can’t imagine a little kid wearing this; the universe might explode from too much cute! Just to the right, you can see Marie tails are still available for purchase. The character tails have been out for a few weeks, but I’ve yet to spot anyone wearing one yet. As we were leaving we noticed the new Polynesian Village sign was out from under tarps and looking amazing! We were also by at night this weekend, and the water reflects up onto the sign with lit tiki torches all around. It might be the prettiest sign on Disney property now. Just gorgeous! If this is any indication of the work they’re doing at the rest of the resort, then I can’t wait to see it. Our last stop this week is the ferry boat dock at the Transportation and Ticket Center. This is a spot we like to watch the fireworks on event nights when we don’t plan on purchasing admission. As you can see from the video, you can’t help other people having loud conversations, but that could happen in the park when you’re paying a whole lot more! If you don’t feel like watching the full video, just fast forward to the last 30 seconds and catch the perimeter fireworks.

Crowd Calendar: The lull of September is over. Be sure you’re optimizing your Touring Plans and getting there for rope drop, you’ll need the head start!

Weather: Sadly, we’re back to highs in the 90’s this week. Hopefully fall will be back to visit us very soon. The good news is that at least it won’t be as rainy.

Remember: Monorail resorts are cracking down on parking for MNSSHP dates the rest of this month. Be prepared to be turned away if you don’t have a dinner reservation.

Here’s my top tip for this week: If you’d like to shop at the new Memento Mori be sure to prioritize it like a ride! The shop has been getting lines just to enter and once you’re inside it’s tough to shop in the crowd. Plan to stop by early or late for the best experience. 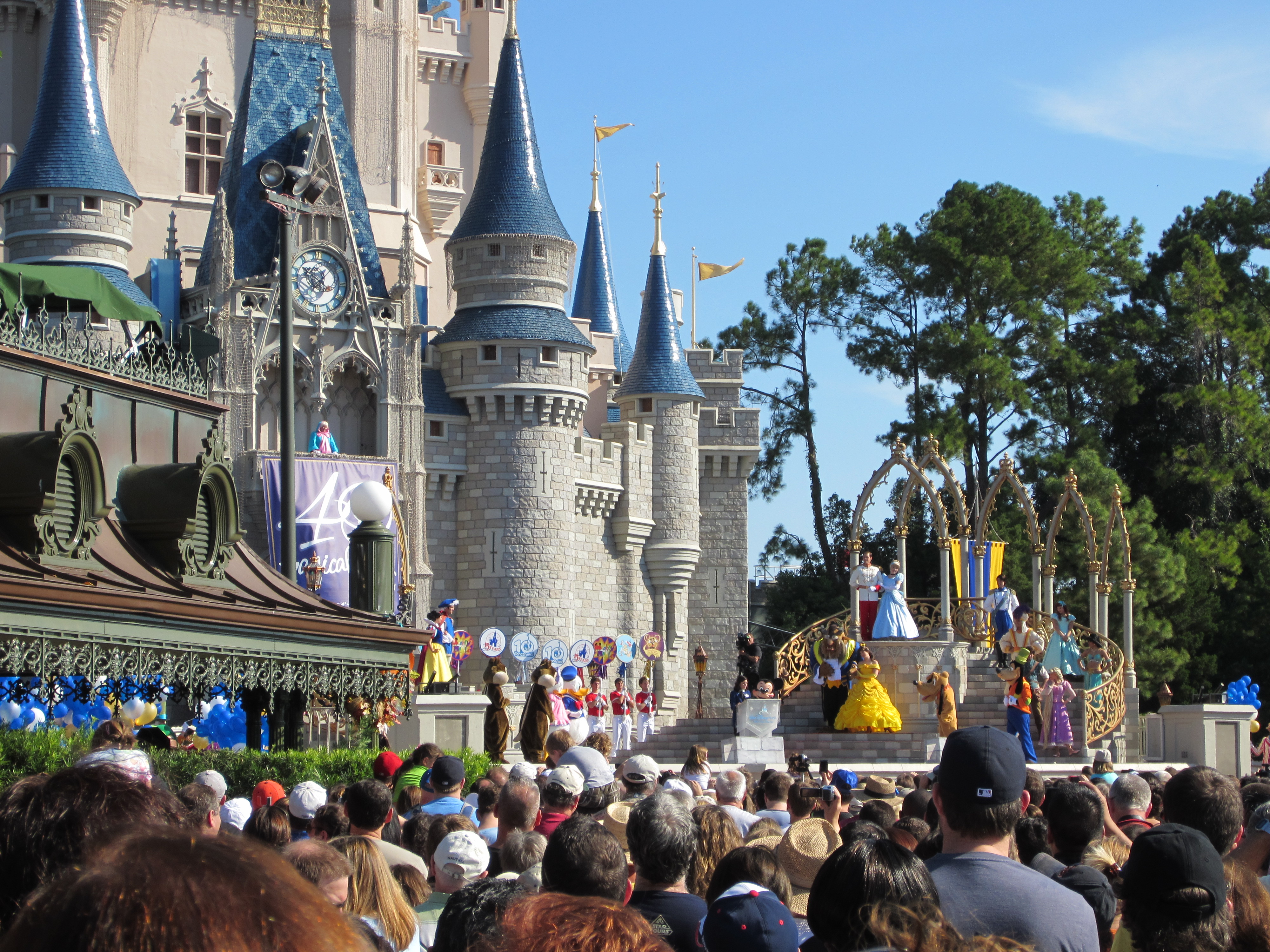 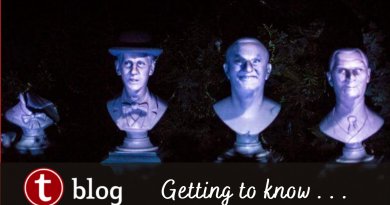