Two brand new restaurants have officially been announced for the Disney Springs revitalization of Downtown Disney.

The first restaurant, which will be brought to life from Japanese master chef Masaharu Morimoto and the Patina Restaurant Group, will be known as Morimoto Asia. The pan-Asian restaurant will include a two-story layout with a fabulous glass entrance, open terraces, a grand hall, private rooms, a long bar, a cocktail lounge, waterside seating, exhibition kitchens, and more. Menu items will include traditional Asian dishes such as Peking duck and dim sum.

According to Walt Disney World Resort President George Kalogridis, “We’re thrilled to bring Chef Morimoto’s renowned culinary style to Disney Springs as we expand the range of dining experiences for our resort guests as well as local Florida residents.”

Morimoto Asia is expected to open in The Landing (formerly Pleasure Island) in the Summer of 2015.

Speaking of The Landing, another restaurant was officially announced for this location. Known as The BOATHOUSE: Great Food, Waterfront Dining, and Dream Boats, this upcscale restaurant was created by Schussler Creative (which has already brought Rainforest Cafe, T-REX Cafe, and Yak & Yeti to Walt Disney World). This certainly seems like a destination restaurant, just like the other Schessler venues.

The BOATHOUSE’s key features will include spectacular dream boats from the 30’s, 40’s and 50’s for guests to admire. The BOATHOUSE will be an expansive restaurant with three distinctive bars, including The Captain’s Raw Bar, The Admiral’s Club Bar, and The Dock Bar, which will be built over the water. Rooms will have a nautical feel and will include The Runabout, Twin Transoms, and The Lake House. There will also be two private dining rooms known as The Regatta and The Trophy Room.

Menu items here will include delicious dishes like steaks, chops, seafood, and a raw bar.

The BOATHOUSE will include other aspects that will delight and immerse guests both on land and on water with live music and Captain’s guided tours aboard The Venezia, an Italian Water Taxi that will feature champagne toasts and chocolate-covered strawberries. Guests can also enjoy guided Amphicar rides that launch from land, that then enter the water and take guests on a 20-minute tour of the landmarks of Disney Springs.

The restaurant will feature additional unique activities like watching as The Harbor Master orchestrates daily flag ceremonies that are accompanied by a lively musical performance of beloved bugle performed aboard an antique steam boat.

Of course, there will also be a shop for guests, called The Ship’s Store, which will sell authentic nautical items like custom engraved paddles, distinctive lake-themed merchandise, and other unique items.

About The BOATHOUSE, Mr. Kalogridis said, “Combining dining with interactive entertainment, The BOATHOUSE helps bring to life our vision of Disney Springs as a welcoming place for guests of all ages to enjoy with their friends and family amid the charm of a waterfront town center.”

The BOATHOUSE is expected to open in the Spring 2015.

Downtown Disney is currently undergoing a massive expansion and re-branding (and if you’ve been to Downtown Disney lately and viewed the numerous construction walls, you’d know just how massive). The updated area will be known as Disney Springs and will feature many different dining, shopping, and entertainment areas that call back to Florida’s many waterfront towns. There will be four different districts: The Landing, Town Center, Marketplace, and Westside. The Landing is expected to open in the Spring 2015, and the rest is expected to be completed by 2016.

Both of these restaurants sound very intriguing. I’ll make sure to share more details about all of Disney Springs as soon as I can! 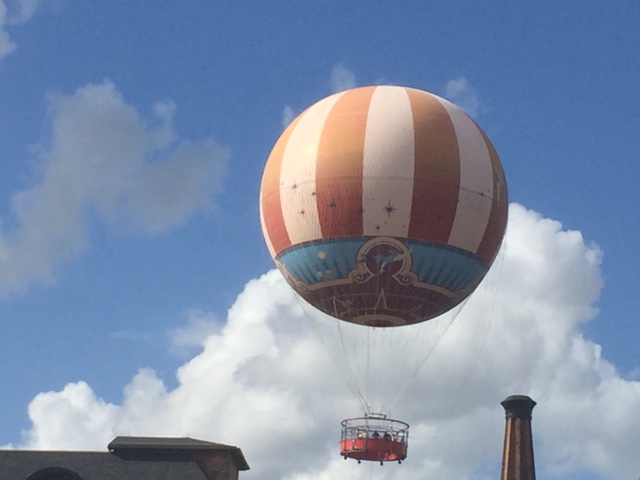 Characters in Flight at Disney Springs to See Update