Hi, Everyone! Welcome to the Best Week Ever here at Walt Disney World! This week we’re visiting the Disney’s Art of Animation Resort to check out a Cars suite. Then we’re stopping in the Magic Kingdom to see some parade taping fun, eating at Liberty Tree Tavern, and playing in the park. Lastly, we’re heading to Downtown Disney and even dropping by Disney’s Grand Floridian Resort! Phew – I’m tired already! Let’s get going! 🙂

I was really looking forward to checking into our Cars suite. I’d previously stayed in The Lion King section, but since I love Cars Land I thought this would be my new favorite. After a stop by the front desk to switch rooms (we’d been in The Little Mermaid section earlier in the week), we were off to the races. Or were we? You’ll have to read more to find out!

Unfortunately, our first trip to the front desk didn’t result in MagicBands that opened our room door. For anyone keeping track, this was door number three of our trip, and our MagicBands worked without additional trips to the front desk exactly once. I read all the comments last week, and I have to say that I’m jealous! I wish we’d had such a positive experience with the new system. Hopefully, it’s all fixed at this point, as we spent quite a bit of time with guest services and tier two support. Fingers crossed! 🙂 In the meantime, being locked out gave me lots of time to take photos around the resort. All your favorite Cars characters are here and bigger than life! If you have a little Cars fan at home, I almost think coming here is more fun than meeting the stars at Disney’s Hollywood Studios. It really feels like you’ve stepped into the movie. About 45 minutes later we were finally in our room, where the excellent themeing continued! You can click on any of the photos below to see a larger photo. While the decor is perfectly Cars, I was surprised that I actually preferred the Lion King room. The Cars rooms seemed a little more sparse and without as many little details. But that’s just me being picky; the bottom line is that I’d stay in a Cars suite any time! However, it seems like a stretch for this room to fit six adults. You’d have to know those adults really well! 😉 If you have kids younger than twelve that might be a bit more realistic. There are a large bed in the bedroom and two pull our sofas in the living area, so I’ll let you be the judge. The suite also boasts two full bathrooms and a kitchenette. If photos aren’t your thing, here is a full walk though of the room:

One last thing before we head out: check out the image that lives inside this fold down bed! We had a nice little surprise (and a big laugh) when we pulled the bed down that covers the kitchen table. 🙂 Now that we’ve checked out the room, let’s head over to the Magic Kingdom for some parade filming! I hadn’t planned to be there for much of the festivities, but when bad weather changed the schedule, I ended up in the middle of it. If you’ve never been there for the parade taping, it’s lots of hurry up and wait. We’d gather into crowds and then nothing would happen for 30 minutes or more. Still, it’s such a cool experience to be a part of it! If you dress right you can even get selected for taping. Below left were the winners of the 3rd season of X Factor singing “Love is an Open Door” from Frozen. Below right is Robin Roberts. There were several more celebrities around, it was just impossible to get close enough for photos! However, a little more accessible was the actual Christmas Day Parade, or parts of it that were rolling by. It’s always funny to me to see every float Disney has ever had from all the parks crammed into one parade. It must look epic to someone who has never visited! As awesome as our Christmas parade is, even I’d be disappointed if I was expecting the one from TV! So where did all this cool stuff lead us? Well, to almost being late and missing our lunch reservations! Time sure flies when you’re having fun! 🙂 On this day we were lucky enough to have a table booked at Liberty Tree Tavern, which is the best LUNCH option in Magic Kingdom for my money. So why do I stress lunch only? Lunch is ordered a la carte, but at dinner the restaurant switches to an all you can eat meal with a hefty price tag. While the food is still great, it’s much more expensive. However, if you can spare the time at lunch, I’d give this one a chance.

I wish I could show you tons of variety here, but nearly everyone at our table wanted the same thing. What was it? Arguably the best thing on the menu! The Pilgrim’s Feast at $16.99 is pictured left, and it’s everything you love about Thanksgiving dinner. While you can see the turkey, gravy, green beans, and mashed potatoes, it’s important to note there is some amazing stuffing hiding under the there too! 😉 Pictured right is a fruit plate for the vegetarian in our group. It isn’t actually on the menu, so remember to always ask about dietary restrictions. Disney is great about working with you to get the right meal! Want to know the biggest benefit of Christmas Day parade taping? The Festival of Fantasy parade doesn’t run until 5pm! After a late lunch our timing was perfect to grab a seat for the parade and enjoy the show. Wow, I’m still impressed with this parade! The floats and music remind me of the quality you find in Tokyo Disneyland! In fact, some of the floats were borrowed from there! Of course, the highlight is the steam punk dragon that breathes fire. I’m always so mesmerized that I miss getting a photo of the actual fire, but it’s my new year’s resolution to get that photo so stay tuned! 😉 With family visiting, I think I’ve ridden the Seven Dwarfs Mine Train more in the last week than I have since it opened. While I still don’t love the roller coaster parts, I finally figured out the photo settings for the show scene. For any of my photography nerds out there, the secret is to not take your aperture too low. I recommend not going below f3; lower than that, the dwarf faces get overexposed. That certainly isn’t the norm for a dark ride, so I thought I’d share. Next, I stopped at Downtown Disney to check out the Christmas decor. In front of Earl of Sandwich a big Christmas tree is up with lots of great photo spots all around the base. Especially if you’re there early in the day, this is a great spot for family photos! At Disney’s Days of Christmas (am I the only one that just call this “The Christmas Store”?) Frozen has found another place to invade. Not only has an entire room been filled to the brim with Frozen merchandise, there are also banners draped all around the building. These are just a couple: Another popular photo spot is this huge banner on the building. It looks like a great, big postcard stuck on the wall and I lost count of how many people pretended to ice skate along for a photo (including my family!). While I am definitely in Frozen overload mode, this is a really cute addition that I hope sticks around. However, the Frozen soundtrack playing constantly in this area could really go… like yesterday.. no really. Over at the Co-op I found some really neat oversized coasters that I hadn’t noticed before (below left). They were only $6.95 each and about six inches across. I would have purchased them on the spot if I’d been heading home, but I decided to pass because I’d have to lug them around the parks. I hope they aren’t gone next week! Below right, you can see the Orange Bird cabinet is fully stocked. At Once Upon a Toy, the inflatable Baymax that had been on display was gone. However, Duffy has been dressed up for the holidays. You can see regular sized Duffy on the right side of that photo to give you an idea of how big this is, with the base I’d estimate it’s six feet tall. Maybe they’ll dress him up for all the holidays! 😉 On the below right is my new favorite ornament, Figment was $17.95 and flying off the shelf. In a previous post I stopped by the Grand Floridian earlier in the season and showed the life size gingerbread house before the Christmas tree was up. Well, I stopped back by this week, and it’s more beautiful than I remembered. Outside the hotel there are bright, white deer glowing in beds of poinsettias. Inside, a huge tree dominates the lobby while piano music plays softly. Even if you never stay at the Grand, it’s worth visiting just to experience the atmosphere! Crowd Calendar: We’re quickly approaching the most wonderful (and BUSIEST) times of the year. Be sure to have your touring plan optimized and be ready for anything!

Weather: Highs will be in the 70’s with lows in the 50’s and the occasional shower. Be ready for chilly and wet nights!

Remember: As the holidays approach, Christmas shows will be offered during regular park hours. Take advantage of this perk and skip the long attraction lines.

Here’s my top tip for this week: Never be shy to ask for something off the menu or help with a dietary need at Disney. Splitsville is the only place on property I’ve ever not been accommodated. You’ll be pleasantly surprised how willing everyone is to help you! 🙂 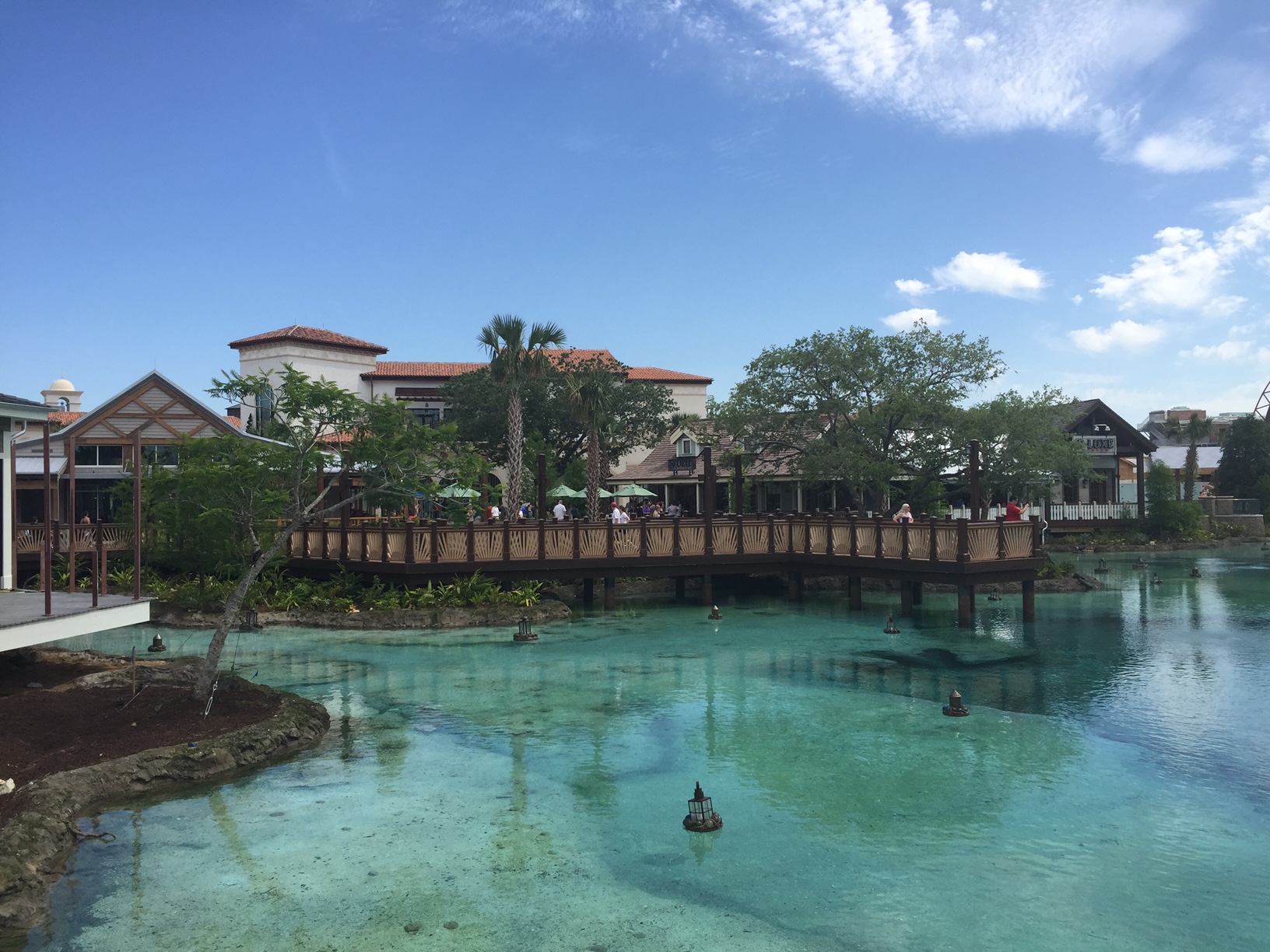