Hi, Everyone! Welcome to the Best Week Ever here at Walt Disney World. This week we’re visiting Disney’s Hollywood Studios and Epcot for some Flower and Garden Fun! Who is ready to take a beautiful stroll through the parks and do a little shopping? I know I am, so let’s go! 🙂

As you can see from the photo, the skies were bright and blue this week. Since we arrived in the evening it wasn’t too hot either! It was absolutely perfect.

Since there wasn’t a lot of breaking news this week I decided to find some new items for sales and just take some photos of the landscape. First up, I noticed this new Mickey figurine for $49.99. There is a switch on the bottom that makes the hat light up. It just adds a little color around the white shapes on Mickey’s hat. It’s very subtle, I bet it would look amazing in the dark! There were also some new Star Wars cook books. I’ve noticed lots more Star Wars goodies showing up – it looks like they are getting geared up for Star Wars Weekends. Want to see what else we saw this week? Be sure to click to read more below!

I think most of you know I’m not a roller coaster girl! When I was walking around this week I managed to catch the light just right to snap a photo of the entrance to Rock ‘n’ Roller Coaster! I couldn’t resist snapping a photo to share. What do you think of this coaster? It’s a bit too intense for me! Walls are starting to pop up around the Studios. Making me wonder what they are up to? On the below left is The Hollywood Brown Derby. It looked like these walls were mainly around the patio and not disturbing service. On the right are walls that have just popped up near The Magic of Disney Animation. They were hiding the statue in the courtyard so it makes me wonder if it might be coming down? This area could really use some love, so personally I’m hoping that’s the case. Back to shopping, here are a couple of things that I realized I shared on Twitter but not here. Below left is a Cheshire Cat “baby” plush. More of these have started appearing lately including several of the villains. I think they’ve taken the baby concept too far! The cat looks creepy. What do you think? Will you be getting one for your kid? Also new is a Graduate Duffy for $30! Now where was that when I was graduating?? 😉 As you can see from the photo below, it wasn’t too busy the evening we were there. Toy Story Midway Mania only had a one hour wait at just a little before 7pm. Below right you can see the construction walls have been decorated where they are installing the third track. Wouldn’t it be funny if the demand for this ride dried up just as they were installing this new addition? Though, it’s such a neat ride. I wouldn’t mind hopping on it more often if the line wasn’t so insane! Back on the streets of America, it’s nice and quiet. The only crowds to be found here are waiting to be let into the Frozen Sing-A-Long or for the few showings of Lights, Motors, Action! Extreme Stunt Show. It seems more likely than ever that this entire back section will be closed for expansion when the Sing-A-Long moves to the front of the park. I’m so hopeful that big things are coming for the Studios! But back to the important stuff, shopping! On the left are new plush being offered that obviously came from Hong Kong Disneyland. (The tags say so!)  These basically have slap bracelets for arms. It looks like they are designed to wrap around the arms of a stroller. I haven’t seen anyone in that parks using them yet, though. Graduate Mickey and Minnie also have shown up recently! Please let me know in the comments below if you’d like any pricing or barcode information. I’m happy to get it for you! 🙂 Below is an awesome Jedi hat. Since it says “Jedi in training”, I assumed it was for kids. However this is an adult sized hat! Again, I’m sure this is just one of many things to come for Star Wars Weekends. Below right is another delivery from Hong Kong Disneyland! While I’m excited to see this super cute merchandise show up in the parks, I hope it isn’t a trend. I was so disappointed when I went to Disneyland Paris and all the merchandise was the same! I hope Hong Kong will stay unique. One last view as I was leaving the Studios is below. I don’t know what I like about this photo, but I was compelled to include it. Even though I know the Studios is going through a rough patch right now, I still love it. I think this photo captures the beauty of the park on a bright, sunny day. Maybe that’s why I like it! 🙂 What do you think? Next I decided it was time to head over to Epcot because the sun was starting to go down. I thought it would be the best park to show off this time of day. Boy, was I right! Even just walking in from the parking lot I was struck by how pretty it was. A couple of things have changed at Flower and Garden Festival recently. First, Donald got a hat! I had to go back and check my old photos to be sure, but he didn’t have one the last time I shared a photo. The other change is much more noticeable!! Take a look at that photo on the right. You aren’t seeing things, they’ve added “globs” of green plants to the fountain. I don’t like it, but my hubby thought it was neat. What do you think? We also visited the butterfly garden and saw butterflies out for the first time. I think it’s because butterflies like warm weather and we tend to avoid the warmest parts of the day. However, this afternoon they were everywhere! The brightly colored ones kept flying away anytime I was close enough for a photo, but this black and yellow one wasn’t shy. 🙂 I submit the below photo as one of the most perfect in the park this time of year. I waited a little while for a monorail to come by and complete the look. Of course, I could have stood here until the sun went down! It was so pretty and quiet. So magical! Of course, when we started walking away I realized this view was behind me. I’m not sure which one I like best, so I shared them both! 🙂 What do you think? Are you Team Monorail or Team Spaceship Earth? (Or like me, Team Both! ;)) Last Flower and Garden update, I finally found the Monsters, Inc. topiary! It was hiding in a kids playground on the way to the work showcase. Of course, I suppose this is technically a Monsters University topiary!  I guess I’m just old school. Pictured below right is a display of the Flower and Garden merchandise for this year. I think this is the best year in recent history for merchandise. I’m still waiting for it to get to the outlet, but I’ll be interested once it’s there. I wanted to try the new grilled cheese cart near Test Track for you, but it was closed. 🙁 There were no operating hours posted but it seemed too early for it to be shut down. Not getting discouraged, I decided a cronut for dinner was justified. If you haven’t tried these, you must!! They can be found just as you enter World Showcase before you reach Canada. If you have tried it, tell everyone why they need to in the comments below! 🙂 Here is one last view as we exited the park. I still can’t believe how pretty the colors are at night! This might be the only Disney landmark that looks better after dark. What a great way to end the day! Crowd Calendar: It will still be pretty slow this week. You can bet I’ll be clocking some hours in the parks enjoying that!

Weather: It will be getting progressively warmer every day this week. but at least there won’t be as much rain. I’d still pack for anything, though! (It is Florida after all.)

Remember: It’s almost time to start calling for Halloween ADRs. Be sure to mark your calendar!

Here’s my top tip for this week: Sometimes, the best visit to Disney is when I don’t ride any rides at all. If you’re lucky enough to go often, then just once let yourself go mull around and take it all in. You won’t regret it! 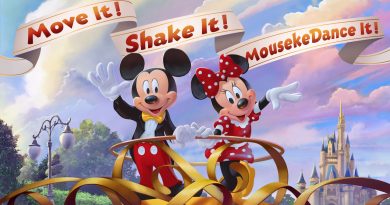