Are you ready for fall? Well, if you are, details are abounding now about this year’s Epcot Food and Wine Festival! If this is your favorite time of year to visit the parks, like it is mine, you count down the days until you can start making your plans! (I’m drinking pumpkin spice tea to get me in the mood as we speak!)

Well, now, we are only just a little over two months away from opening date, which starts on September 25 and will last a total of 53 days through November 16. What makes this year even more special is it is the 20th anniversary of the event! We’ve already heard some initial details, but we now know things like Marketplace Kiosk menus, special event details, and more.

Fans of the the ABC show, “The Chew” will be able to experience the filming of a few episodes that will be broadcast from the festival this year. The TV series will tape five shows with co-hosts Mario Batali, Michael Symon, Carla Hall, Clinton Kelly and Daphne Oz on Oct. 7, 8 and 9 which will air during the week of Oct. 12 -16.

In addition, “The Chew” will be featured in two themed marketplaces located at the new Next Eats area of Future World. This will mark the first time in the festival’s history that culinary experiences will take part in the Future World section of the park.

At the new Sustainable Chew Marketplace, festival-goers can enjoy three delicious dishes inspired by “The Chew” co-hosts. In addition, the eco-home-inspired marketplace will offer guests a chance to learn more about how food is grown and the importance of food sustainability. Herbs and vegetables harvested from The Land pavilion greenhouses at Epcot will flavor the marketplace dishes.

A second new Future World marketplace at Next Eats will feature the Chew Lab, where Disney chefs will collaborate with “The Chew,” to create a cutting-edge marketplace inspired by food-science labs and the hottest culinary tech trends.

In addition, “The Chew” cast will host a new premium event called the Rockin’ Burger Block Party on October 8, with specialty burgers and sliders inspired by top names in the music industry such as Dave Matthews and his Dreaming Tree Wines and Carlos Santana’s Casa Noble Tequila. Two additional Burger Block Parties are set for Sept. 25 and Nov. 6.

Of course, one of the most popular premium event that takes place during the Epcot Food and Wine Festival is the Party for the Senses. Well, brand new for this year will be the Yelloween Masquerade Party for the Senses, an elegant, dance-the-night-away, gourmet tasting party with Champagne, wine, craft beers and specialty cocktails paired with food. Guests will be encouraged to masquerade in chic yellow and black.

Reservations for all Epcot Food and Wine Festival special events will go on sale on July 30.

Over at the Festival Center, there will be a new Monday-through-Thursday “Spotlight on Dominican Republic” which will showcase the country’s culture, crafts and culinary delights with artists and chefs.

In addition, to celebrate the 20th-year of the festival, a few celebratory wines were created including a Napa Valley Festival Chardonnay and a Paso Robles Festival Cabernet Sauvignon. Guests will be able to purchase bottles of these at the Festival Center Wine Shop.

Let’s now dive in to the most popular part of the Food and Wine Festival, which I think has to be the International Marketplace Booths, which are going to be found scattered throughout World Showcase and now in the Future World section of the park too! With the additional Future World booths this year, there are more than 30 different booths you can choose to stop at to try a cornucopia of cuisines. The event really is a food lover’s paradise. Now that we have the menu offerings, I’m starting to figure out my list of where my must-stops will be, and I bet you will be too!

In addition, it looks like there will be a few additional locations serving up treats for the Festival. They include:

Intermissions Café at the Festival Center

For those looking to meet some of your favorite celebrity chefs, take part in the “What’s Cookin With” series. You’ll start your day with a delicious plated brunch joined by a special celebrity guest. Celebrities include:

New this year, kids of all ages can join in the fun and follow Remy via a savory scavenger hunt called Remy’s Ratatouille Hide and Squeak. To take part in the hunt, you’ll need to purchase your map and stickers from Festival merchandise locations including the Festival Center, Pin Central, Port of Entry or World Traveler at International Gateway. Then, begin hunting for the little statuettes of Remy hidden around the World Showcase. Once you’ve found all of the Remy’s and matched the ingredient stickers to your map, you’ll simply show the finished map for a special surprise. 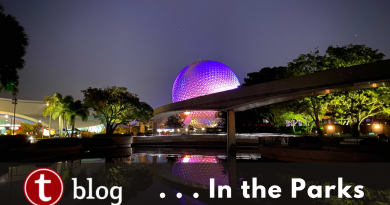 A Walk in the Park: This Week at EPCOT