The conventional wisdom for getting the lowest price on a cruise is to book as early as possible.  But is that advice really true for all destinations? After all, there’s enough competition in the cruise industry to make a 4-night Bahamas cruise almost a commodity, but less competition for extended Alaska and Mediterranean cruises.

To answer this question for the Disney Cruise Line, we gathered more than 5 million prices from DCL’s website over the past two years, for every combination of family size, stateroom category, ship, and cruise. (Yes, that’s a lot of data. Try it out yourself on our DCL Fare Tracker page.)

To simplify this discussion, we’ll looked at the prices for 2 adult/2 child families in Disney’s Deluxe Family Ocean View Stateroom with Verandah staterooms, for sailings in July and August 2015 as follows:

Disney charges different prices for its Deluxe Family Ocean View Staterooms with Verandah (DFOVSV); staterooms on higher decks usually cost more than the same room on a lower deck. In the charts below, we show the price trends for the highest- and lowest-priced staterooms in that category, along with the average price of all DFOVSVs on all decks. We’re using a 20-day rolling average for the prices, to smooth out tiny variations in price over time.

For Bahamas cruises, “book early” is a great strategy, as shown in the chart below. Our typical family would save about 13% – over $600 – by booking 8 months in advance or more, versus booking 90 days out. And because the price goes  up consistently the closer you get to the cruise date, it’s always cheaper to book this kind of cruise as soon as you can. And that’s true regardless of whether you’re booking a stateroom on a high deck or a lower one. The “book early” strategy seems to work almost as well on 7-night Alaska cruises on the Wonder: The price lines are a little more choppy, reflecting variations of less than 1% in the cost of the cruise, but the overall trend is for prices to increase as time passes. If you’re interested in booking the cheapest of these staterooms, though, there’s a minor dip in the 3-to-5 month booking window during which you could save $100, instead of booking 5 to 6 months out. A hundred bucks is a lot of salmon cakes.

Pricing strategies get a little more interesting when looking at the Fantasy’s 7-Night Western Caribbean cruises: On these cruises, “book early” is a great strategy if you want the least-expensive stateroom in this category – again, those are typically on the Deck 2. If you’re looking for something on a higher deck, however, your best bet is to book within 2 months of departure, with savings of up to $200. Granted, $200 isn’t much on a cruise that approaches ten grand in cost, but it’s enough for a nice meal at Palo, or the wine pairing at Remy.

The other interesting thing to note about these prices is how remarkably stable they are. The Fantasy’s a big ship, and there’s lot’s of competition for Western Caribbean cruises, and those definitely contribute to predictable pricing.

The most variable pricing we found in this study is with the Magic’s Mediterranean itineraries: If you’re thinking about a Med cruise within the next year, though, 7 to 10 months in advance is the absolute worst time to book a cruise. Cruise prices seem to peak during that 90-day window. Why? Most families plan their big annual vacations in late December and January, for travel during the summer. My theory is that 7- to  10-month window falls right on those dates, when families are doing their planning and demand is highest for these cruises. Prices are lower in February, March, and April, presumably when people are preparing their tax returns (and seeing how much they owe), then jump up again around 80 or 90 days out from departure (maybe these are the people who got refunds and are splurging on a cruise!).

Admittedly, my theory’s a stretch. Things like the springtime drop in the value of the Euro or the introduction of low-cost airlines to Europe probably influenced demand at least as much as the annual U.S. tax cycle. Post your theories below. 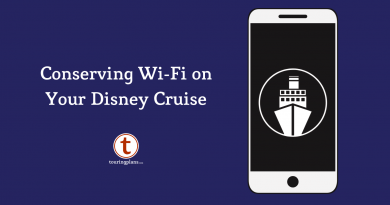 10 Steps to Conserve Wi-Fi On Your Disney Cruise