If you are excited about Jock Lindsey’s Hangar Bar, I have extremely good news for you. You will be able to visit the unique dining establishment beginning next Tuesday, September 22 at Downtown Disney in Walt Disney World.

This new restaurant will be aviation-themed and is named after the pilot from the Indiana Jones films. The restaurant is located in between Paradiso 37 and the BOATHOUSE with seating both indoors and outdoors for 150 guests.

Menu items for Jock Lindsey’s Hangar Bar will include Dr. Elsa’s She-Deviled Eggs, which are brined in beet juice and include lump crab filling; “Good” Dates which are goat cheese-stuffed dates with Marcona almonds and pickled veggies; Snack of Ra is a taste of Africa with salads and dips served in injera (bread) and naan crisps; Tanis Tacos, filled with falafel, shredded lettuce, and cucumber-tomato salad; pretzels with house-made mustard and beer-cheese fondue; Rolling Boulder Sliders, three spicy meatballs served on mini-buns with yogurt sauce; Brody’s Brats, grilled bratwurst with mustard and pickled cabbage; Lao Che’s Revenge will be spicy Asian chicken wings; and a fried calamari flatbread with spicy harissa called “Squid! Why’d It Have to Be Squid.”

Beverages will include beer and wine, as well as clever cocktails called Reggie’s Revenge, The Fountain of Youth, Hovito Mojito, The Bitter Barkeep, Anything Goes, The Aviator’s flight and the Scottish Professor, and the Cool-headed Monkey.

Jock Lindsey’s Hangar Bar is the second restaurant that will open this month. It was recently announced that Morimoto Asia will open on September 30.

I think Jock Lindsey’s Hangar Bar be an experience that guests will want to make sure they want to visit on their next trip to Downtown Disney. 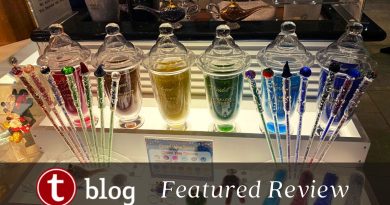