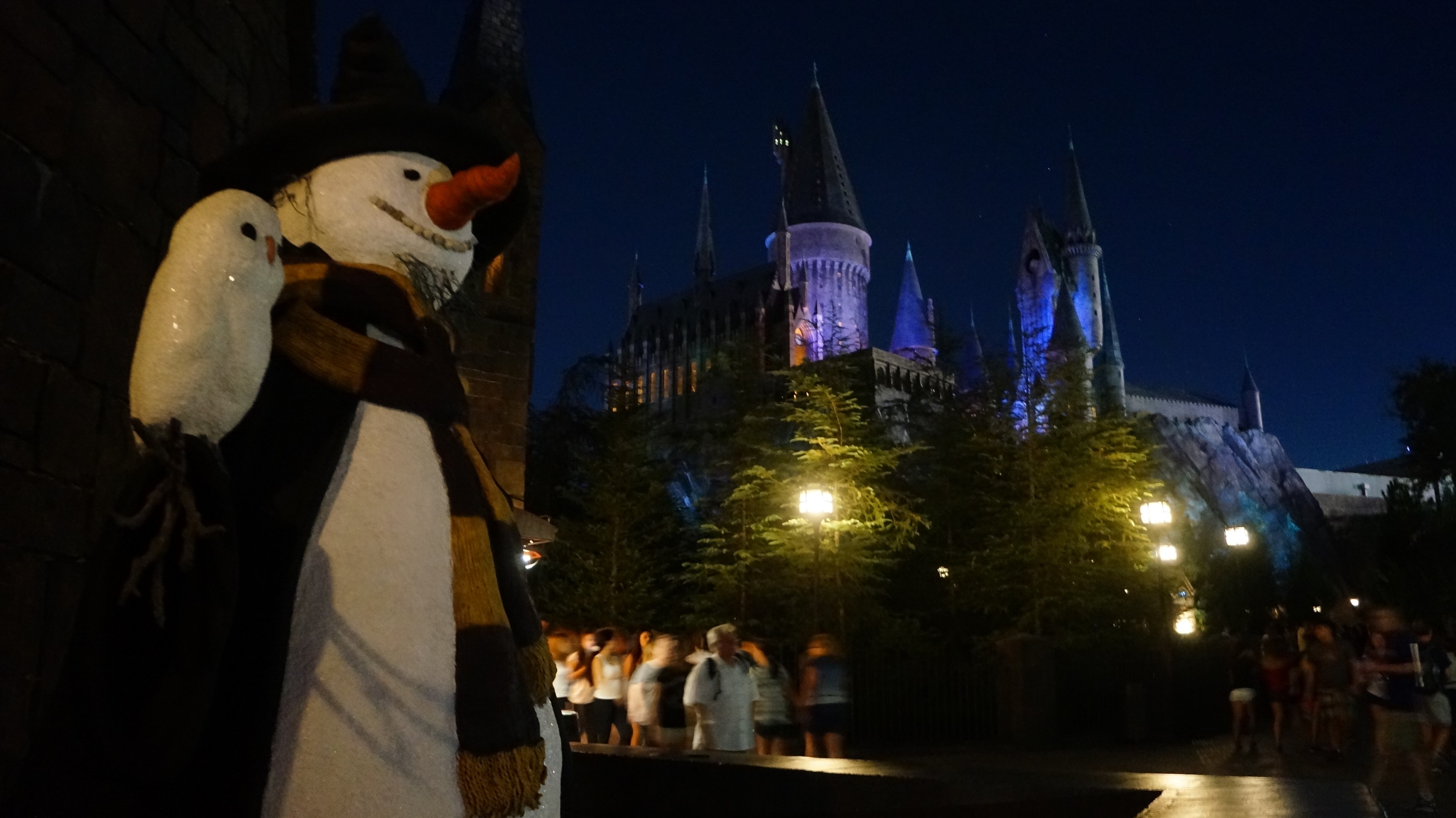 Here’s the good news. One of the most important parts of getting into the holiday spirit when visiting theme parks, the decorations, are practically fully up right now. Over the next few weeks the finishing touches will be put on, but enough sparkling ornaments and garland decorate the two most festive spots in Universal Studios Florida to put you in the spirit. Every year I love seeing the Christmas trees on the R.H. Macy’s facade and the delicate snowflakes on the Paradise theater facade, both in the New York backlot area. This section of the park is where you will find the big Christmas tree (though during my visit this weekend it was not yet up). While you’re visiting the New York backlot, stop in at Finnegan’s, my favorite theme park restaurant, and very festive to boot! Over in the Hollywood backlot section the term “tinsel town” is more appropriate than any other time of the year. The decorations here are bright and beautiful. Each facade has its own color coordinated decorations. One of my favorites is the Christmas tree made entirely of gold balls, on the balcony of “dance studio”. Pop into the shops and counter service dining locations

No need to buy anything or order anything to eat, unless you want to; a stroll through most of the merchandise shops and counter service dining locations will give you plenty of holiday eye candy. Every year I almost forget that each counter service dining location decorates for the holidays. It’s a nice pleasant surprise and the decorations’ colors match each location nicely. And of course what would getting into the holiday spirit be with out some wonderful window shopping. You’ll find lots of dressed up window displays all throughout the parks. And be sure to at least peak your head into the main entrance of each shop so you can get an eyeful of the decorations inside. Of course the cream of the crop shops are the two year-round Christmas stores, one in each park. Sure, they’re open every day of the year, but there is something almost magical about walking through these wonderlands during the most wonderful time of the year. Have visions of sugar plum fairies dancing in your head? It really doesn’t feel like the holiday season without a few sweet treats, right? Universal has some nice candy shops in both parks, one near the front of each park. But the best candy shop you’ll find in the parks is certainly Honeydukes. There’s so many tempting treats in this shop. And of course its location inside Hogsmeade Village makes it a very festive place, it almost looks like the inside of a gingerbread house. Stroll through Hogsmeade Village at night

The key here is to visit at night time. The snow covered roof tops, the smoking chimneys are enchanting at night. If you are lucky enough to visit on a night with some rare chilly weather then you must grab a hot butterbeer at the Hog’s Head Pub. Be sure to stroll up towards Hogwarts Castle and gaze at the vantage point near the snowman. Seuss Landing gets ready for Grinchmas

By far and wide the most festive place in all of Universal Orlando is Seuss Landing, home of Grinchmas. I absolutely adore Grinchmas and can’t wait for it to officially begin. However, even though we have a few more weeks of waiting, Seuss Landing is almost fully decorated. There are so many decorations here, even the necks of giraffes on a sign have wreaths around them. As a Florida girl my favorite decoration in all of Universal Orlando are the bows that are put around the trunk of two leaning palm trees near the entrance to Seuss Landing. Sadly, on my visit most of the decorations were not lit up at night, but it still put some holiday cheer in my heart. You might not expect CityWalk to get too into the holiday spirit, but sure enough there’s plenty of decking the halls here. Upon arrival to CityWalk you’ll pass by the Hollywood Drive-In Mini Golf, where you can spot a haunted house with a holly jolly appearance. Throughout CityWalk you’ll find carts and kiosks with tinsel and garland. And at night take a walk past the night clubs for some nice holiday decorations. The most festive of the clubs is Pat O’Briens, definitely worth a visit during the holiday season. While we may have a few short weeks left of waiting for the full festivities to start, you can see there are quite a few ways to get into the holiday spirit at Universal Orlando right now. This is my favorite time of year, especially in the magical city of Orlando. I hope you get a chance to enjoy and have yourself a merry little holiday season! 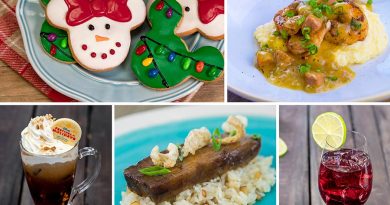 Menus for the Disney Festival of Holidays at Disney California Adventure