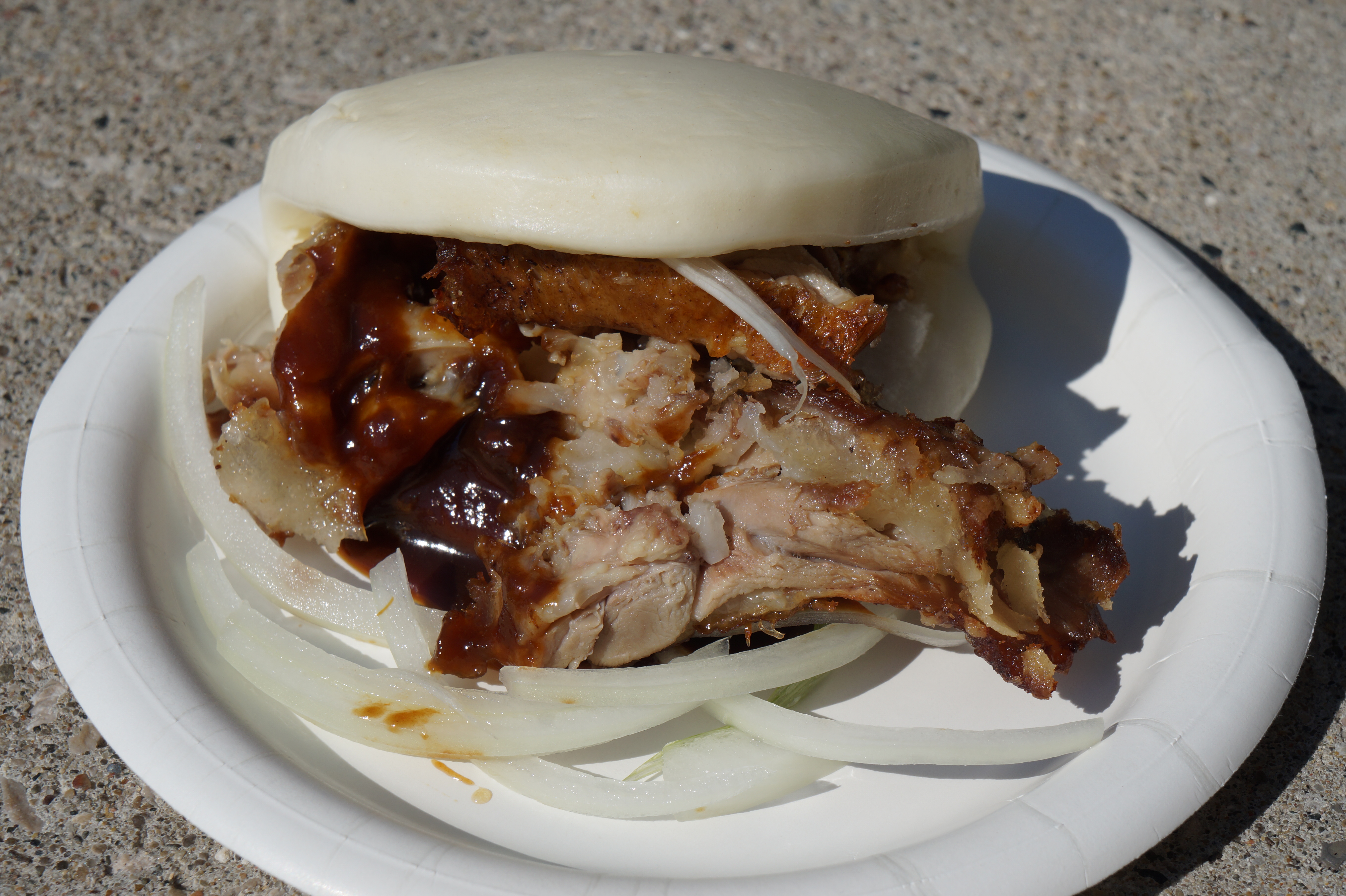 It’s almost Christmas… well, *my* Christmas. Epcot International Food and Wine Festival opening day is quickly approaching, and it’s time to start strategizing how to tackle all of the great eats during your trip around the World (Showcase). To do that, I’ve made “quick pick” lists full of my favorites from past years in a few categories: classics (great for festival first-timers), dishes that are great for families with kids or picky eaters, dishes for adventurous eaters, vegetarian picks (that even carnivores will love), and of course, a few drinks. I’ve included new picks in some of the categories that I’m looking forward to, and also some tips and tricks for making the most of your time (and finding the shortest lines!) at the festival booths.

This booth’s menu rarely changes because it’s always consistently good. Definitely stop here early in the day, as it is one of the first booths in World Showcase and lines grow quickly.

Great walk-around finger food to enjoy while strolling Epcot. Only a few bites, but the potato chip crunchies make this a fun take on a classic dish.

A consistent favorite, usually heavy on the lobster and served on a heavenly butter-grilled bun

Who doesn’t like mac & cheese, especially when it has bacon and other toppings? This can be a lighter portion, but one that nearly everyone will enjoy

The beer-braised beef returns this year with a new presentation (no more potato leek waffle). This booth can be a little slow, depending on how many are ordering sweet waffles (made to order), but it’s worth the wait for this dish.

Mexico is always a must-stop for desserts for me – every year they make something slightly different, but always tasty, and this flan is sure to fit that pattern. A great stop for the very end of the night, when this always-busy booth’s line tends to be shorter.

This dish debuted last year and became an instant classic for pretty much everyone. It’s usually rich enough to share, and it’s always a blast to watch them freeze the truffles to order.

Perfect bites for families with kids or “picky eaters”

Again, who doesn’t like mac & cheese? This rich dish is a variation of the baked mac and cheese found inside Biergarten, and it is just ridiculously heavenly. A good stop if you are worried Farm Fresh’s version is too veggie-heavy, and usually a pretty quick line.

Most kids love bacon, and this is exactly that, just with the addition of a nice stew of black bean and tomato. Full of savory flavor, this dish will be a winner for many, and bonus – there’s a really cool seating area at this booth, too!

Because the duck is roasted and pulled, it’s a little more accessible and less scary to most people, plus the buns are easy to eat – think of this like a Chinese taco or sandwich. China’s booth Cast Members will also readily leave off veggies or sauces if little ones are scared of them, but the sweet hoisin sauce on this dish is usually a hit with kids, and is a great introduction to how savory and sweet can work together in one bite.

Usually served in a cool bread bowl, the mild meatball flavor is sure to be a hit with any kid who loves mom’s spaghetti and meatballs. The spicy tomato chutney that the meatball is stewed in has always been more smoky and sweet than spicy to me.

A little spicier than Sanaa’s mild version (though not so much most kids can’t handle it), this dish is in a booth that’s rarely busy (so it makes for a quick stop!) and includes tons of veggies that are easy to eat around.

Pickled beets sound scary, but the sweet, tangy, earthy flavors are really fresh and perfect for a late summer afternoon snack. This salad has been around in various iterations at both the Food & Wine and Flower & Garden booths for a few years, and is always a can’t-miss for me.

Last year, France moved from the tiny bread bowls with each snail inside to this baked croissant with three escargots total, drizzled with parsley and garlic sauce. This is easily the most accessible version of the escargots, baked in a super buttery croissant with tons of that delicious garlic flavor throughout. Easy to share if you’re worried you won’t like it (but I promise, you will). Great way to try escargot for the first time.

This used to be a staple at the South Korea booth, but became a fixture at neighboring Refreshment Cool Post. Spicy, sour, and tangy flavors abound here in a few bites – you may find yourself wanting another one of these after your first sampling.

This one sounds a bit more exotic than it is – think of it as steak with mushroom sauce and sweet potato dumpling. Great flavors here – an easy way to get a red meat fix if you don’t feel like sweating it out in the always-busy Canada booth line for mushroom filet.

I’m excited for a new vegetarian dish from the always-popular and usually-great Japan booth. Sounds like a nice snack to enjoy wandering between booths.

Vegetarian dishes that are also good enough to tempt any carnivore

You’d never know there wasn’t any meat in this dish, and you won’t miss it- the real star here is the BBQ sauce and the cucumber kimchi (not as scary as it sounds – really just like slightly spicy pickles).

The Chew booths were full of great food last year, but rarely high-trafficked, making this dish a double winner in my book, for both taste and ease of acquisition.

A good cheese plate is a thing of beauty, and this plate is usually worth a stop at least once. Be sure to try the Artist Palette (such a cute presentation) with wine pairings for each cheese, as well.

The perfect snack between booths, these baked cheese bread bites are kind of addictive (and an easy sell, as they’re usually one of the cheaper options at the festival).

New to the festival this year, but sure to be similar to the hummus fries already available at Spice Road Table, just loaded, these should be a hit. Morocco’s booth traditionally stays pretty slow throughout the day, so this is an easy stop during the busiest meal times on weekends.

These are brand new this year, so I can’t offer any insight on flavor or whether it’s worth a stop, but it’s definitely going to be on my list of new dishes to try. These could scare off a lot of non-vegans by description alone, but recent years’ vegan dishes have proven these chefs can pull it off (anyone remember the amazing Colorado chili from Terra booth?).

A great alternative to a margarita, this drink is refreshing on the early, hotter days of Food & Wine. Perfectly paired with the pão de queijo for a snack.

All of China’s drinks pack a punch (no pun intended), and this one is usually a top-seller. China booth is usually a little slower mid-afternoon (and tends to be very popular during dinner hours), so stop by earlier in the day (and be sure to hydrate!).

Another refreshing drink featuring a decent pour of high-quality liquor – a rarity in Food & Wine drinks.

This drink is a return favorite from last year, refreshing and great alongside the Korean BBQ dishes.

They’ve featured alcoholic push pops for the last few years at the France booth, and they’re always very popular. I find them to be a bit messy (and very boozy), but they’re novel and usually worth a shot at least once in the festival season. Be prepared for a long wait nearly any time of day at this booth, but the earlier, the better.

So many awesome beers are featured everywhere during the festival, but my return favorite is this lemon-y, light Hefeweizen mix of beer that is the most refreshing flavor ever. Brewer’s Collection introduced us all to the glory that was Schöfferhofer grapefruit beer a few years ago (now a permanent fixture at the German beer cart), and now we get to greet this beer’s cousin for a second year at the festival.

Move over, Pumpkin Spice Latte. This is going to be our new fall drink, I can already tell. New to this year’s festival, and at a traditionally less-crowded booth, this seems like an easy must-try for anyone looking for a taste of fall. A non-alcoholic version is also available, so everyone can partake in the fun.

With so many great options at the Food & Wine festival, you’re sure to find a few favorites from returning dishes and new tastes, alike. Be sure to check out Julia’s posts about returning favorites and booth overviews, plus the full menus to get even more insight into what’s to come at this year’s festival. I’ll be back just after the festival opens to review new dishes as well as a few of the most popular returning dishes, to help narrow down your must-do booths for this fall! 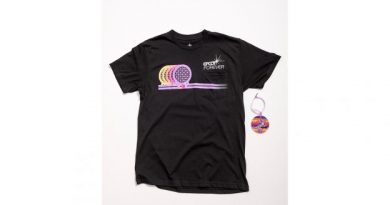 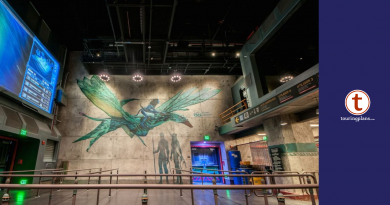