It’s been one crazy fun week! I hope yours has been good too!

With that, there’s been a lot of fun Disney news too. This week, learn about how you can Disney yourself, why you shouldn’t push the red button, and more.

Orlando Sentinel’s Dewayne Bevil wrote an intriguing piece this week. It’s about minding your manners when enjoying the popular Candlelight Processional at Epcot. What do you think?

Disneyland…are you ready for a really cool experience? Splitsville is officially headed to Downtown Disney! You will be able to look forward to experiencing this unique bowling alley.

Eddie Sotto shares his experience with the process of building Disneyland Paris’ Main Street USA this week. This is a fascinating read, for sure.

Make yourself into a fun Disney version of yourself!

How awesome! John Krasinski is going to be narrating the upcoming Disneynature film Born in China which is due out next year.

Rogue One got some high praise this week. One week to go.

Congratulations to the team behind the song “Try Again” from Zootopia. The song was nominated for a Grammy as one of the Best Songs Written for Visual Media.

Whatever you do…don’t push the red death button. But you should definitely press the play button to catch the newest teaser trailer for Guardians of the Galaxy 2.

This is great. See how Disney created the amazingly stunning water effects, as well as how they created the living volcano in Moana.

Learn a little bit more about the upcoming film Coco. What do you think about this Pixar release slated to come out next year?

Did you love the wonder and how visually stunning the short Piper was? Learn how the short was created.

The Macy’s Parade is a popular part of Christmas at Universal. Catch what’s new for this year’s parade. What do you look forward to seeing each year?

Is Universal looking at using drone technology in its parks? According to a recent patent, the answer is yes. Curious to see how they will utilized drone technology, as the concept art is quite interesting.

What did we miss? Attach your ideas to a Mickey and Minnie Fleece Holiday Throw and send it to blog@touringplans.com with the words “In Case You Missed It” in the subject line. 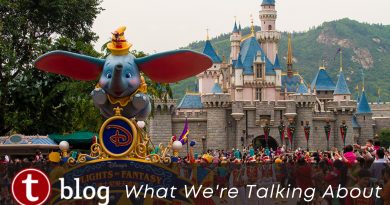