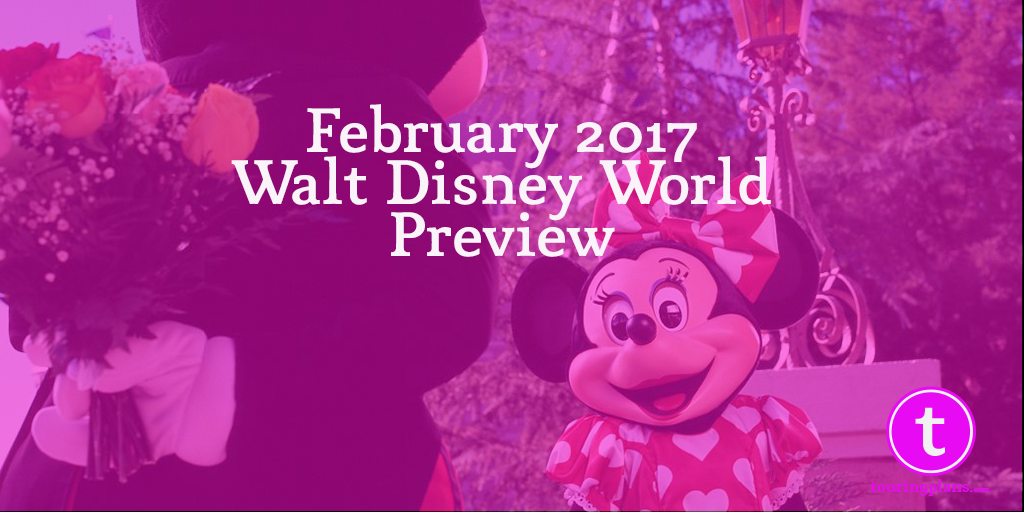 Welcome to TouringPlans’ Walt Disney World February 2017 preview – how are your resolutions going? I still have a few in the running and I bet you do too. Maybe they even include a trip to Walt Disney World. Way to go, us! Who’s ready to jump into February with both feet? Read on.

Low humidity, not too much rain. You may not be spending too much time in the pool in Florida in February, but it’s all around pleasant. Be prepared for chilly mornings and evenings by packing layers.

Both Brian and Angela are hosting regular Live Q&As. Make sure you follow our Facebook page and Twitter for the exact times and topics. You can also reach out to our fabulous hosts with questions or ideas for chat topics.

February is not a bad time to travel to Walt Disney World. With the exception of President’s Day week/weekend, we see manageable crowds all month long. Do check your park hours this month. There are days when Magic Kingdom will close as early as 8PM and Hollywood Studios as early as 7PM. Epcot and Animal Kingdom have  consistent hours all month with Epcot always closing at 9PM and Animal Kingdom at 7PM. Every day a there will be a park with morning Extra Magic Hours, evening Extra Magic Hours, or one of each (Fridays). Read more about Extra Magic Hours in our Walt Disney World Basics.

It’s always good to notice that the first half of the month is Value ticket pricing, which means Disney expects lower crowds. Saturday the 18th is the first day of Peak pricing, with a one day ticket to Magic Kingdom costing you $19 more that a visit the day before would. Confused about seasonal ticket pricing? Read this article from when it was first announced.

For day by day park recommendations for travel during February, check out our Crowd Calendar.

You may still be able to get your dining reservation for the 14th, but don’t hesitate any more unless you want to have your romantic dinner at 5:00 or 10:00. Look for commemorative merchandise of the pink and red variety this month.

Be prepared for the highest crowds of the month over this long weekend.

Festival of the Arts continues this month and it’s a big hit with visitors. A tribute to all the arts, but mostly culinary, Festival of the Arts lets you enjoy Broadway entertainment, the visual arts, and of course the food and wine booths that seem to be required year round at Epcot. Not that we’re complaining. Some of these actually look to be a cut above.

February’s Disney on Broadway series at the festival is:

After Hours is back at Magic Kingdom on the 2nd, 9th, and 16th. I know a lot of people are surprised this returned given how few tickets were sold last year. I have to say, I really enjoyed the event when I went.

Also, February is the last month for the “test” cabanas in Tomorrowland.

It’s Princess Half Marathon Weekend time! Best of luck to everyone participating in the February 23 – 26 event which includes kids’ races, a 10K and a half marathon. Registration for all races (except the first kids’ race) is sold out.

Free Quick Service Dining with purchase of non-discounted room and tickets. Book through February 12 for travel May 30 to August 24, 2017.

Kindermoon (which is a configuration of Fun & Sun) – requires room and ticket purchase, minimum 2 nights. Disney quotes starting price of $987 for 3 nights at an All Star and 2-day base tickets for a party of 2 adults and one 3-9 year old. Also includes a FastPass+ voucher for Disney Junior Live on Stage, and choice of voucher for Dumbo, Monsters Inc. Laugh Floor, or Mickey’s Philharmagic.

Booking dates for both packages:

4 Park Magic Ticket – one admission each to Magic Kingdom, Epcot, Animal Kingdom, Disney’s Hollywood Studios. Admissions must be used on separate days. No park hopping or doubling up on the parks visited. Price $279/adult $259/child. (A 4-day base ticket without restrictions is $325 for an adult.)

Book by March 5. Travel through May 26. Ticket expires 14 days from first use. Admission is blacked out April 10 -21.

Passholder Discount: Room-only discount available for stays April 23 to May 25 and April 9 to June 10. Book by June 9.

Watch the blog for our own Tessa Koten’s take on them soon after they open.