You know, it’s kind of nice that this week, April Fool’s fell on Easter. While there were some great jokes, it wasn’t over the top….which made my job finding you content much easier. (Though nothing will top my article from a few years back about how Olaf’s Frozen Escape was taking over Stitch’s Great Escape.) Did you have a favorite joke this year?

This week, learn about the new short before Incredibles 2, see an incredible Cast Compliment, and more.

We made it! We were featured in Business Insider….about the Purple Wall’s refurbishment….cool….

Speaking of making it, we were also featured in a Brit + Co. article this week!

This had me rolling this week. I laughed SO hard when I saw this. You all may be aware that Disney allows Guests to provide #CastCompliments on Twitter, right? Well, this Cast Compliment is GOAT. (Literally.)

It appears that Lemon Dole Whip will be a thing with Pixar Pier. Will you try it?

I love this. Kevin Smith recently went to Disneyland and knew that Cast Members couldn’t ask to get photos with him, so he asked them.

We have a first look at what to expect during the Millennium Falcon ride in Star Wars: Galaxy’s Edge. What do you think?

Only three percent of Hawaii residents speak the native language. At Disney’s Aulani resort, you’ll find that many Cast Members are fluent in it.

I learned so much from the article about the animator Glen Keane. This is a really fantastic article that if you love the Disney movies from the past 20-30 years, you’ll likely enjoy too.

Disney could acquire Sky News if that would assuage concerns. Things are getting interesting.

Looking to get ESPN+, the new subscription streaming network? Here’s what will be included in your package. Is this something you’d consider when it launches on April 12?

The short that will run in front of The Incredibles 2 looks adorable.

Is Universal Orlando working on their fourth gate? Rumors are swirling….

Things are going to be even stranger during this year’s Halloween Horror Nights. Does this new announcement make you excited and will you be attending HHN based on this announcement alone now?

What did we miss? Attach your ideas to this Mickey Mouse Bowl and Spoon Set and send it to blog@touringplans.com with the words “In Case You Missed It” in the subject line. 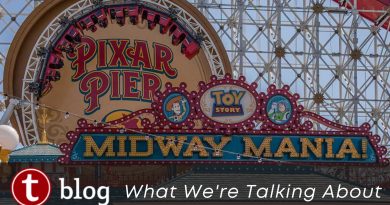 What We’re Talking About: Disneyland Not Reopening Yet, Is Goofy a Dog, Universal Orlando’s New Housing Project, and More