It’s time for another installment of the International Parks Wrap-up! October is about to kick off, and that means one thing – time for the thrills and (not-so-scary) chills of the Halloween season! While most of the parks don’t go in for the scary, there are still plenty of fall festivities to be experienced and enjoyed. Let’s begin our monthly rundown in Europe this time, with Disneyland Paris.

If you’re looking for some Halloween hijinks in Paris, look no further than “Disney’s Halloween Festival: A Spooky Mouse Skelebration.” From October 1 through November 4, you can enjoy the fall ambiance while strolling the spookily themed Main Street, USA. Don’t forget to be on the lookout for Mickey’s friends dressed in their Halloween best as you make your way throughout the park, but keep your eyes open for the villains lurking around!

The Halloween Cavalcade is not to be missed, in particular Mickey’s new float. Soak up the atmosphere as Disney characters parade around in their autumn best. Want to see some Disney villains up to their old tricks? Make sure you catch their show at the Castle Stage!

Last but not least, unlike what you’ll find in the U.S. parks, there is but one Halloween party in Disneyland Paris, and it is on October 31. The only confirmed info that I’ve been able to find is that it will be a whirlwind of monstrous exclusives! (Make of that what you will.)

I’m sorry to report that I’ve come up blank in regards to any Halloween celebrations or special events at Shanghai Disney Resort. In fact, I can’t find any new information from Disney in regards to the Shanghai park! One thing that I’ve noticed in regards to Shanghai is that their website does not appear to be updated frequently. Apologies, friends – hopefully next month will bring news of current happenings!

On the upside, Hong Kong Disneyland does not disappoint! They are currently in the swing of their “Halloween Time” celebrations, running from September 13 to October 31. This year, Mickey and friends (and Duffy and friends) are sporting all-new Halloween costumes, so don’t forget to get some snapshots with them. Additionally, you’ll want to make sure you go for a stroll through the Halloween Time Festival Gardens, where you can meet a host of other characters, such as Winnie the Pooh and friends (also dressed in Halloween attire!). And after dark you’ll find some of the villainous set creeping about, such as the Big Bad Wolf, Captain Hook, Queen of Hearts, and more.

During the day, you can’t miss Mickey’s Halloween Time Street Party, a parade of jack-o’-lantern whirlies featuring your favorite Disney friends, parade performers, and confetti that goes on for days! When the sun sets, be prepared to unleash your inner villain. Maleficent will appear and lead a crew of your favorite baddies in a procession along Main Street, USA, during which they’ll teach you how to be bad like them!

If I had to choose one international park to visit during the Halloween season, it would be undoubtedly be Tokyo Disney Resort! For 2018, Tokyo Disneyland’s special “Disney’s Halloween” event will be themed to a ghost version of Tokyo Disneyland. (How amazing is that?!) The event started on September 11 and will run through October 31, and it includes the “Spooky ‘Boo’ Parade.” As the parade winds its way through the park, the storyline progresses, and guests will enjoy a different scene depending upon where they watch from.

Over at DisneySea, you’ll find a Halloween celebration themed to the Disney villains. Even Mickey and friends join in the villainous fun by dressing in costumes inspired by the evil hosts of the party! (I mean, they’ve got to be respectful, right?) As expected, at both Tokyo parks you’ll also find a wide array of food and merchandise, themed specifically for the Halloween festivities.

Are you planning on visiting any of the international parks this Halloween season? Have you been in the past? Please comment and share your thoughts and experiences on the Disney Parks throughout the world!

Observations at the Magic Kingdom: October 1 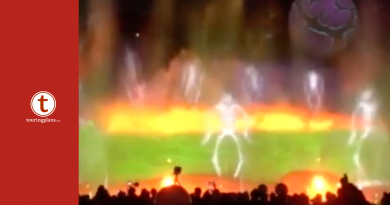