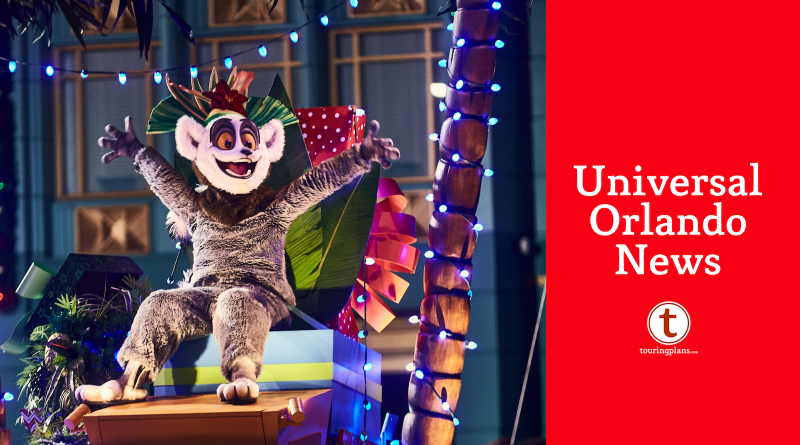 Christmas starts, we preview the new Endless Summer Resort, and tickets prices have increased in this week’s Universal Orlando News!

Universal shared the first photos of completed rooms at their new Endless Summer Resort – Surfside Inn and Suites. The resort opens summer 2019 with rooms starting at $73 and 2-bedroom suites at $111 per night, plus tax, for a 7-day stay. Reservations are now open.

Universal also is rolling out more food and beverage options, including Apple Strudel on a stick and a special Grinch Voodoo Donut. Mmmm, donuts.

Some of the sweets featured in this year’s Holiday line-up; such as the Grinch Doughnut and Apple Strudel on a stick! #HolidayLikeThis @UniversalORL pic.twitter.com/XO8UQAx7IZ

Fan favorites from last year return too, like Celestina Warbeck and the Banshees, the Blues Brothers, and the Frog Choir Christmas shows, plus the new Universal’s Holiday Parade Featuring Macy’s.

Universal has followed Disney’s lead and increased their Anytime ticket prices. Prices have increased $5 per day: one-day tickets increased to $129 from $124, a two-day park hopper ticket increased $10 to $275, and so forth. Value season ticket prices remain the same same. Single-day, one-park tickets are at Anytime pricing. Base tickets to Universal Studios Florida or Islands of Adventure are $129 per adult and $124 per child (plus tax).

Deck the halls at Universal Orlando Resort November 17, 2018 – January 6, 2019 with their annual Christmas festivities. Join the Grinch in Seuss Landing and see a live performance of How the Grinch Stole Christmas, celebrate in Universal Studios Florida with Universal’s Holiday Parade featuring Macy’s, or visit the Wizarding World decked out in Christmas decorations. Visit Universal Orlando online for more information.