The sunny, sticky, wet days of summer in Central Florida are definitely here! If you’ve been around Walt Disney World over the past week, you’ve seen the classic summertime pattern playing out. The norm was muggy mornings, which gave way to temperatures in the mid-90s by one or two PM, followed by some strong afternoon storms and a cloudy, slightly cooler evening.

Late in the week, some pretty big storms concentrated their efforts on the Walt Disney World area, starting early and clearing by five or so but leaving behind some wind damage, a few reports of small hail, and even a major lightning-caused house fire in a neighborhood north of Magic Kingdom.

By the end of the week, even the meteorologists at the National Weather Service were admitting that the forecast was getting repetitive. Influenced by a southerly Bermuda High, strong afternoon storms focused on Central Florida’s interior before moving west, leaving dry weather on the Atlantic beaches. Storm motion has been from the southeast to northwest, so the bulk of the rain has been falling on Florida’s west coast. As large, strong storms develop to the west, the residual cloudiness over Central Florida has been preventing redevelopment of rain after the first round moves through.

We lose that routine this coming week. With a southward shift of the Bermuda High, which has been feeding us that steady flow from the southeast, an approaching trough of low pressure from the west, and a tropical wave blowing through from the Bahamas, there is plenty of moisture coming our way. The shift will be in how the storms play out through the days.

What to Expect This Week

These factors will both raise rain chances for the entire region, including the Atlantic beaches, where it’s been very dry.

Look for a continued forecast of midday highs around 90-93, a heat index ranging from 100-105 in mid-afternoon, and a good chance of afternoon storms before clearing around sunset and a night in the mid 70s.

Early in the week, we’ll continue the pattern of southeast winds pushing storms northwest through our area in mid-afternoon. However, mid-week we’ll see the changes brought by our shifting Bermuda High, the approaching trough, and the tropical wave.

Rain chances will go up from Wednesday through late in the week. Winds will shift from the southeast to the southwest, and with that change, storms will begin pushing from west to east across the area. This can result in high rain coverage in the evenings for Central Florida, so we might see some lingering showers or storms well into the evening.  The tropical wave is expected to cross Florida Tuesday night into Wednesday, and will encourage some extra-heavy, tropical rainfall.

Rain chances start out around 50% early in the week to 60% Tuesday night, and up to 80% by Thursday.

Late in the week we should see the ridge of high pressure return and the southeast flow come back, flipping the rain back to the west coast-dominant pattern.

If you’re visiting Walt Disney World this week, be prepared for some tropical downpours and possibly strong storms with gusty winds, frequent lightning, and small hail.

The tropical wave moving through Florida this week is not expected to develop into a tropical cyclone. At this time, its chance of development through the next five days is at 20%. It will have pushed up the peninsula and move up the Georgia coastline by then. There are no other areas of tropical development in the north Atlantic, Gulf of Mexico, or Caribbean Sea this week.

With a lot of talk of the Bermuda High this week, let’s take a quick dive into just what this weather phenomenon is. The Bermuda High is a semi-permanent ridge of high pressure, which directly affects the entire east coast of the U.S. each summer. The Bermuda High’s presence can influence hurricane intensity and tracks, create heat waves, and encourage storm development over central Florida—all with a few shifts of its central location.

It lives over the Atlantic Ocean, typically near Bermuda during summer, with shifts in its center that could be closer to Florida, the mid Atlantic, or even the northeast region. In winter, this high retreats east and locates near the Azores, where its air influences the arid Sahara and Mediterranean region as it sinks around the center of the high. But on the west side of the clockwise flow, where southern winds bring warm air, the Bermuda High brings us the tropical, humid weather that the east coast often experiences in summer.

The Bermuda High can also cause dry weather over the Atlantic, which allows the water to warm quickly and boost hurricane formation, and it can influence how far south low pressure systems traversing the continent can reach. Tropical systems, moving west across the Atlantic, can be forced west and northwest by the blocking feature of the high’s center, and the clockwise motion of the high’s flow. That puts storms on a collision course for the east coast of the US — depending on the high’s location and size, it could send them into Florida or that distinctive hook that brings them northwest into the Carolinas.

Sometimes, it ends up in odd places. Last July, the Bermuda High centered itself near Tampa Bay. The result was a series of early morning thunderstorms, some severe—a reversal of the usual summertime pattern.

The Bermuda high’s flow can directly affect our daily weather by influencing the upper level winds which affect storm development. From droughts to hurricanes, this high pressure system dictates how the east coast of the U.S., and Florida in particular, spends its summer.

Got any questions about weather at Walt Disney World? Let us know in the comments. 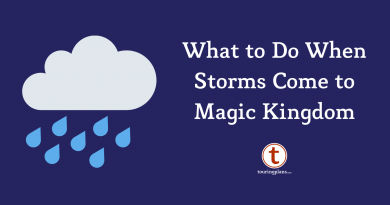 What to Do in the Magic Kingdom When it Storms