So, how do you feel about rain?

If you’re okay with a little splish-splash instead of sunblock, this was the week for you at Walt Disney World. With double trouble in the atmosphere from both a weak tropical system and a rare July trough, we had a few unusually rainy days, and even high temperatures as low as the seventies. Not great for pool days or the water parks, but it definitely made for some more comfortable park touring… unless you’re a big fan of 95 degrees, sunny, and humid.

A return to normal, although to be honest, normal isn’t much drier than what we just experienced. The trough that brought us all-day rain last week is still in the neighborhood, but some dry air has filtered in and made it a little harder for storms to develop over the weekend.

But early in the week, the Bermuda High’s western ridge will begin to build over Central Florida, and its position will saddle us with that southerly flow once again. With weak steering currents in place, we could be facing storms which settle in mid-afternoon and stick around for a while before drifting off to our north. These events always bring flooding rains, so it’s going to be a good week to pack two pairs of shoes.

Rain chances are going to be higher for the interior of Central Florida than the coastline all week, so look for an average forecast of 50% chance of afternoon storms, midday highs around 90 with a higher heat index, and temperatures in the mid/high 70s at night, depending on how much cooling rain falls in the evening.

After our little spin-up last week, which resulted in a short-lived tropical depression, it’s back to all quiet on the Atlantic, Gulf of Mexico, and

Edit: As of 2PM Sunday, 7/28/2019, the National Hurricane Center is now monitoring a cluster of storms in the eastern Caribbean Sea, which will affect Hispaniola and Puerto Rico as it moves northwestward. While there’s a very, very slight chance of development in the next five days as it passes over mountainous land, the storms could emerge into the Florida Straits by Friday with a better chance of organizing. We’ll know more about its chances of development later this week.

When will things get rolling in the tropics? There is already a steady stream of tropical waves crossing the Atlantic from Africa, but we are still a few weeks out from the August beginning of the Cape Verde season. This late-summer period, which is actually the Cape Verde Islands’ rainy season, is usually the time when we see several large, powerful hurricanes make their way all the way across the Atlantic. Storms like Hurricane Irma, which developed from a Cape Verde tropical wave on August 30, 2017, are able to build up to major hurricane status thanks to a long period of time to develop over the warm waters of the late-summer sea.

The Cape Verde season is responsible in part for August and September’s status as “peak” hurricane season, when we typically see the most tropical cyclones and when we have the most frequent strikes to the North American coastline.

When is the Hottest Season at Walt Disney World?

In a place where summer can feel like it sticks around from April to November, it can be hard to imagine there’s a single hottest season at Walt Disney World. But there is, and we’re in it—last week’s high of 78 notwithstanding.

When you go by averages, late July into August are the hottest months for Walt Disney World and Central Florida. And although it might feel counterintuitive, August is also the wettest month of the year. An average of more than seven and a half inches of rain falls in Orlando each August, and the normal high temperature is a sweaty 91 degrees.

So while it sounds crazy, but remember that in Florida’s monsoonal summers, hot sun + humidity + a sea breeze equals afternoon thunderstorms and all that rain.

The rare cloudy days are usually the ones that fool out-of-towners, because it looks like rain all day… but the clouds are actually preventing the development of storms. For example, one day last week we had clouds all day following the passage of that rainy trough of low pressure, but it didn’t rain, because there wasn’t enough heating of the atmosphere to cause storms.

Unfortunately, our climate prediction for this season continues to point towards higher-than-average temperatures, which means we can continue to anticipate highs in the mid-nineties on days when dry air gets into the mix, slowing storm development and letting that strong sun shine well into the afternoon. Will that happen? On some days, certainly. But all in all we’ve had a pretty good track record this summer for heavy storms, thanks in part of the positioning of the Bermuda High and a consistent southern flow of moist, tropical air.

September’s rainfall potential doesn’t change much from August and July, with afternoon thunderstorms continuing. However, the days will slowly be growing shorter and the sun angle will be shifting. A sunny afternoon in September still feels pretty close to the surface of the sun (perhaps more so if you’re visiting from a more temperate climate where sweater weather is already setting in) but the average high does drop a few degrees, closer to 88 degrees. In Florida, we call that “nice out.” Well, we do when it happens in August. In September, it just feels like an insult.

Until the first cold front of the season gathers the strength to come to Florida (usually in mid-October) the summer weather will probably feel pretty similar to visitors from out of state. So if you’re visiting Walt Disney World in the next three months, plan on hot days, thundery afternoons, and sultry summer nights.

When is your favorite season to visit Walt Disney World? Do you put up with the hot season, or are you more interested in the slightly cooler weather of winter? 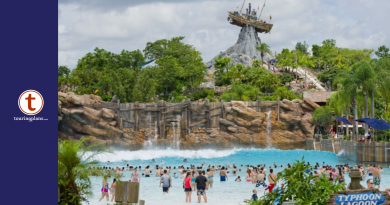 What to Expect: Weather by the Season at Orlando’s Water Parks