Welcome back! Walt Disney World is open, and that brings me back to the weather desk to keep an eye on the sky around Central Florida. Do you want a quick recap of what’s been going on while the parks have been closed?

Well, it’s been hot. March was hot. April was hot. In mid-May we had rain almost constantly, and then in June it stopped raining for two weeks and we all melted. There was a record high of 97 degrees at Orlando International Airport! Then the rain came back but it stayed hot. In short… things are pretty normal around here. If you’re visiting the theme parks this summer, be ready for heat, humidity, and strong, sometimes sudden thunderstorms with very heavy rainfall and the potential for extreme situations like flooding, hail, and even brief tornados.

You know, the usual. So what’s coming this week?

Central Florida’s rainy summer days are created by hot, humid air and the collisions of competing sea and lake breezes over the peninsula. Ask most Floridians what a “normal” summer day looks like, and you’ll probably get back “hot until about three o’clock, then a twenty-minute thunderstorm, then even more humid, somehow.”

And in case anyone forgets, it is summer in Florida. pic.twitter.com/aeEynENXS6

If that’s normal, there are degrees on either side which are affected by outside influences. Some larger weather features dial the rain back and the heat up, and some features increase the rainfall and storms… sometimes, by a lot.

This week, we are looking at both. For the first few days of the week, above-average heat is in control while storms will mostly gather to the south and east of Orlando. This is caused by a trough along the eastern seaboard of the U.S., which has dried out the airmass over Central Florida. Once it departs, we’ll have a day of “normal” weather: moisture-laden air, a midday collision of Atlantic and Gulf of Mexico sea breezes, and afternoon thunderstorms which pass through on their way to the coast.

The second half of the week, though, some weak upper-level disturbances will flit across the Florida peninsula, and the Atlantic ridge will begin to move north, changing our wind flow from west to east. As this happens, rain chances will go up… and up… and up!

For the remainder of Sunday, expect a heat index close to 104 degrees by mid-afternoon. Storm activity will probably concentrate on areas east of the theme parks, moving over the Atlantic coast by evening. That will leave a hot, sticky night for Orlando, with a low around 76.

On Monday, dry air will still be keeping rain chances down across Central Florida. There’s just a 20% chance we’ll see some early afternoon storms, although there might be some lightning visible to our south. Heat index values will peak around 101, and the muggy overnight low will be 76.

On Tuesday, our flow becomes more normal, although it will still be very hot with that west wind. Expect a high of 93 degrees. Afternoon sea breeze storms should pop up mid-afternoon to early evening, with a 50% chance of storms in the area.

Wednesday, a new stream of moisture arrives from the southeast. This steady flow of tropical air will keep rain chances as high as 70% through the weekend. We can expect some heavy rainfall and long-lasting storms to affect the interior of Central Florida during this period. Wednesday’s high will be around 94 degrees.

Thursday through Sunday, expect daily highs around 90 degrees, lows around 75 degrees, and a high expectation of storms each day from midday through evening. With this tropical air streaming in, prepare for soaking rains and the possibility of some wash-out afternoons. I’ll have forecast updates mid-week from @WeatheratWDW on Twitter.

While the Northeast just shook off Tropical Storm Fay, things have been quiet on the tropical front here in Florida. There are currently no weather systems being watched for tropical development in the Atlantic, Caribbean, or Gulf of Mexico.

That’s not unusual for July. The Atlantic’s busiest storm season typically doesn’t pick up steam until August. That’s when storms off the coast of Africa often gain strength as they cross the ocean, before threatening the Caribbean and eventually the east coast of the USA.

As meteorologists now expect a La Niña pattern to emerge off the Pacific coast of South America, it’s possible the 2020 late summer and fall hurricane season could ramp up to record-season strength. La Niña affects worldwide weather patterns, and weakens winds at high altitudes over the Atlantic, allowing warm pockets of air which can nurture strong storm development. The 2020 hurricane season is just getting started… watch this space! 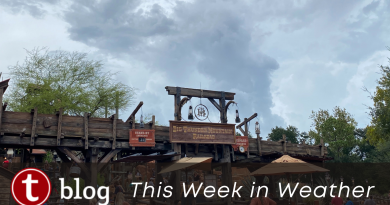