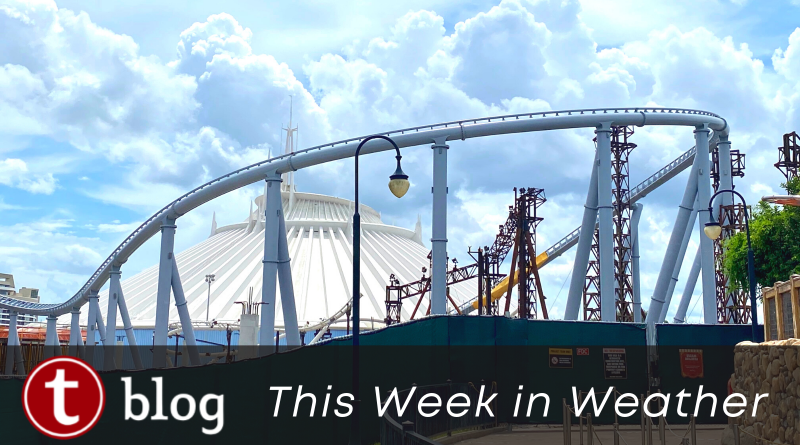 Waking up to rain on a Sunday in August: surprising! But that’s just what happened in Central Florida today as a westerly flow pushed heavy rain Saturday afternoon and overnight into the area. If you were at Walt Disney World on Saturday you saw some bursts of heavy rain and lightning around the parks. If you’re heading there this week, you can expect more of the same.

This week will begin quite wet, with a steady southwest flow bringing the area both heat and tropical moisture. The ridge axis keeping this flow in place will shift north Tuesday through Wednesday, nudging some big sea breeze collisions both days which will cause heavy rainfall over Central Florida’s interior. Then on Thursday, the Atlantic ridge will build nearby and lift north, creating a southeast flow that will help the west coast get in on the rain action.

Oh, and in the midst of all these storms? Above-average heat. Because Florida, I suppose.

For the rest of today: lots of extra moisture in the air and the low pressure just north of us means plenty of storms in the area. Look out for heavy rain and frequent lightning as these storms move west to east, eventually settling over the Atlantic beaches late in the evening. At least this gives us a slightly cooler overnight, with a low around 74 degrees.

The deep moisture and southwest flow sticks around for Monday, bringing us a 70% chance of thunderstorms. The best chance will be in the afternoon, but there’s a shot at early morning storms moving in from the Gulf as well, with clearing late morning to midday. It will stay steamy, with a high around 91 degrees and a heat index around 102. Storms should clear before midnight, with an overnight low of 76 degrees.

On Tuesday, above normal heat and rain chances continue. Look out for storms developing with the sea breeze collision occurring after noon, with a 60% chance of rain. The wind will shift from southwest to west, then drop off overnight. The high will be around 93, the low around 76.

Wednesday will be hot with a high around 94 degrees. Sea breeze collisions will fire off afternoon thunderstorms. There’s a 60% chance of seeing a storm or two. The overnight low will be around 76.

On Thursday the Atlantic ridge will begin to build, with its axis moving from Cape Canaveral on Thursday to near the Georgia line on Friday and Saturday. With this shift, the winds become southeasterly, then east-southeast by Friday. This will slowly bring rain chances down by the weekend.

Thursday through the weekend, look for about a 50% chance of rain, but with that southeast and then easterly flow, storms will favor the west coast as they first develop in the Orlando area but quickly push west. Highs will stay very hot, around 94 degrees, and lows will be around 76 degrees.

I was a little surprised when I opened this morning’s Tropical Weather Outlook and saw the red X over Florida. It turns out that all of this weekend rain is going to spin up into something tropical over the next few days—but it’s going to move into the Atlantic and out to sea.

Two tropical waves in the inter-tropical convergence zone are being watched for development, but they have fairly low chances over the next five days. One is far out in the Atlantic, near the Cape Verde Islands. The other is entering the Caribbean Sea and still moving westward. Their chances of development are placed at about 30%.

Why so low during the peak of hurricane season? One reason: a fresh layer of Saharan Dust is moving across the Atlantic and Caribbean this week. This inhibits storm development. We’ll have to wait and see what is left of these waves after the dust settles in a few days. 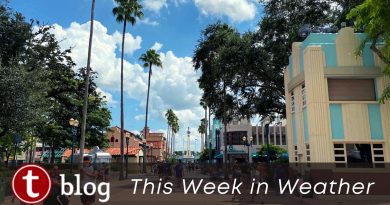