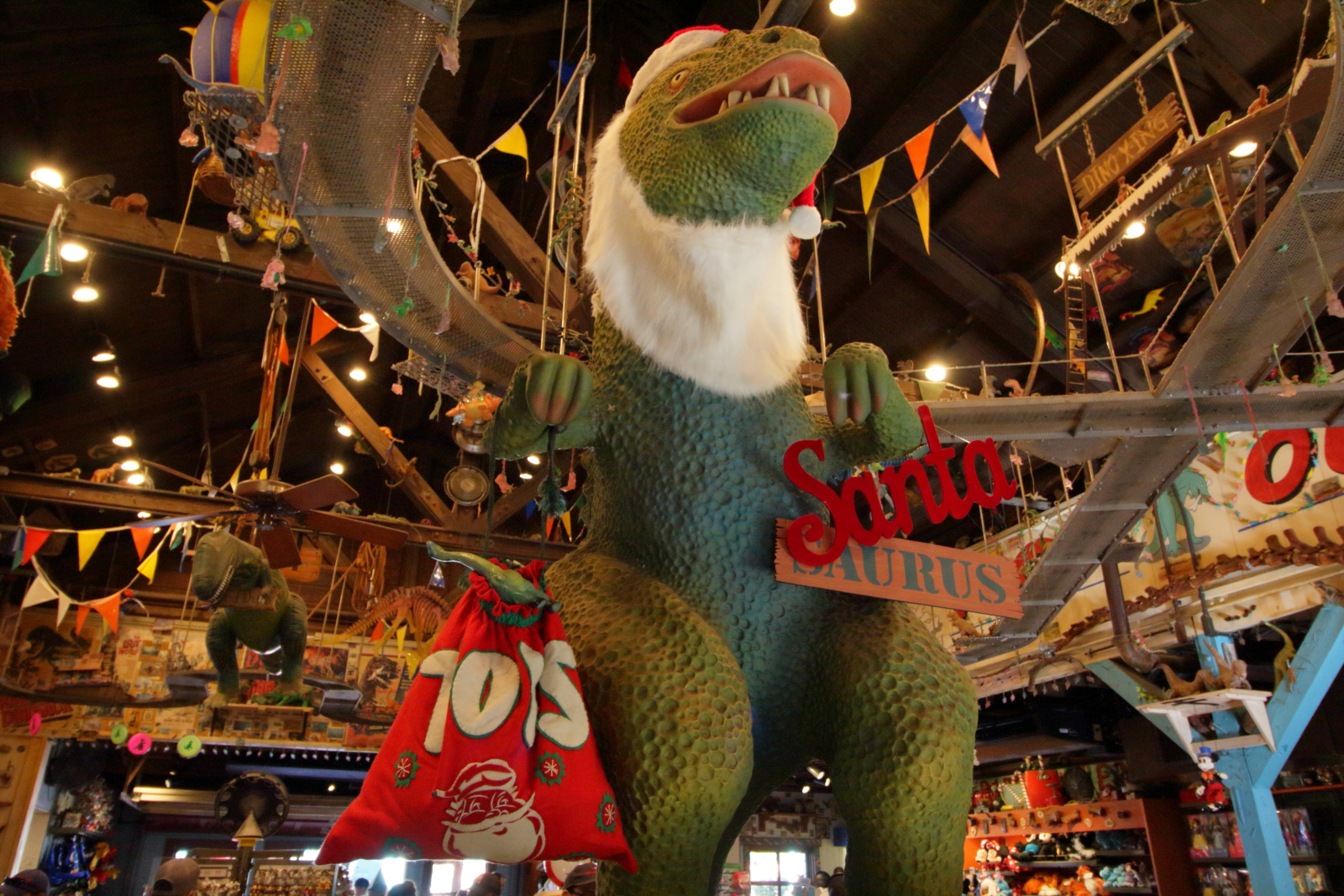 Hello, lovebugs! I had a great idea for this week, it was going to be “A Very Harambe Christmas”. I remembered seeing lots of fun Christmas shows and decorations at Animal Kingdom in the past. I was off to a good start, the Christmas tree looks gorgeous in front of the park: As I started looking for Christmas cheer in the park I found it a little lacking. There was some garland here and there, but gone are the days of the Jingle Jungle parade and themed trees at Camp Minnie-Mickey. So instead let’s visit a few of the animals and we’ll get back into the Christmas spirit a little later. First up, check out this giraffe lying down. I don’t normally catch them relaxing, but the weather was so nice I guess they couldn’t resist. What a treat! The giraffe wasn’t the only animal that couldn’t resist the delicious weather we’ve been having lately! Click below to see more animals and some extra Christmas fun around Walt Disney World.

Any safari is a success if you get to see a lion awake, right? While the male was completely passed out on another rock this beautiful female popped her head up just as our safari vehicle came by. I was so lucky to catch her without a single cloud in the sky. Over on the Gorilla Falls Exploration Trail, we found gorillas! Okay, that may seem obvious, but despite the trail name I’ve been through several times without seeing any of these beautiful animals. The cooler weather seemed to have everyone out and about. The male gorillas were especially active and looking all over their enclosure for food. Obviously, this handsome fella had already found something to munch on. So when I say Christmas decor is lacking at Animal Kingdom, I hope I didn’t set off any false alarms. Santa Saurus is still alive and well in DinoLand! Is it wrong that I actually look forward to seeing this each year? (No really, in a non-ironic way.) Maybe it’s the same damaged part of my brain that loves Heimlich’s Chew Chew Train. 😉 Leaving Animal Kingdom, I have to take a quick moment to brag on SeaWorld. We decided to grab annual passes since our silver Disney passes have quite a few blackout dates. It has been several years since we visited SeaWorld and I’ve been so impressed with the park! They have some of the best holiday entertainment in the Central Florida area. I mean, an ice skating show?? I’m excited to spend more time here in 2017, and take you along with me. 😀 Okay, back to the Disney bubble. We decided to visit The Contemporary just this past weekend to check out the gingerbread display. We had intentions of visiting all the resorts on the monorail loop and popping into the Magic Kingdom just to see the castle lit up. We arrived just a little after 4pm on Sunday evening. As you can see, the display hasn’t changed a lot since last year. Not to say it isn’t massive and amazing! I can’t help but wonder if they really cook all these same pieces year after year or if they’re preserved and stored somehow? But then our plans hit a snag. We waited for the monorail and waited and waited. Two monorails came through without a single person being allowed to board. Since it was a party night at the Magic Kingdom we could only enter the park before 7pm and we saw our time vanishing. We decided to visit the monorail loop resorts after the park and strolled over to see the castle at roughly 5:30pm. There we encountered even more issues. You’d never guess from the festive photo below that there was complete pandemonium behind us. The security lines to enter the park were 50 people deep and once we cleared that only a handful for turnstyles were open to non-party guests. Fighting our way to those turnstyles was a chore and we arrived to find party guests yelling at cast members because they felt they should be allowed into the shorter non-party guest line. In short, getting into the park was just a logistical nightmare. I feel bad for all the guests that paid for expensive party tickets and had to fight through the same mess we did. It sure looks pretty, though! Once inside the park it was shoulder to shoulder crowded. We decided to camp out in the hub gardens and wait for the castle to light up. We grabbed a snack from Casey’s Corner and enjoyed the chilly night air. After the castle lighting I fought my way up to the very front for the below photo. It was worth it! But somewhere between that and escaping the park after we gave up on seeing the other resorts. Maybe in the next couple of weeks we’ll make it back? I hope so! However, on the previous evening we had one of the best nights I can remember at Epcot! Of course, how could it be a bad night when it starts with Stitch tangled in lights? I only had one goal in mind upon entering the park, survive until Illuminations. We didn’t have a single fastpass and no plan at all for our time, so we just wandered along. Okay, I know it’s only me and like seven other people still playing Pokemon Go. But right under Spaceship Earth I caught a Magikarp that ended up being a Ditto! I named him Epcot. Apologies to anyone that felt that’s gibberish. But if you’re playing leave me a comment below, I just love this silly game! The Goofy topiary is back on the walkway to the World Showcase. The night I visited there weren’t too many people waiting in line for photos. It’s funny how all the festivals are sort of merging together at Epcot. The food booths stay out half the year and several of the topiaries are on display all the time. Maybe they can just have one big festival with everything. 😉 Something original are these reindeer Pluto ears. I saw someone wearing them before I spotted them on the shelf and thought maybe they were handmade. They even have little bells around the outside that jingle as you walk. You can order them on the Disney Parks Shopping App and have them in time for Christmas, if you’re in the market! Also in shopping news, I spotted baby Baymax this week! I’ve always thought the baby plush are a little creepy looking, but not Baymax! He’s so, so cute. It was fun to stand by the cart and watch people discover him for the first time. People were freaking out, it was adorable! Without any destination in mind we decided to try our luck at the Holidays Around the World food booths. We were expecting crowds like Food and Wine Festival but that wasn’t at all the case. We walked up to absolutely no line at all. We tried the Three King’s Bread and it tasted just like King Cake from Mardi Gras. We’d get this again for sure! Since we had such good luck here we decided to walk the World Showcase in search of more yummy adventures. I included the below photo because I’ve been seeing so many bunnies at Disney lately! I guess that’s completely random, but where else can you get a bunny update? I can’t remember the last time I visited a park without seeing one and they seem to be getting much closer than before. Maybe bunnies are the new squirrels! Over in England the big teapot is back in the planter. I always look for this and the Holiday Storyteller for the area, Father Christmas. I think he’s my very favorite one! I missed him during this visit, but will be sure to see him before the season ends. Do you have a favorite storyteller? Let me know in the comments below. Over in France huge ornaments have been placed in planters again this year. Inside are scenes from around the country. I love miniature scenes like these. I can’t imagine where they keep all of these things during the rest of the year! Can you imagine how much space it all takes up? Maybe it’s just me, but I don’t remember these topiaries from last year. I think they’re really cute and festive. Lately I think Epcot is the most dressed up for the holidays of all the Disney parks. I think that has a lot to do with the food booths staying out through December. That makes it a little easier to accept an extra few months of Food and Wine. I also love the merchandise designs for Holidays Around The World. Check out this t-shirt! I’m trying to decide if I need it now or if I’ll try my luck waiting for it to come to the outlets. Maybe I should consult Derek for his professional opinion? Over in the America pavilion Santa’s Village looks amazing. The night we were there Santa and Mr. Claus were even strolling around greeting guests without a line. Unfortunately. due to the low attendance all the food booths closed long before the park did that night. I was really hoping to try the Roasted Turkey with Stuffing, Mashed Potatoes, and Cranberry Sauce but we just missed it. Luckily I was able to score the Cheese Fondue in a Bread Bowl served with Steamed Vegetables. Holy Moly, this was to die for and totally enough food to make it a meal. It got a little awkward towards the end when the actual bowl had to be broken up, but it was totally worth it! Don’t miss this one if you’re visiting before the festival ends. After a hearty meal we found a spot to camp out and watch Illuminations. The holiday tag at the end was even better than I remembered. We’re definitely going to be spending more time at Epcot this holiday season! And that’s it for me this year. Thanks for reading! Please let me know in the comments below what you’d like to see next time around. Until then – I hope you’re having the best week ever.