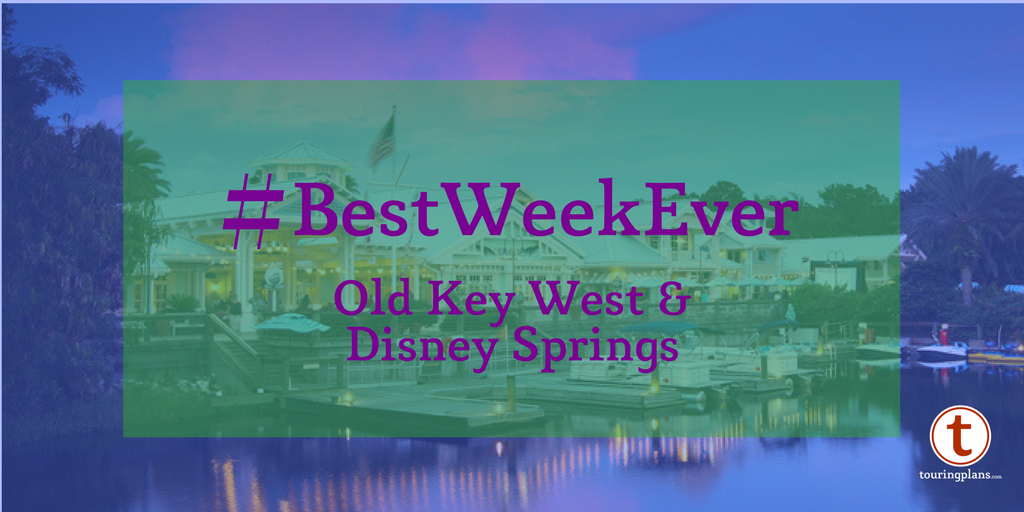 Hello, friends! Thanks for joining us for another Best Week Ever. This week is not one to read if you’re feeling hungry, because we’re visiting Olivia’s Cafe for a scrumptious breakfast. After that we’re checking out Christmas in July at Disney Springs and maybe even showing off some new Dooney & Bourke patterns. Let’s get going!

When we were hunting restaurants to feature I realized that I hadn’t visited Olivia’s at Disney’s Old Key West Resort in several years. I had very fond memories of this dining spot, so I had high expectations. I was surprised how crowded the resort was at 9am. We would have had a very tough time finding a parking spot an hour later. We were scrambling a bit to make our reservation, but arrived just in time. At the podium we were seated quickly and found the dining room to be quiet. However, there were several people waiting. It seems like this is a spot you can get into without a reservation, but it’s much faster if you book online. There are several dining rooms and we were seated in a smaller one pictured below. All those frames contain guest photos, mostly from the 90s. I immediately felt at home and settled in for our meal. Don’t you want to see our fancy breakfast? Click below to read more from our adventure this week! 🙂

We started off with a couple of mimosas to kick breakfast off right. I will say, I don’t think this is a spot to choose if you’re in a hurry. The entire resort reminds me a little of Castaway Cay with a laid back island feel. That’s a nice way of saying nobody was rushing so our breakfast took a little over an hour. Of course, that was fine with us! 🙂 They also offered to sell us additional mimosas in to-go cups at the end of our meal which I thought was hilarious. (Don’t worry, Mom. We politely declined.) The upside of our meal taking a little longer was that it was truly fantastic! No powdered eggs here. Everything was cooked perfectly and tasted great. My hubby ordered the waffles and eggs, but was surprised (and delighted) to see it was Mickey waffles. They also came with either strawberry or blueberry sauce that looked like it was homemade and not out of a jar. Overall he was over the moon! I wasn’t feeling too adventurous, so I just ordered the Olivia’s Breakfast that includes the breakfast basics. The potatoes were SO GOOD! I immediately regretted not trying one of the more specialty menu items. Would you like to see the Crab Cake Eggs Benedict or Sweet Potato Hash when I head back? Let me know in the comments. I don’t want to include breakfast in this precious space if everyone is ready to get back to the parks! 🙂 Even better, Olivia’s honored our passholder discount. I totally loved this place and will be heading back very soon. Pictured below, they also have a cute outdoor seating area. While the weather was far too sticky for us to try it this time, it might be a nice option if you’re visiting during a cooler time of year. Of course, we had to exit through the gift shop and noticed an oddly placed Christmas display. We asked one of the shop attendants and found out that lots of spots on Disney property were celebrating Christmas in July. I only mention it because it inspired the second half of our adventure this week. We read up a bit on Christmas in July and decided to head over to Disney Springs. It took me a while, but I’m buying into the new look and feel of this area and finally not calling it “Downtown Disney” anymore. What do you think? Have you embraced the new name yet? I’ll give Disney credit, they advertised the Christmas in July theme very well. I don’t think anyone could miss it! Large signs were placed throughout with information about entertainment, food options, and Christmas merchandise. If you know me at all, you know I checked out merchandise first! Throughout the shops there were cute boxes with gift tags as displays. I normally don’t buy into this stuff, but it made me want to get a jump on my Christmas shopping for this year. Maybe I just haven’t forgotten the stress of shopping last Christmas! 😉 It was a little funny to see all the Christmas merchandise that Disney really has just waiting to be put back on the shelf. Christmas Tea and Winter Spice was ready for display right next to the Beauty and the Beast Tea! This isn’t a holiday find, but check out this cool Maleficent teapot! I immediately grabbed one to bring home and was shocked at the price. This comes packaged with a couple of dinky, little, generic teacups in a set for $115!! Needless to say I put it back on the shelf. Here’s hoping it ends up at the outlets with a slightly less insane price tag. Next we checked in on the new Dooney & Bourke patterns that were released for Christmas in July. Though these were not part of that, I wanted to show these Nightmare Before Christmas patterns as they were new to me and there are so many NBC fans out there. Personally, I’m a little over the Dooney craze because there are too many patterns to keep up with, but I do like the Jack design. Below is the new Haunted Mansion pattern that was just released. I really don’t care for the bright green accents or the purple color of these bags. I wonder how they will do compared to the original Haunted Mansion design. What do you think of these new ones? Lastly, there were new The Princess and the Frog bags that were absolutely to die for! Each bag has the exact same pattern and placement. The below bag looked like a work of art placed onto a gorgeous, high-end handbag. If I didn’t already have so many purses this one would have been added to my collection! The other The Princess and the Frog bags also have been adjusted so the pattern matches exactly on each purse, though I don’t like the smaller print as much. In any case, hopefully this will cut down on eBay sharks reselling bags. It was pretty hilarious to see the different levels of participation from shop to shop on the Christmas in July theme. I suppose the Disney TAG Boutique tried… In the Christmas Shop, I found this new to me Nightmare Before Christmas nutcracker. For so long I never found anything NBC in the parks. I love seeing a little more merchandise sneak in. Maybe it means  we could get the Haunted Mansion Holiday someday?? Check out these fresh-made treats that were in the case for Christmas in July. People were getting such a kick out of this theme, the lines were twice as long as I would normally expect. At Amorette’s Patisserie the line was out the door! I couldn’t even get a glimpse of the treats in there! Seems like this promotion was quite successful. One place that had no line at all was AristoCrepes. I couldn’t force myself to try this bizarre combination, though. Does anyone think this sounds appealing? I’ve never tried anything good here. I wish they’d overhaul the menu. 🙁 The Ganachery Chocolate Shoppe was celebrating too. I just stopped in for photos, but left with a box of chocolates. I’ve never tried anything in here that wasn’t fantastic! It’s pricey, but worth a splurge when you’re visiting. I also noticed that the empty spot left by Sound Lion finally has a name on the door. It looks like Savannah Bee Company will be upgrading from their outdoor kiosk to this space. I hope it works out for them! I haven’t purchased any honey from them yet, but will have to give it a try. Wine Bar George is progressing at a snail’s pace, but appears to be on track to open in Fall of this year. I’m just ready for all the construction to be done! Not much appeared to be happening behind the construction walls of Portobello Country Italian Trattoria. It looks like it might be opening with its new name (Terralina Crafted Italian) in September! Lastly, here’s a look at the decorations that were put out to celebrate Christmas in July. While it seemed to bring the crowds out, the theme was limited. Maybe I feel that way because we didn’t make time to meet Santa Claus? 🙂 In any case, I’m glad we went to check it out and share it with you. That’s it for this time. Thanks for joining me for another week of fun! Please let me know if you have requests next time around. Until then – I hope you’re having the best week ever.