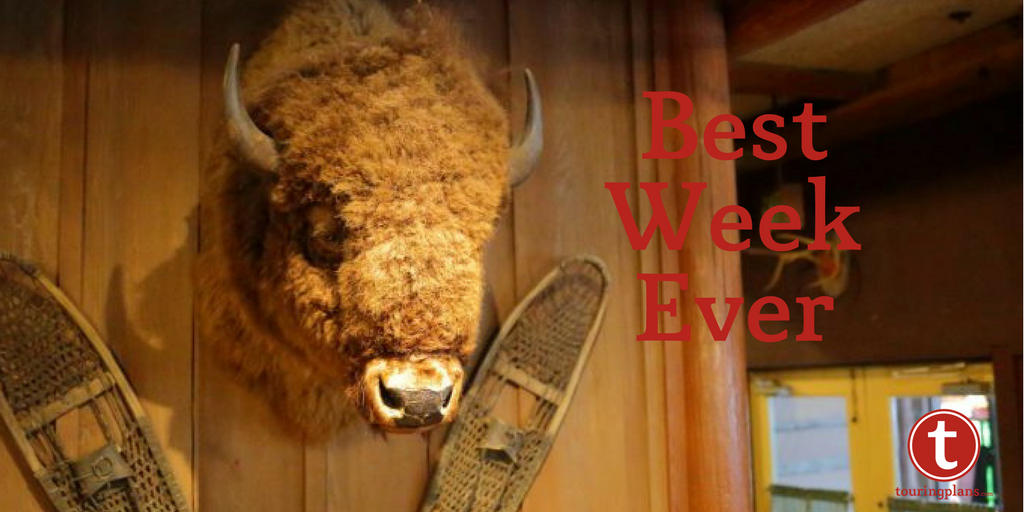 Hello, friends! You might not have expected to see me for two weeks in a row. Dani has sailed away on a fabulous cruise, so I’m lucky enough to be filling in. I was trying to decide where to take you this week and wanted it to be somewhere special. Where have we not visited in a while on Best Week Ever? After some thought I decided on…. Wait! It isn’t what you think! Click to read more! 🙂

After pulling through the Magic Kingdom gates we took a turn toward the Fort Wilderness Campgrounds. This is a beautiful spot to visit during your time at Walt Disney World. However, keep in mind that they’ve been very difficult about letting you park a car here lately. To assure your spot I recommend having a dining reservation. You can also easily catch a boat from the Magic Kingdom to check it out. After parking you must take a bus back to the campgrounds. (Boats from the Magic Kingdom go directly to the campgrounds without taking a bus). I’ve written before about my love for this unique part of Walt Disney World, but I realized I haven’t featured the Trail’s End Restaurant found here. Beginning at 4:30pm daily this eatery becomes one heck of a buffet! Below is the view from the porch you can enjoy while you wait to be called in for supper. I admit, part of my love for this area comes from the fact that nothing has changed. It’s one small pocket of Disney World that’s exactly how I remember it. As we were seated our server pointed out the buffalo head mounted to the wall that’s been in the same spot for 45 years. The buffet itself is too large to show everything, but let’s cover dessert first! Everything you see here is included but not pictured is strawberry shortcake, ice cream, cobbler, bread pudding, and more. The cost for everything including drink is $28 for adults and $16 for children (Or one table service credit on the meal plan). I’m partial, but I think it’s totally worth it. Just looking at the photos I already want to go back! Here are a few of the sides including corn, veggies, macaroni & cheese, mashed potatoes, and cornbread. I didn’t include photos of all the meat options but you’ll find fried chicken, ribs, salmon, and a specialty meat on the cutting board. The night we visited it was brisket! This is such a hearty meal, but be sure to allow yourself extra time to get all the way out the campgrounds. It can take a little time, but you can see it’s worth the trip! 🙂 Before we move on I thought it was only fair to include a photo of my plate. I’m not one to eat huge meals, but I can’t resist loading up when visiting Trail’s End. Of course, I am guilty of putting the veggies in front and letting the rest of the plate fade away into artistic photo techniques. 😉 Back outside we had a little time to take in the sights while waiting for our next activity. Nightly, the campgrounds offer a wagon ride around the resort at 6pm and 8:30pm. The cost is $8 (payable with cash or your Key to the World Card) and the ride lasts for roughly 25 minutes. The rides are also on a first come, first served basis. I mention it because for the first time we had a completely full wagon! I’d never seen that happen before and I was glad we arrived 20 minutes early to wait.

Before we knew it two beautiful horses arrived pulling an already full wagon. Apparently, a group had reserved a private wagon ride before the first public offering of the day. I didn’t know that was an option, but apparently the cost is $300 for 30-35 guests. Seems like a decent value if anyone is traveling with extended family or large groups of friends. During our wagon ride we were lucky enough to see quite a bit of local wildlife. Can you spot two deer in the photo below? Aside from the animals we were treated to quiet views of nature. It’s hard to remember that you’re just a quick boat ride away from the Magic Kingdom with views like these. I can understand why people stay at the Campgrounds! After our wagon ride the sun was just starting to set and we had to decide between Chip ’n Dale’s Campfire Sing-A-Long and visiting the Magic Kingdom. On a normal night I think we would have spent the night with Chip and Dale, but since I knew I’d be writing Best Week Ever I decided to head over to Magic Kingdom. Since the park was only open for another few hours we hopped a boat from the campgrounds directly over to the Magic Kingdom. Check out the sunset over the lagoon! It was such a pretty night. Arriving at the Magic Kingdom, it was crowded. It was so, so crowded. Earlier in the day I had grabbed a couple of FastPass+ and I was thankful I did. I doubt we would have ridden anything if I hadn’t planned ahead on a whim. Check out this view down Main Street! I don’t know how, but the crowds parted to make room for the Move It! Shake It! Dance & Play It! Street Party. We didn’t have anywhere to run off to so we watched for a bit. After the parade we dashed over to the Tomorrowland Transit Authority Peoplemover. The line was quite long, but there wasn’t a cast member at the end of the line holding a sign. If someone needs to identify the end of the line that’s normally a breaking point for us meaning that the park is just too busy for us to visit. Luckily, in just about 10 minutes we were looking at Progress City! If you ride Tomorrowland Transit Authority Peoplemover and don’t post a photo of the castle, did you really ride at all? Despite the crowds it was a beautiful night at the Magic Kingdom and we were so lucky to be there.

Now, I was going to post about how the Joffrey’s Revive coffee kiosk looked like it was ready to open any day. But as I’m writing this I see it opened today! (3/7/2014) So here’s rare look at it just days before it opened! 😉 I also noticed Space Mountain has new LED lighting. I was jealous of the lighting that Disneyland has on their Space Mountain so it’s great to see that we finally have a little bit of our own! I wonder if this means we’ll get cool lighting effects during the Mickey’s Not So Scary Halloween Party? It was finally time to cash in our first FastPass+ for Monsters, Inc. Laugh Floor. The wait time was a whopping 40 minutes so I was glad we’d planned ahead. With the FastPass+ we walked right in. This isn’t a show we do often because it can get a bit repetitive, but the cast was amazing during this show. We had a blast! With the park being so busy we did a little shopping after. My favorite find was this cute coffee mug. It has Tokyo Disney levels of cuteness! 🙂 After shopping our way through the park I was struck with a need to see the Country Bear Jamboree. The theater was almost completely full, but we grabbed a seat right in front of Big Al. How can you not love this guy?? As we emerged from the Jamboree, Wishes was just taking over the sky. It still doesn’t seem real to me that Wishes is ending in just a couple of months. Are you excited about the new nighttime show? I’m a little nervous that the viewing area will be quite limited, but only time will tell. After Wishes we had one last FastPass+ for Pirates of the Caribbean. Again, the wait was 45 minutes so I was glad we were able to whisk to the front of the line. This ride is always a classic but I keep secretly hoping that I’ll get stuck on the ride someday. Now that I’ve walked all the Peoplemover this is my next “wish list” to be evacuated from. Am I the only one that hopes for things like that? I feel like it’s a weird things to want! Since the crowds weren’t dying down at all we decided to call it a night. On the way out of the park I spotted Pikachu! I love playing Pokemon Go at the parks so it’s fun to spot a fellow fan.

And that’s it for this time. Thanks for joining me for this special evening of fun! Please let me know in the comments below what you’d like to see next time around. Until then – I hope you’re having the best week ever.