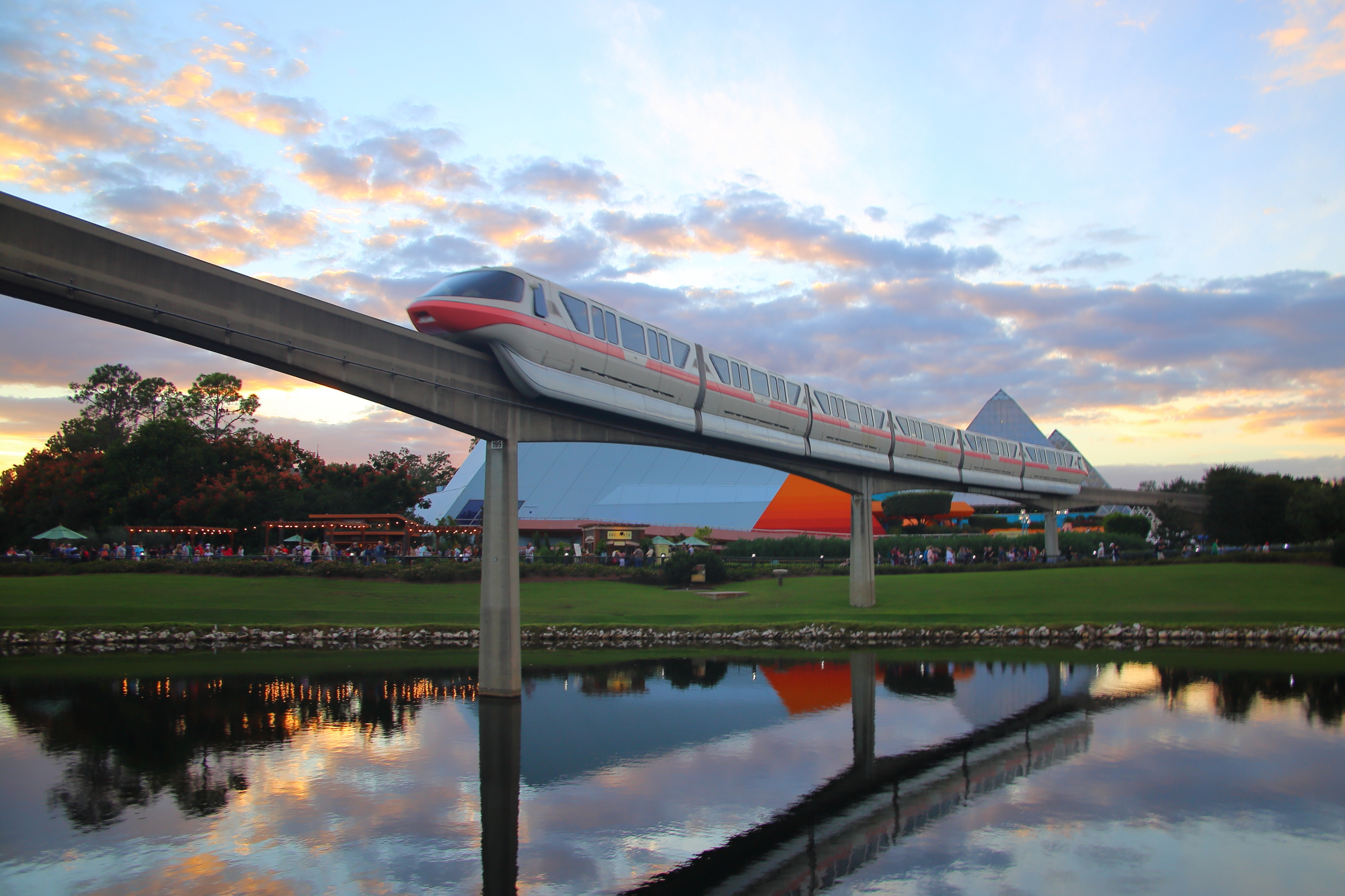 Hello Friends! First, let me start by wishing the very happiest Thanksgiving to those that celebrate. Personally, I’ll be enjoying more than my fair share of turkey, stuffing, and pumpkin pie today! Due to the crowds I’ll be steering clear of the parks this holiday weekend. But that didn’t stop me from getting some amazing shots to share with you over the last few weeks. For starters, check out this glorious sunset at Epcot! The decorations haven’t changed much at Epcot this year. But, it’s always exciting to see the seasons change and all those lovely poinsettias hit the flower beds. It was quite chilly this past weekend with lows dipping down into the 40s, but during the day it was too hot for a coat. Good ol’ Florida, it never dissappoints with that sunshine to warm everything up! On the reverse side of the entry planter Stitch is back too. I haven’t been by after dark yet, but I’m guessing the lights he’s tangled in will illuminate in the evenings. At least that’s been the case in previous years. I love these characters, but it would be nice to see someone new added. Which new character would you like to see? Let me know in the comments below. Over at Living with the Land the sandman has returned! I’m so glad they brought him back this year. And I was right! The fall display that I mentioned last time was still on the ride. So Living with the Land might be the only place on Disney property that didn’t skip right over Thanksgiving and move on the Christmas! 😀  (And for any Pokemon Go players, this sandman is a PokeStop) Epcot’s Christmas tree is up at the International Gateway and looking gorgeous. I framed the photo this way so if you’ve never been able to visit around the holidays you’d have a reference for just how massive the tree is. Disney certainly corners the market in enormous and beautiful Christmas trees. Each tree has a park specific theme too. Of course, Epcot’s tree celebrates the countries around the World Showcase. I’m going to add in just one more monorail shot before we head to the Magic Kingdom. I was having trouble picking between the two, so I decided you guys wouldn’t mind both. I can’t decide which one is my favorite. The other has that killer sunset, but I really like the framing on this one. Which one do you like? Hmm… it looks like we have a theme here. It seems I was pretty focused on modes of transportation! This one is a little more old fashioned than a monorail. And depending on the season it likely smells better! (I think I just made a joke!! Derek will be so proud!) One of my favorite things to do at Magic Kingdom park opening is to watch the Main Street Vehicles as they appear. It’s always fun to see the faces on first time guests when they see a massive horse appear on Main Street. Another fun early morning activity is shopping all alone in perfectly organized stores. You might never believe it if you’ve only seen the Emporium at the end of the day, but it starts off neat and orderly. I have so much respect for the cast members than clean up these store each night. It must look like a bomb has gone off! Dani did such a great job last week covering Christmas at the Magic Kingdom, but I had to at least include one photo of the castle! (Did you really visit the Magic Kingdom if you don’t post a castle photo??) I haven’t made it yet this year to see the Castle Lighting. It’s the last thing on my holiday “to do” list. I think I saved the best for last. Though, the drone show at Disney Springs is really impressive. I purposely didn’t include photos or video of the show because they just don’t do it justice. If you’re visiting while the drone show is taking place it’s certainly worth your time. I’m excited to see how they will apply this technology to future entertainment. (I’m looking at you, Pandora) During my most recent visit, The Many Adventures of Winnie the Pooh broke down while we were riding. I suppose most people would have been upset about the delay, but I was thrilled. Check out the really neat angle I was able to get on the below photo because our ride vehicle was stopped. Have you ever been stuck on a ride for a while? I’d love to hear your best story in the comments below! We even had to walk off Splash Mountain once. It was awesome! 😉 I spotted these new plush in the gift shop. They’re so cute! They’re built like a T-rex with a big head and tiny arms. I think the piglet is my favorite of the three. These dolls beg the question, have you see the movie Meet the Robinsons? Because if so I’m pretty sure this is all you can think about right now. On my way out of the park I spotted Judy Hopps from Zootopia for the very first time! I’m surprised there still isn’t a place to meet these characters at Walt Disney World. I guess maybe they are just still too popular? At least we can finally meet Olaf at Disney’s Hollywood Studios! Speaking of Disney’s Hollywood Studios, I stopped by last week and honestly had a blast. I’ve been joking with everyone else that there’s nothing to do here, but we had so much fun and easily stayed busy for a full day. It was my favorite park day in recent memory, so I’m glad I get to share it with you. To get us started, here’s the awesome Christmas tree that marks the front of this park. I love the retro design! Just as we entered the park we noticed a huge group gathered and obviously waiting for something. There were no spots left for front row viewing, but we were curious what was happening so we joined the pack. Moments later Captain Phasma led the March of the First Order. Wow, this was neat! I was never a big Star Wars fan, but seeing it in the parks I can’t help but get interested. So interested that we decided to book at Star Wars Day at Sea Cruise! So I’ll have lots more to share with you in a few months. 😀 Of course, the reason we’d chosen to visit the park was to check out PizzeRizzo. I’m a huge Muppets fan, so I was dying to see the inside of the restaurant. After checking the park schedule we realized it was almost time for the next Dr. Strange meet and greet so we changed course. Along the way I spotted the new holiday balloon for this year. I also popped into a few shops along the way and spotted merchandise for Moana. I’m not too excited for this movie, but I remember saying the same thing about Inside Out and even Frozen. Of course, I’m obsessed with them now! Are you planning to see Moana this Thanksgiving weekend? If your reading this late, what did you think of the movie? Walking through Pizar Place I caught a green army man “hiding”. He had a whole group of kids cracking up as he tried different hiding spots, but this was the best one. The army men are a great addition to this area. Everyone seems to be having more fun now that there are three tracks at Toy Story Midway Mania and the lines are more manageable. Finally, it was time for Dr. Strange! He was, well, handsome. Otherwise it was pretty much a non-event. He chose children from the audience and stayed focused on them. We didn’t even stay until the end as it was a little awkward. That said, I’m excited to see anything new added to the park and it seems nice for the kids to have an experience with a character rather than just snapping a photo. So finally it was time to make our way to PizzeRizzo! Along the way I visited the Muppets planter. As you can see it doesn’t look half bad. I’d like to think Rizzo is still hiding in one of those bushes. 😉 But we all know Rizzo isn’t hiding in a bush, he’s running his own pizza joint just down the road! By now I’m sure most of you have seen tons of photos so I won’t add a bunch here. What I will say, is it seems the renovation was either done on a shoestring budget or with minimal commitment to the theme. From the looks of it, they could remove all reference to The Muppets in a weekend. Hopefully more will be added in the future? Only time will tell. The food was… not awful. Actually we liked the pizza. A quick tip, if you don’t want the side salad you can save $2 by asking to not have it included with your meal. That brings the pizza cost down to $7.99, which is pretty decent for an edible and hearty meal at Disney. Of course, I won’t be rushing back but I wouldn’t avoid this spot for a quick meal. As the sun sets, you can see where they blew the budget in this renovation. What a great sign! If you pay close attention you can even catch it flashing this Easter Egg instead of saying “The City’s Top Rated Pizza”. I really hope they sell some t-shirts and other swag for this new dining spot! Since we were in the park at night we decided to check out Jingle Bell, Jingle BAM. We’d heard mixed reviews so we didn’t camp out very long for a spot. About 10 minutes before showtime we grabbed a spot on the planter railing in front of the Chinese Theater. The view was obstructed, but fine for us. I agree that the pacing is off on this show, but I loved seeing The Nightmare Before Christmas included! Still, I don’t know that we’ll watch it again. Here’s one last photo of all the glittering decorations at Disney’s Hollywood Studios. I love seeing all the parks decked out for the holiday! And that’s everything for this week. Thanks for reading! Please let me know in the comments below what you’d like to see next time around. I’m thinking maybe a look at Christmas around the Disney Resorts? I’ll be back on December 15th to share more fun. Until then – I hope you’re having the best week ever and GOOD LUCK with that Black Friday shopping! May the odds be ever in your favor. 😀