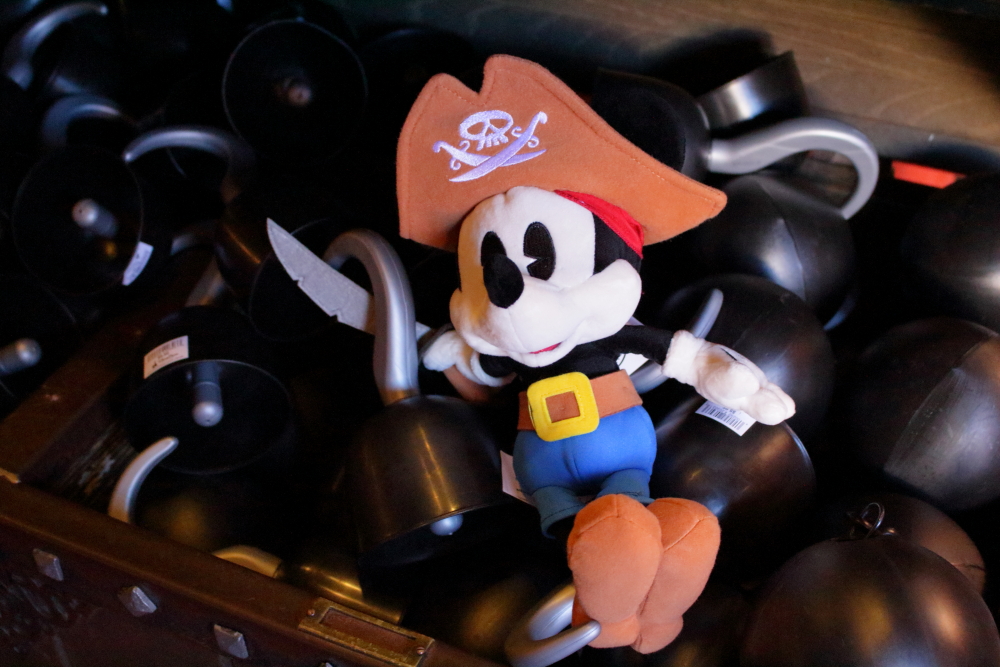 Hello, Lovebugs! You know when I say everything, I mean EVERYHING! To start this week we even drove out to Port Canaveral to watch the cruise ships sail away. Of course, I mean one cruise ship in particular! The Disney Fantasy looked amazing and I loved hearing the horn even if I wasn’t sailing. This front row spot was in Jetty Park. To visit is a $15 fee, but very worth it to watch the ships sail away. I’d do this again in a heartbeat! Of course, I’m hoping to actually sail sooner rather than later. More on that in a future post! 😉 (I wouldn’t go without sharing with you!) All right, getting back to beautiful Orlando I tried a “new to me” restaurant that I wanted to tell you about. If you can believe it, I’d never been to The Wave at Disney’s Contemporary Resort before! After trying it I’m kicking myself for waiting so long! I booked a very early reservation as an excuse to get to the Magic Kingdom. As you can see from the photo below, it wasn’t a very popular idea. We had the place to ourselves and the service was impeccable. The buffet at The Wave was massive! I couldn’t justify the $24 price tag, but if you’re on the dining plan this would be an excellent value for you. They had a huge spread of hot and cold items. After my breakfast came to the table I wished I had just gone for the buffet instead. So here’s my plate. I ordered the Florida Rock Shrimp Omelet for $15. It wasn’t something I would order again, but maybe I’m just saying that because I had buffet envy! The potatoes were very good and the biscuit came with three different butter options. Overall, it was a pricey breakfast but that is to be expected at Disney. I’d hit the buffet or plan to skip this one. But you can’t argue with results! An early dining reservation (with a penalty to no show) guaranteed that I showed up for the 8am opening at Magic Kingdom. For some reason 8am openings at this park are always a little bit empty. There isn’t any other time that I see so little foot traffic. Of course, being me I spent the early start running around taking photos! I took advantage of the bright, blue skies and ran over to Rapunzel’s tower. I never get tired of the classics. What a lovely view in the Magic Kingdom! What is one of your favorite photo spots? After meandering a bit we finally rode It’s a Small World. I had a few nice photos of the hippo, but I picked the derpy one. I think I made the right call, don’t you agree? 😉 I also finally found time to see The Muppets Present… Great Moments in American History! Holy smokes, I can’t remember anything added to the park recently that I liked this much. Unlike the recent television show this was full “old school” Muppets. I’m so incredibly hopeful that this is telling of what’s coming in the parks. Seriously, if this is happening while you’re in the parks do not miss it!! Jungle Cruise was looking great (give or take that extra brown water) and our skipper was the cutest. I wanted to make sure I got in one more ride before The Jingle Cruise takes over. I don’t believe a date has been announced, but it’s normally in November. I guess I’m ready for 9 long weeks of Christmas to take over…. We also popped in The Tiki Room. They really are allowing dole whips into the show now! I think we all know I’m more of a citrus swirl gal, but I grabbed a close by dole whip to enjoy during the show. Tiki Room (and everything else) is definitely better with a sweet treat! We didn’t actually ride The Pirates of the Caribbean, but I spent some time poking around the gift shop. I know this guy has been out for a while, but I thought he deserved to be featured. This spot is what got us talking about a Disney Cruise again. I miss Pirate night! Have you been on a Disney cruise? Did you love Pirate night as much as I did?? Okay, one last photo then I promise we’ll move on to something else. This is the first time I’ve seen this pie eyed pirate Mickey. I love seeing this version of Mickey in the parks. Do you like the pie eyed Mickey or do you prefer the newer looking dolls? There was also a Minnie, but I won’t make you look at even more merchandise photos! I stopped into the Studios this week to check on Muppet progress. I hadn’t really paid much attention, so I was pleasantly surprised. Check out the new sign at the bathrooms by Muppet Vision! I love that they’re adding theme to an area that they could have just ignored. This whole little area in the back is becoming Muppets central! Around the corner PizzeRizzo is coming right along. I don’t know if you’ve seen the menu, but it looks a lot like the old Pizza Planet menu. While I’m not really surprised or excited about it, I’ll be checking this place out when it opens for sure! What do you think? Are you excited about this new area coming to Disney’s Hollywood Studios? I took a photo of Miss Piggy just out of tradition, little did I know it might be one of the last ones of the fountain. This week the fountain has been turned off and it’s being used as a planter. There are rumors that it may permanently become a planter! Personally, I’m going to hope repairs are being done and the fountain will return soon. I’ll keep you updated! I couldn’t visit the Studios without hopping on at least one ride. The Great Movie Ride is a little different now that TMC is sponsoring. It isn’t bad, just a change. I’ve heard so many neat rumors about the future of this attraction. I’m really hopeful that maybe something cool will be coming after Star Wars Land and Toy Story Land are added. My favorite rumor is The Great Mickey Ride. What would you like to see in this space? So from one dark ride to another, let’s hop over to Epcot! I didn’t have an excuse to include this photo, but isn’t Figment adorable? I just loved how cute and happy he looked so I couldn’t leave him out. From here we’ll continue on in a calm and Figment free manner! 😉 Getting back to the reason I was at Epcot, I wanted to rope drop the park for photos and an attempted ride on Frozen Ever After. If you’ve tried to get a Fastpass you know it’s just about impossible for this ride! We arrived at the gate at roughly 8:45am on a Sunday and immediately hustled back toward the World Showcase. Of course, I stopped for a few photos along the way! I was sure there would be hoards of people running with us, but the walk was pretty empty. As we got to Mexico we started passing people complaining that there was already a line for Frozen Ever After and the park hadn’t even opened yet. I braced myself to walk into a mess, but with Mexico still closed it was easy to get a nice photo at least! Arriving at Norway at 8:55am it was noticeably busy, but the posted wait time was only 30 minutes. I jumped right in line and ended up only waiting 20 minutes. The secret was that we were past the Fastpass line before the first 9:15am window. I noticed the line moved much more slowly once the Fastpass folks joined the queue. I also noticed the ride looked great first thing in the morning. Everything was working much better than when I rode later in the day. As we left the building it was about 9:20am and the wait was posted at 60 minutes and the crowd was enormous. I think it’s safe to say getting there earlier is the best chance of getting on the ride. After conquering Frozen Ever After we started back towards Future World to find more fun. I was lucky enough to catch the monorail rolling by. I know this photo isn’t anything special, but I just love it. It perfectly captures just strolling through Epcot on a Sunday morning. It never takes long for us to end up on Living with the Land. We even scored the front row! How amazing is the view just as you’re entering this green house? They’ve started adding seasonal displays in the greenhouses. I’m going to call this one a “fall” display and hope it’s still around for Thanksgiving. If nothing else, maybe they won’t totally turn it into a Christmas display for another few weeks. 😉 While it was a little warmer last weekend (86 degrees) it was still such a pretty morning in the park. I had great luck catching photos of the monorails as they breezed by overhead. I go back and forth, but I think Epcot is the prettiest park. (At least I think that this week!)  😉 We stopped by The Seas with Nemo & Friends, but decided to skip it. The crowds were already swelling in the parks by 11:30am and we were ready to head home. As I walked out of the park I took one last photo of Spaceship Earth. I love trying to find new angles to share with you! What an amazing week here at Walt Disney World! 😀 And that’s everything for this week. Thanks for reading! Please let me know in the comments below what you’d like to see next time around. I’ll be back on Thanksgiving to share more fun. Until then – I hope you’re having the best week ever!

12 thoughts on “Daisy’s Best Week Ever November 3, 2016: Everything But Animal Kingdom!”