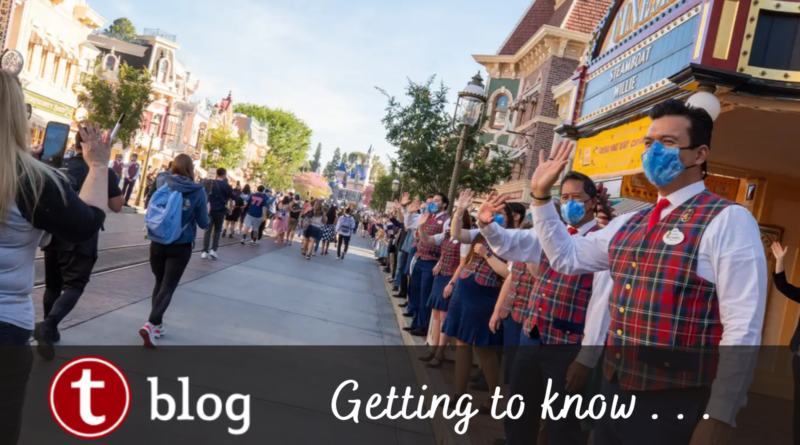 You may recall that last week, we ran an article outlining all of the ways that planning a trip to Walt Disney World was different in the wake of COVID. Well, things have changed at Disneyland as well. Some of those things are basically the same as they are in Orlando, but there are some notable differences as well, which generally trend towards being more restrictive than at Disney World. Read on to stay up to date on what you need to know to plan a trip to Disneyland after COVID!

Again, despite this article being couched as a “post-COVID” planning guide, COVID is still with us, and Disneyland has several changes to its operations to promote safety. The current restrictions are somewhat more restrictive than they are in Orlando, and are as follows:

Physical distancing remains in place at Disneyland, and there are markers and barriers to direct and distribute guests.  Guest parties are limited to no more than 3 households per party.

At restaurants, scannable QR codes are used to allow you to view digital menus on your phone. For quick service locations, mobile ordering via the Disneyland app is highly recommended.

These restrictions and practices are subject to change without notice.  For the most complete and up-to date protocols, consult Disneyland’s site.

As is the case at Disney World, if you want to go to Disneyland, you now have to have a ticket and a Park Reservation.  Do NOT just roll up to the park, ticket in hand, and expect to be admitted. Park reservations are free, and need to be made in advance.

Right now, park reservations in the near term are pretty scarce — the entire month of June is blocked out, but things start to open up in July: 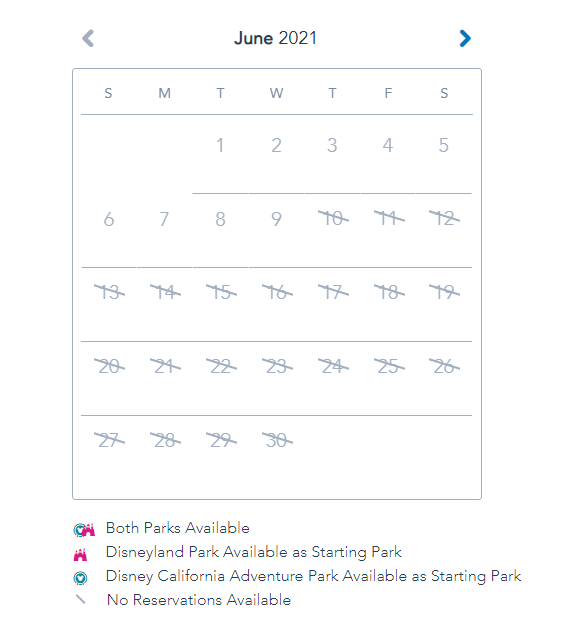 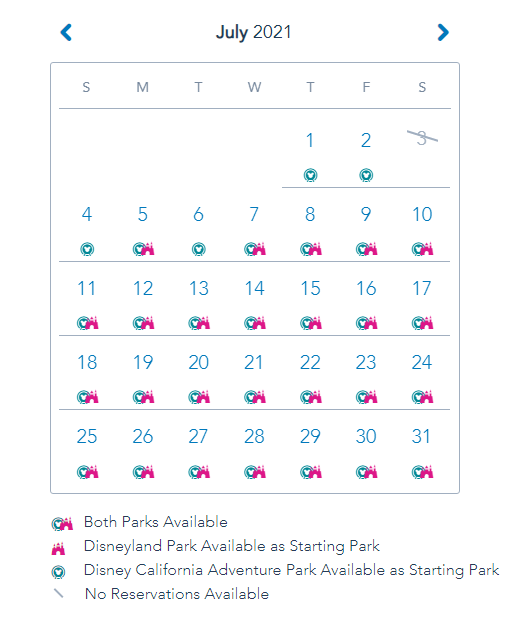 With that said, Disneyland has just reopened in the relatively recent past, there is a new land at Disney California Adventure (Avengers Campus), and park capacity remains limited, so there are a number of factors driving both supply and demand. It would be our hope and expectation that as we move forward and people have had an opportunity to get back to the parks and capacity is increased, you’ll be able to get reservations with less advance notice.  Right now, however, it is advised that you book as far in advance as you’re able if you’re planning to visit Disneyland.  Theme park reservations can be made up to 120 days in advance.

The process for securing admission to Disneyland is as follows:

You can make changes to your reservations after you have made them, subject to availability. Our recommendation would be to do all of the above as part of a single process, as park reservation availability can change quickly.

Park hopping is available for guests with a Park Hopper Ticket. For the first park, you will need to make a Park Reservation as above, just like any other park guest, but note that you need to specifically make a park reservation for the park hopping option (the availability is slightly different, and generally more expansive). After 1 p.m. after you have visited your first park, you are able to hop to other parks who still have available capacity for that day. Despite the limited availability of park reservations generally, however, guests have not reported any difficulty with park hopping. For more details and the most up to date information, check here.

As is the case at Disney World, while most of the attractions, particularly rides, are open, a LOT of the other experiences are currently dark, especially entertainment. There are no fireworks, no parades, and many of the shows are not running right now.  Traditional character greetings are currently dark, but Disneyland does have characters stationed around the parks for photo opportunities.  Some of these interactions have traditional queues (most notably for the princesses), while others are more a matter of getting yourself in the right position and waiting for the character to look your way. These experiences are distanced, as you can see in the photo, but the characters do still interact with you, face characters will speak with you, and all things considered, it works okay.

Many queues have been relocated and boarding processes have been changed to encourage maintaining distance. For an overview of some of the more notable changes, check out Guy’s overview of the changes from shortly after the parks reopened, but be aware that these operational tweaks are being modified on a regular basis.

You may have heard that Disneyland is currently operating at reduced capacity, which is true but doesn’t really tell the whole story, just as is the case at Disney World, in that it implies that you’re always going to see lighter crowds than normal. When Disney refers to operating at a certain percentage of capacity, it is a reference to the actual capacity of a park — which is a pretty high number, the number at which they’ll stop admitting people — not necessarily a percentage of the crowd that you might otherwise expect to see at the park all else being equal. On days that would ordinarily be busy, limiting capacity means that there are fewer people than there would otherwise be, but on day that wouldn’t otherwise be very busy, the artificially limited capacity could be the exact same number of people we would expect to see on that day. In other words, you might see lower crowds, but you might not notice a difference.

At the moment, neither old school FastPass (at the kiosks) nor its tech-ier sibling, MaxPass (which uses the Disneyland app), are being used in the parks. Certain attractions do, however, use virtual queues in lieu of asking you to physically wait in line.  At Disneyland Park, Rise of the Resistance is using boarding groups, as is Indiana Jones under certain circumstances. Note that this is the ONLY way to experience Rise, there is no standby queue, just as before, though Indiana Jones does still use a regular standby queue until it gets busy.  At Disney California Adventure, WEB SLINGERS: A Spider-Man Adventure is using the virtual queue system, and there is no standby queue for that, either. The process for obtaining a boarding pass for Spider-Man is explained here; it’s essentially the same as the process for getting one for Rise of the Resistance with which Disneyland faithful are familiar — get on the Disneyland app at the appointed hour and hope the Boarding Pass gods favor you that day.

Of course, not having FastPass means that having a plan is a lot more important. Our Personalized Touring Plans and the Lines app are great tools to see as much as possible with minimal waiting, even without FastPass. Before you head to the parks, make sure you have them ready to go!

Dining reservations for table service restaurants can still be made at the 60 day mark.  Guests are encouraged to use the Disneyland mobile app to check in with the restaurant to minimize interactions.  As capacity remains limited for the time being, ADRs are strongly recommended. Places that would typically be buffet dining are currently offering food family style, or have moved to menu-based offerings, and there is no character dining being offered at Disneyland at all as this goes to press.

For quick service locations, mobile ordering via the Disneyland app is strongly encouraged. Make sure you’re acquainted with the process for making a mobile order

While more and more things are opening up each day, it remains the case that not all restaurants and shopping locations are open, and those that are open may have operational changes, or may not be offering all typical services. These changes are occurring on a near-daily basis, so if a particular experience is critically important to you, make sure that you check in advance to make sure it is being offered.

For those that are driving to Disneyland, note that tram from the Mickey & Friends parking lot is not currently operating. Guests will need to walk along the tram route to the esplanade. The Pixar Pals parking lot is not open, Mickey & Friends is the only place to park. For guests that may have difficulty with the extra walking, consider using one of the guest drop-off locations before parking. On the Downtown Disney side, take Magic Way from Disneyland Drive, then turn left at Downtown Drive and follow signs to the drop-off area.   If you’re approaching the resort from Harbor, enter the drop-off area from the right southbound lane of South Harbor Boulevard between South Manchester Avenue and Disney Way.

Is Disneyland Still Worth Visiting?

Obviously, there are some big changes here, and they have a noticeable impact on the park atmosphere and operations, but it is still more than possible to go to Disneyland and have a great time. If this is your first time to Disneyland and you’re planning a big trip, maybe you will want to wait until things are more “back to normal,” but veterans will likely love being able to be back at Disneyland regardless. Have your expectations properly set before arriving, and it will make it easier to enjoy the experience for what it is.

In closing, many thanks to Guy Selga, Jr. for providing much of the background information in this article. Make sure you check out his posts that are linked herein! Also, thank you to @catarroni for providing some last minute, on the ground intel and pics!

Have any questions or comments? Let us know!