Recently, we brought you the first word on Epcot After Hours Wind Down, a brand-new after hours program that began on April 17 at World Showcase in Walt Disney World’s Epcot park. Because we are will to sacrifice almost anything — including sleep, brain cells, and our livers — to bring Touring Plans readers complete coverage, my wife and I volunteered to be opening-weekend guinea pigs for this new food and alcohol tasting adventure (it’s a tough job, but someone has to do it…). Now that our hangovers have cleared, enjoy this exclusive in-depth Epcot After Hours Wine Down review, covering the experiences offered at Mexico’s La Cava del Tequila and Morocco’s Spice Road Table.

Since I developed a new appreciation for tequila while reviewing Universal CityWalk‘s Antojitos, I chose to attend the Wind Down tasting at Mexico’s La Cava del Tequila, long one of my favorite bars inside any theme park. The tasting sessions are scheduled to begin at 9:20 p.m., but because we watched IllumiNations before from near Morocco (on the opposite side of the World Showcase lagoon), I didn’t arrive until approximately 8 minutes into the session. I suggested that they hold the start time until at least 15 minutes after the closing fireworks, but until that change is made I strongly suggest watching the show from a spot nearby your selected tasting venue. 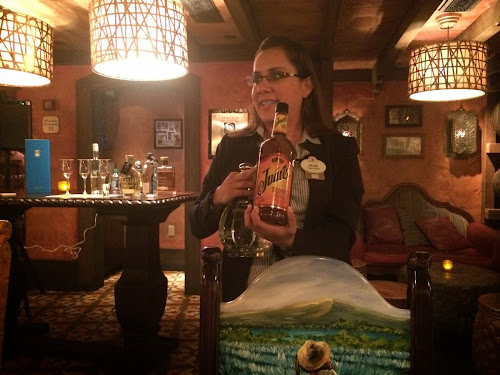 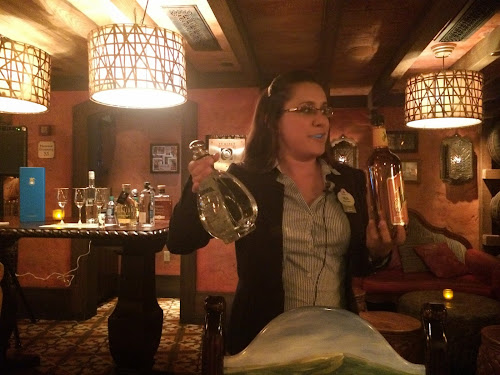 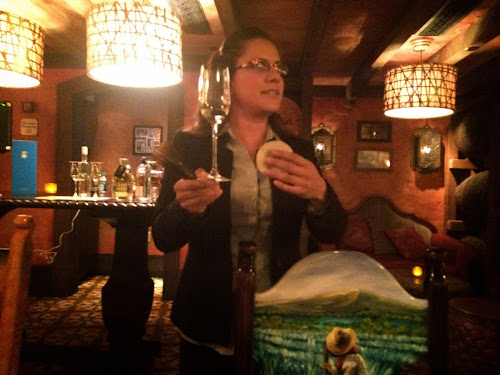 Luckily, I recently had an introductory education on the history and theory of tequila making, so I was quickly able to catch up with the already-in-progress lecture from Hilda, our informative “tequila ambassador.” She cheerfully covered the essentials of ingredients (if it doesn’t say “100% agave” don’t drink it straight, only mix it in margaritas), distillation and aging (to produce blanco, resposado, and anejo varieties), and proper drinking techniques (swirl, sniff, and sip). 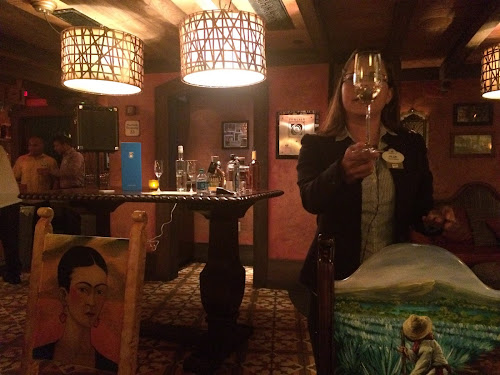 Most importantly, we were provided with a variety of samples to interactively accompany Hilda’s instruction, starting with 3 half-shot samples — Ambhar Blanco, Partida Resposado, and Casa Noble Anejo — served in small stemmed glasses (all the better to sniff with, my dears). As an added bonus, we also were given a half-shot of mezcal (a strong, smokey cousin of tequila make from the maguey plant) and a quarter-shot of vodka to “cleanse the palate.” 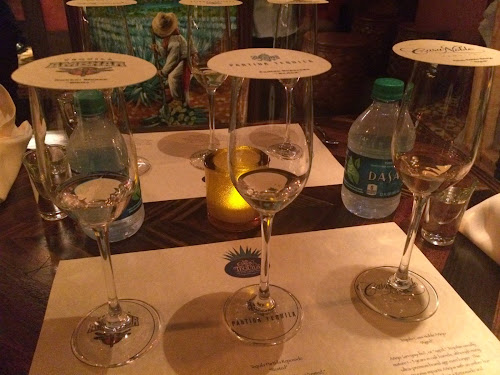 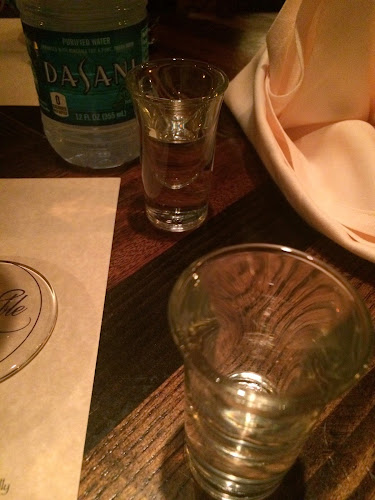 Towards the end of the 30-minute tasting session, each participant was provided a platter with 3 appetizer samplers, all of which I enjoyed, and none of which are listed on the bar’s standard menu. Shredded pork on a corn-based cake came with a fresh avocado slice on top, though several other diners said it was too spicy for them to finish. The shotglass of shrimp ceviche had a nice gazpacho-style tang, and was my favorite taste. Finally, a tostada topped with shredded seasoned chicken seemed to be the preferred pick of most of the other 8 attendees that evening. 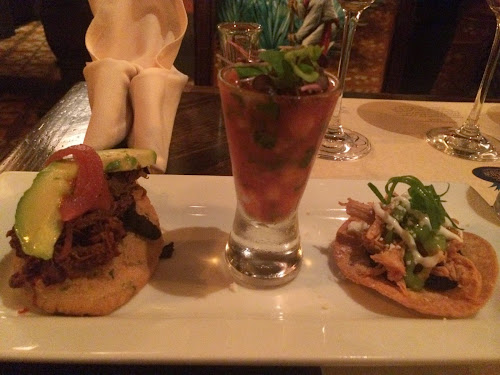 The formal Wind Down session wrapped up before 10:00 p.m., but we were encouraged to order anything we wanted from the bar’s standard menu and stay until 11. 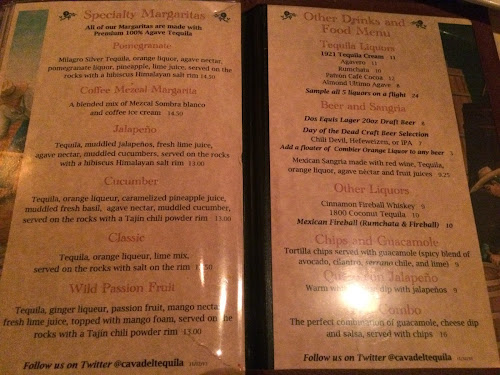 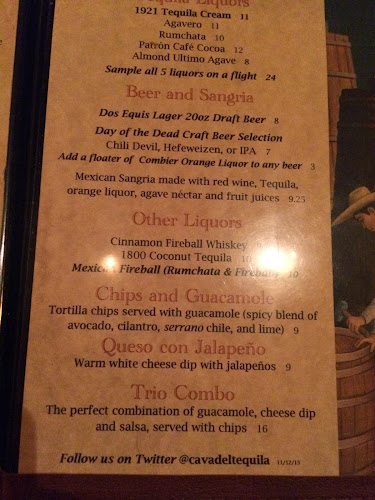 After chatting with my fellow Wind Down-ers, I ordered one more for the road (jalapeño margarita, my favorite) and took a slow stroll clockwise around World Showcase. 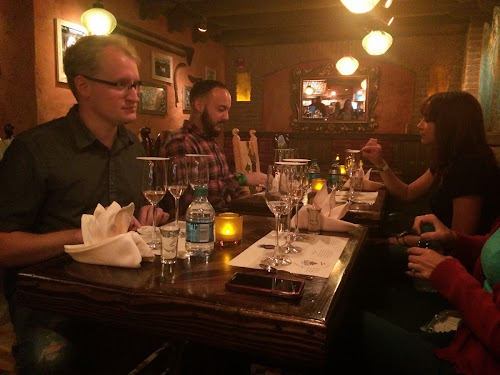 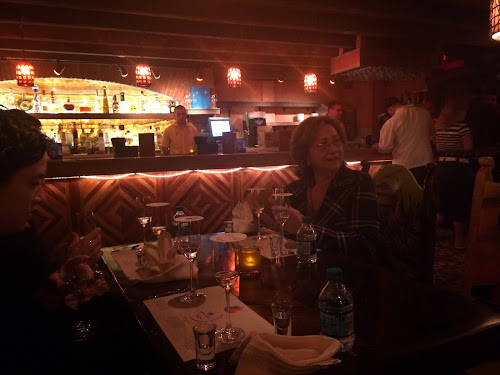 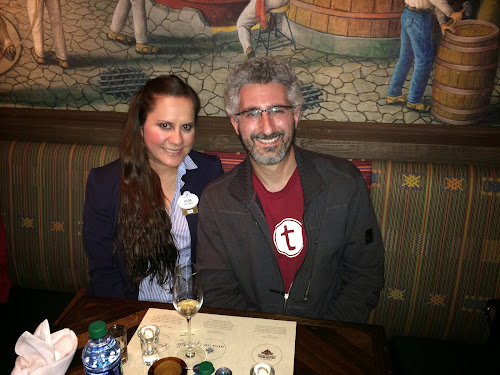 The park was nearly deserted, save for a couple stragglers and exiting cast members. No attractions, shops, or other restaurants were accessible, but I was free to wander around the World Showcase promenade at will. At no point did Security make me feel like I was getting the “bum’s rush,” and we didn’t end up exiting Epcot via International Gateway until well after 11:00 p.m. 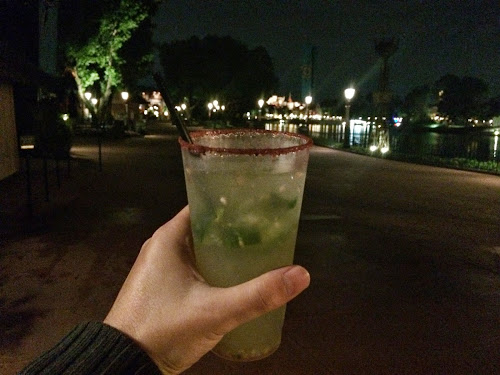 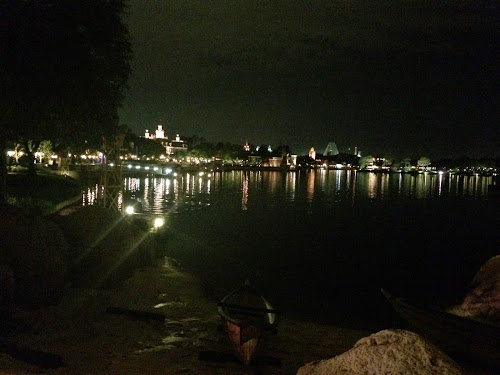 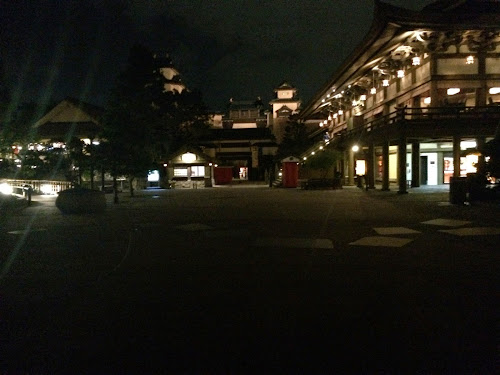 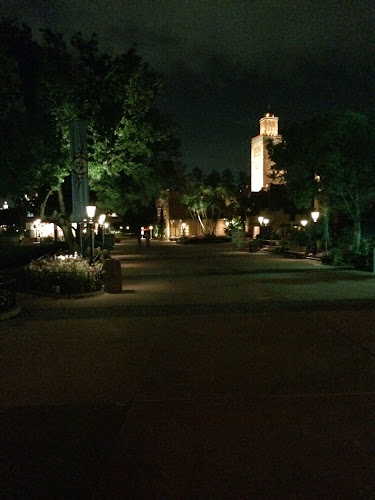 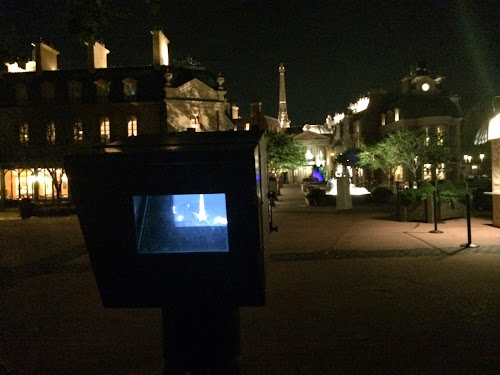 Meanwhile, as I was downing tequila in a cave, my wife Genevieve was having a very exclusive experience at Spice Road Table in Morocco. It turns out she was the only guest to reserve the Wind Down experience that evening, and as a result she received extraordinarily attentive service from the restaurant’s entire staff. 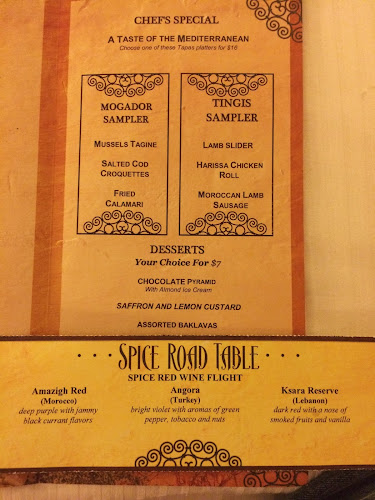 The Morocco tasting included three 3 oz. pours of wine, with a choice of red or white varieties. She chose red, and received an Amazigh Red from Morocco (her favorite), Turkish Angora (her least favorite), and Ksara Reserve for Lebanon. In addition, she was given a glass of house mimosa, but that was a special “thank you” that may not be included in the standard tasting. 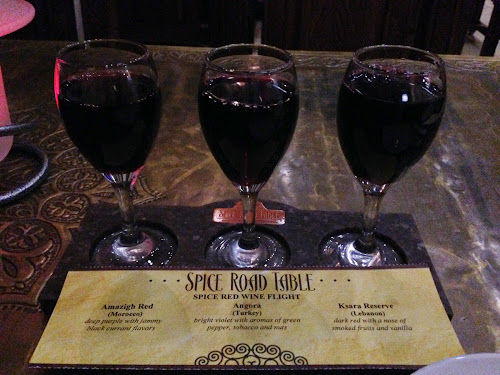 For food, she was given the Tingis “taste of the Mediterranean” chef’s sampler, which is also found on the standard menu. It includes harrissa chicken roll (southwestern-style egg roll with a seasoned ketchup-based sauce), lamb slider topped with tzatziki yogurt, and a spiced lamb sausage – which was so good that she ordered another portion off the menu. 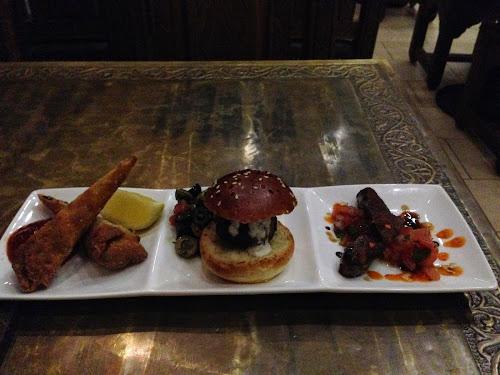 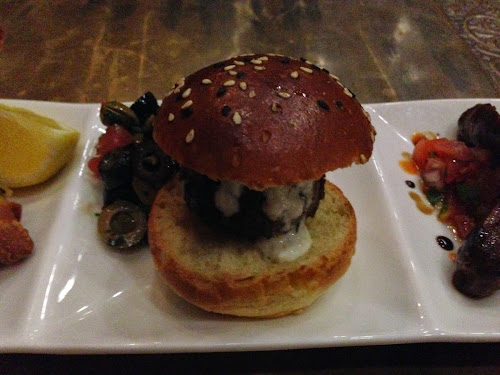 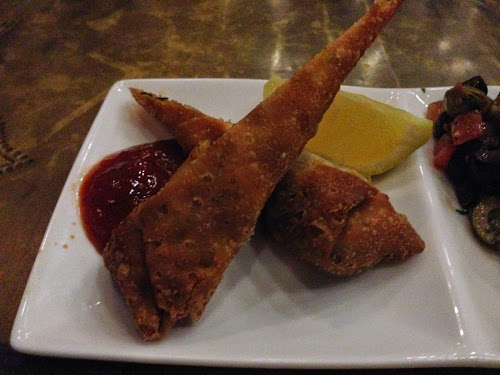 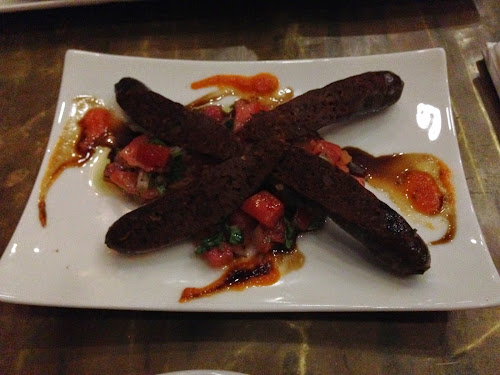 The bill of fare concluded with her choice of dessert; the chocolate pyramid cake with almond ice cream proved delicious, and too filling for her to finish without assistance. 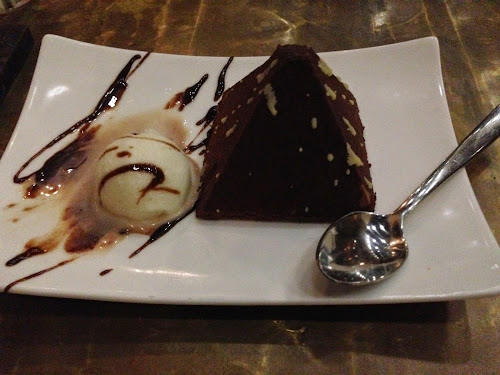 The Moroccan After Hours Wind Down experience didn’t included as detailed an educational talk as my tequila tasting did, but Zineb was an extremely friendly and engaging server throughout the evening. By the evening ended, the two of them were posing for pictures like old friends. 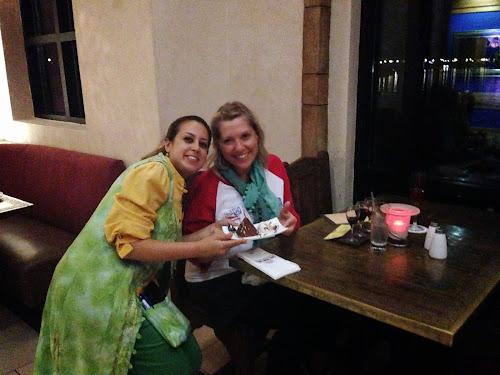 In addition, the manager, chef, and other staff members all stopped by to thank her for attending, truly demonstrating the spirit of hospitality that Morocco is renowned for.

The Bottom Line: Is Epcot After Hours Wind Down Worth It?

When the World Showcase Wind Down was first announced, some scoffed that Disney was simply tacking on another cover charge to what is already the world’s most expensive watering hole, which isn’t entirely untrue. But, while far from cheap, I found the $35 event fee a reasonable value, at least by Orlando theme park standards. (Note: Tables in Wonderland and other discounts may NOT be applied to this program.)

For my La Cava experience, I received four half-sized drinks and three single-serving appetizers, each of which would probably cost around $5 if offered at Epcot’s Food & Wine Festival. That adds up to $35 right there, before accounting for tax and tip. At Morocco, the exact same wine flight, food sampler, and dessert included in the Wind Down can be ordered at any time for at total of $36, before tax and tip.

You also need to factor in the educational value (in the case of the tequila tasting) or the attentive atmosphere (as at Spice Road Table), which may be worth more to some patrons than others. Finally, you should consider that the opportunity to be one of the only people inside the park, long after everyone else has left, may be priceless to devoted Disney fans. If you’ve never been the last to leave a Disney park, the quiet and solitude can be indescribably magical, especially when security allows you to take all the pictures and time you want on your way out. 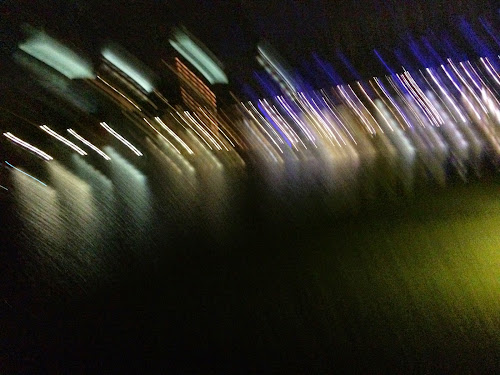 I’ll end my Wind Down review with a couple final words of warning for those who do chose to attend. Watch your wallet, because adding on a drink or appetizer (as your server will encourage) can quickly send your total tab into “special occasion meal” territory. And if you do exceed your limit, please make sure you have either a room on property or safe ride home; you can’t wind down if you wind up in an accident.