I recently updated the FastPass+ recommendations for each of our 50 Magic Kingdom Touring Plans, using our latest computer models to save you the most time in line. The biggest change is that Seven Dwarfs Mine Train is recommended more frequently, because FastPass+ reservations are more readily available now than when the ride first opened.

As before, each of the touring plans suggests the FastPass+ recommendations you should make in advance of your visit, like this:

Suggested start times for FastPass+ reservations:
Seven Dwarfs Mine Train = 9 AM
Peter Pan’s Flight = 10 AM
Enchanted Tales with Belle = 11 AM

When I updated the plans, I kept count of many times each attraction was identified as needing FastPass+. If you’re building your own touring plan, or you prefer an unstructured tour, this list shows the hot spots in the Magic Kingdom: 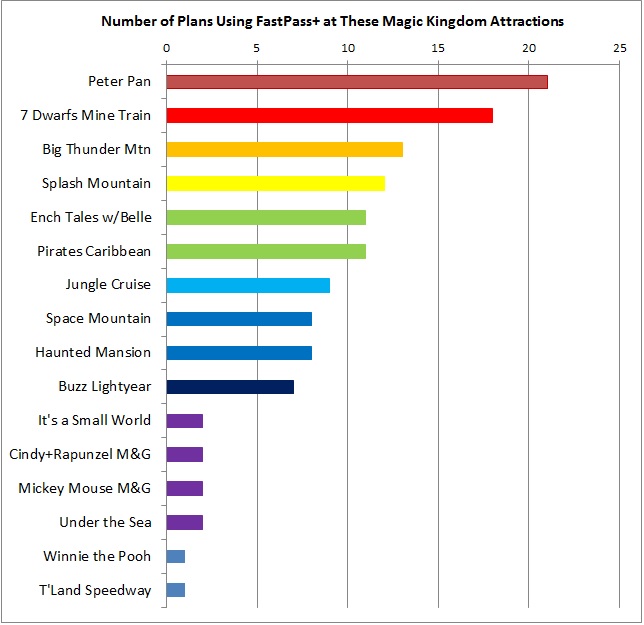 Just like last year, Peter Pan’s Flight is the most frequent recommendation for FastPass+. Why? Probably three reasons:

Seven Dwarfs Mine Train, in the second spot, is usually the first FastPass+ recommendation our software suggests, often with a start time between 9:00 and 9:30 AM. If you’re doing a comprehensive tour of the Magic Kingdom, that allows you to visit Space Mountain and Buzz Lightyear as soon as the park opens, then ride Seven Dwarfs Mine Train with little wait. It also puts you in a good position to ride a couple of secondary Fantasyland attractions before a 10:00 AM Peter Pan’s Flight FastPass+ reservation, and that helps cut down on how much walking you have to do in the park.

Enchanted Tales with Belle makes the top five because it usually doesn’t make sense to visit it first thing in the morning. Counting walking time to Belle and the elaborate pre-show process, you’d probably be committing about half an hour to that one attraction, whereas you could probably visit 2 or 3 other attractions in Fantasyland or Tomorrowland in the same amount of time.

Pirates of the Caribbean and the Jungle Cruise are interesting additions to this chart, because our software usually recommends these as day-of FastPasses, not one of the 3 you’d get in advance before you arrive at the park. Take a look at the chart below and you’ll see that most of our Jungle Cruise recommendations are for late afternoon, day-of FastPass+ reservations. Why? These aren’t in the top tier of popular attractions in the park, and they’ve got enough capacity to move a lot of people per hour. Those two things help moderate waits, so other attractions are generally more important for your first set of FastPass+ reservations.

Space Mountain appears on the list probably because of the Seven Dwarfs Mine Train. The Mine Train is still a hot attraction in Magic Kingdom, and it also has a shorter height requirement than Space Mountain (38 inches vs 44 inches), meaning more families want to ride it. Space Mountain is followed by Buzz Lightyear in many of our touring plans, to minimize how much you have to wait at these popular rides.

What about the Anna & Elsa meet and greet at Princess Fairytale Hall? Demand for those FastPasses still far exceeds supply on most busy days, so it’s unlikely that most families will get one. Because it’s unlikely that FastPasses will be available, the software doesn’t recommend trying. If you’d still like to meet the princesses, the waits are lowest first thing in the morning.

Attractions In Our Touring Plans That
Never Need FastPass+

It’s also worth noting that we don’t usually recommend using an advance FastPass+ for the Main Street Electrical Parade, Wishes fireworks or many shows, so they don’t appear on this list. FastPass+ at parades, fireworks, and shows usually only gets you a guaranteed seat or spot to stand. You still have to arrive early to stake out a prime viewing location, so you don’t end up saving much time. We think you’re better off using FastPass+ to avoid long waits in line. The touring plans do recommend checking for FastPass+ reservations for the nighttime entertainment once you’ve used your last attraction FastPass reservation though.

Our touring plan software tends to recommend Seven Dwarfs Mine Train, Peter Pan, Big Thunder Mountain, and Enchanted Tales with Belle a lot in the morning. All of the other attractions tend to have their FastPass+ recommendations in the middle to late afternoon.

Magic Kingdom’s FastPass+ kiosks are located throughout the park, including:

Other Tips and Advice for FastPass+ at Magic Kingdom

Tips and advice for specific attractions and touring FastPass+ attractions in Magic Kingdom:

17 thoughts on “Your FastPass+ Priorities for the Magic Kingdom”