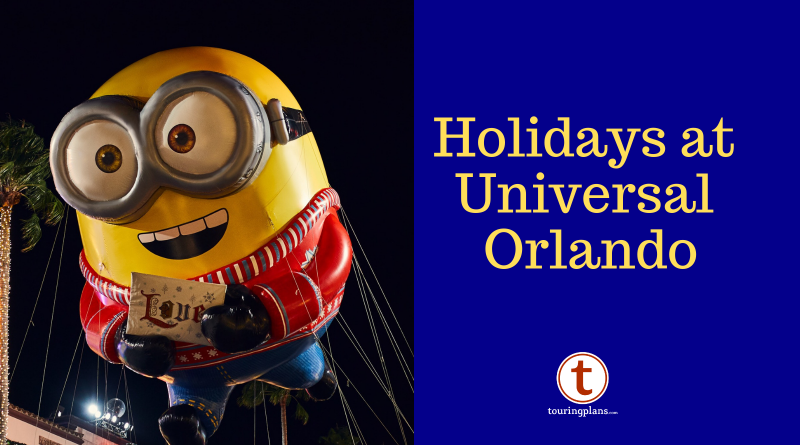 Trim up the tree with Christmas stuff, like bingle balls and whofoo fluff! Universal is celebrating Christmas and the New Year throughout the resort with parades, live shows, concerts, and fireworks. We love the holiday season at Universal, so join us as we cover all the festivities around Universal.

Christmas is a time to breathe and rest in the Harry Potter books. A time of reflection on that year’s events, Christmas provides our heroes time to spend alone, with family, or celebrating at the Yule Ball. Harry receives many of gifts like the Invisibility Cloak and Firebolt broom that help him confront the mysteries before him in the last half of the school year. Celebrate with the rest of the Wizarding World in Hogsmeade and Diagon Alley with shows, decorations, and more.

Celestina Warbeck and the Banshees is one of our favorite theme park shows and as such we are in love with her Christmas-themed show. Celestina sings original Christmas songs inspired by the Wizarding World (think My Baby Gave Me A Hippogriff for Christmas) while the Banshees supper her with backup vocals and dancing. During the calypso themed Accio Christmas her spell even conjures up a snow in the middle of Diagon Alley! Celestina’s Christmas show is a must watch for all visitors and is performed several times per day next to The Hopping Pot in Diagon Alley.

After the sun sets Hogwarts Castle magically transforms before guests’ eyes to celebrate Christmas. Held every half hour from park dusk to park close, The Magic of Christmas at Hogwarts uses projection mapping, fireworks, music, and lighting to transform the castle grounds into a winter wonderland. Music from the Yule Ball will play, presents will unwrap, and the memories from Christmas breaks in the books are relived. The show runs continuously, but due to popularity you might have to wait for the prior audience to leave before watching.

Universal Studios takes all our favorite Christmas traditions and brings them to life in one park. The New York and Hollywood areas are decorated with holiday lights, Macy’s balloons march down the street, characters wear holiday garb, and on select nights a concert of festive music occurs.

Last year Universal unveiled a brand-new nighttime parade for the Christmas season, which kept the highlights of the old parade with brand new elements. Universal’s Holiday Parade featuring Macy’s brings the gigantic balloons made famous by the Macy’s Thanksgiving Day Parade to Florida with a dash of Universal spunk. New floats and balloons were created for the parade and star Shrek, Despicable Me, Madagascar, and Santa. The parade is giant in scope and scale; it takes the normal Christmas parade and turns it to 11.

The parade starts outside of Horror Make Up and travels through Hollywood, Production Central,  and New York streets. There are two ideal spots to watch the parade: outside of Horror Make-Up and Mel’s Drive In to see the parade enter and exit along with in New York between Race Through New York and Revenge of the Mummy attractions to see the tree lighting with Santa. Arrive at these two locations at least half an hour prior to show time and up to an hour on busy days. Other locations to see the parade are available ten minutes to half an hour prior to show time. The Blues Brothers perform Christmas classics and decorate for the holidays in their own unique way. The show is a high-energy and funny musical comedy act that takes place across from Revenge of the Mummy several times per day. The show attracts passers by to sing and dance along. Arrive prior to show time on the curb outside of Finnegan’s.

Did you know Mannheim Steamroller has had eight Christmas albums go Platinum? They have sold more Christmas music than any other performers and they are at Universal Studios. Mannheim Steamroller orchestra and singers perform at 7:00 p.m. on the Universal Music Plaza Stage on weekends (November 17 through December 16). Since the parade performs at 5:30 p.m., on concert nights guests immediately head to the Music Plaza Stage afterwards. For guests who want to be as close to the stage as possible show up 90 minutes prior to show time. For good viewing for the rest show up 45 minutes prior to show time.

Giant color changing trees and large garland decorate Seuss Landing, the Christmas destination for Islands of Adventure. Whoville residents roam spreading holiday cheer and interacting with guests as they decorate for the season. The Whos are friendly and offer a great photo op for guests. On select days a special The Grinch & Friends Character Breakfast is held at Circus McGurkus Cafe, where you can get up close and personal with The Mean One himself. Breakfast is $34.99 plus tax per adult and $20.99 plus tax per child, park admission is required.

A large cast of Whos (and the Grinch) bring the beloved television special How the Grinch Stole Christmas to life as a large musical production. For this  year the show went through a complete overhaul with new costumes and sets to mirror the timeless TV special. The show features all your favorite songs, moments, and an adorable Max the dog to warm your heart. Grinchmas Who-liday Spectacular is charming, funny, well acted, and one of the best live shows in Orlando; a trip to Universal during the holidays is not complete without a viewing. The show runs several times per day, arrive half an hour prior to show time to guarantee a seat inside the theater.

Images courtesy of Inside Universal.

Brand new for 2018 are an assortment of scrumptious food items at the resort. The Three Broomsticks is offering a new four-person Holiday Feast (harvest salad, roast turkey, stuffing, roasted potatoes, root vegetables, and apple pie) along with a single serving Holiday Dinner (roast turkey, stuffing, and vegetables). What is the holidays without copious amounts of deserts? Universal has new tarts, cookies, and cupcakes to offer around the parks along with a pumpkin pie cheesecake, red velvet yule log, and apple strudel on a stick (everything tastes better on a stick). Here at Touring Plans we think Voodoo Donuts is the bees knees, and this season they knocked it out of the park with a Grinch decorated donut.

New Year’s Eve and the Resorts

Each of the Universal Orlando resorts celebrates the holidays with tree and menorah lighting ceremonies, seasonal carolers, visits from Santa, and more. On Thanksgiving, Christmas, and New Year’s Eve each of the resorts will also offer special holiday feasts for guests. For a complete listing of events, dates, and prices visit the Universal Orlando Hotel Holiday Events site.