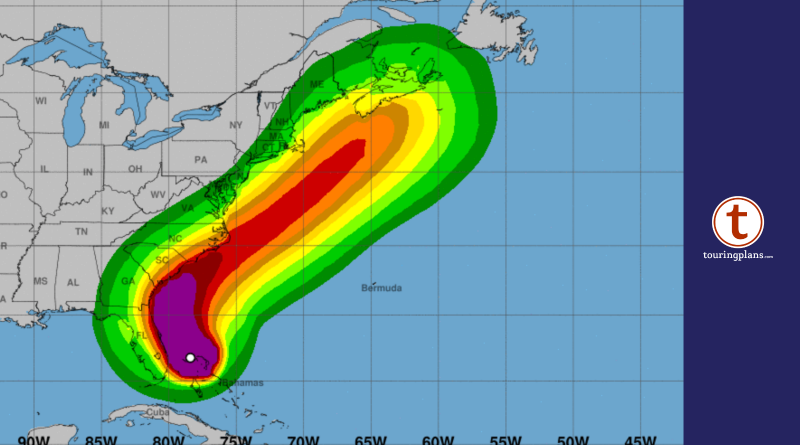 It’s still very much a wait and see game here at Walt Disney World. We have had a few “breezy” rainstorms blow through this afternoon, but short-lived and currently we’re sitting with sunshine and 15 mph winds. The expectation tonight is that conditions will start to deteriorate, and just a few minutes ago a list of closings and cancellations has been issued for Walt Disney World (see below).

As of 5:00 p.m., all of Walt Disney World is under a Tropical Storm Warning. This indicates that tropical storm conditions (sustained winds of 39 to 73 mph) are expected within the specified area within 36 hours or less. Here’s the 5:00 update. 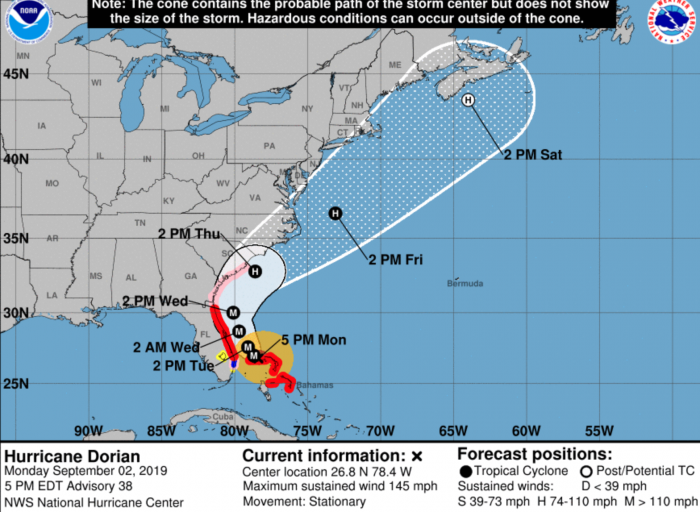 DISNEY CRUISE LINE: The Monday, September 2 sailing that was moved to Wednesday, September 4 has now been cancelled. Due to changing conditions, people who left on Friday’s “3-night” cruise, originally scheduled to return Monday and then extended to Wednesday will now be staying an extra day on the ship with a return day of Thursday, September 5. No changes are planned to the next sailing of the Fantasy, which is scheduled to depart on September 7.

For Tuesday, September 3, the following changes have been announced

FORT WILDERNESS: Closed beginning September 3 at 3:00 pm. — no determination yet when the resort will reopen.

Closures are also possible for Copper Creek Cabins at Wilderness Lodge, Treehouse Villas at Saratoga Springs, and Bungalows at the Polynesian

AFTER HOURS AT ANIMAL KINGDOM: Cancelled for September 3. Tickets may be exchanged for another After Hours event in 2019, tickets to Mickey’s Not-So-Scary Halloween Party or Mickey’s Very Merry Christmas Party, a 1-day flexible date ticket with park hopper that can be used prior to December 31, 2020, or a full refund.