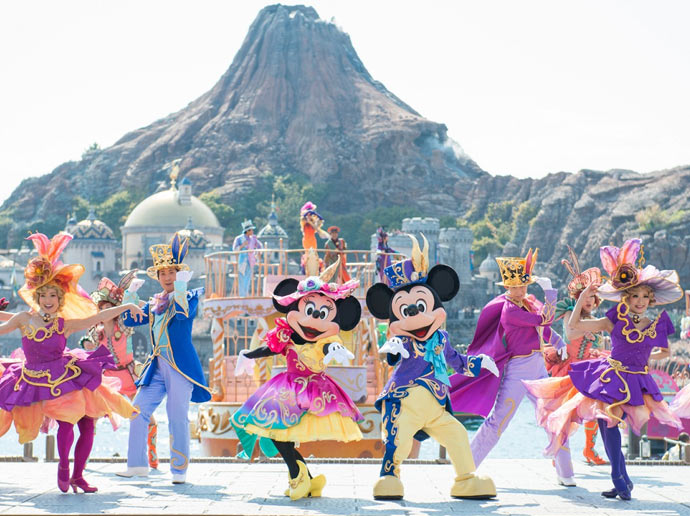 Welcome back for your monthly update on what’s happening at the International Disney Parks!

It might only be February, but Disneyland Paris is already planning ahead for the Marvel Summer of Super Heroes. Starting on June 10, you can enjoy meet and greets with some of the Avengers’ finest and/or take part in the Guardians of the Galaxy Awesome Dance-Off. Or, enjoy the spectacular Marvel: Super Heroes United show, which pits some of your favorite Avengers against the supervillian Thanos.

The event ends on September 30, but don’t worry, because there is even more Marvel in the future for Disneyland Paris. It was recently announced that the Rock ‘n’ Roller Coaster Starring Aerosmith, located at Walt Disney Studios Park, will be reimagined as a Marvel adventure. Not a lot of info has been released on this development, but we’ll keep you posted. Also, Disneyland Paris is further stepping up their Marvel game with the reimagining of Disney’s Hotel New York to feature the art of Marvel. The resort hotel will open in 2020.

Marvel is taking a role in more parks than just Disneyland Paris. New concept art was released for Hong Kong Disneyland for the Marvel expansion and upcoming Ant-Man attraction. The name of the attraction has not been released, but we do have a few key details to share. Guests will have the opportunity to join Ant-Man and The Wasp in a battle against Arnim Zola and an army of Hydra swarm bots. This is part of Hong Kong Disneyland’s multi-year expansion plan, which is projected to be completed in 2023.

In May of this year, the first of the expansion experiences will open with a new Adventureland stage show called “Moana: A Homecoming Celebration.” The entire, multi-year expansion will include a reimagined castle, as well as Marvel, Moana, and Frozen-themed areas.

The big news out of Shanghai Disneyland right now centers around the new Toy Story Land, set to open on April 26. The new land will feature three attractions. Slinky Dog Spin is a whirlwind adventure during which Slinky Dog chases his tail around a dog dish. Rex’s Racers has Rex manning the controls and zipping guests forwards and backwards on a race car. Lastly, Woody’s Round-Up has Bullseye pulling guests around in a choreographed, western dance. The land will also include meet and greets with characters (as yet unannounced), the Toy Box Café restaurant (which is already open), and Al’s Toy Barn.

Over the last few months we’ve spent a lot of time talking about Tokyo Disney Resort’s upcoming 35th Anniversary “Happiest Celebration!” As highly anticipated as it may be, there are amazing things happening before the anniversary kicks off. Namely, Disney’s Easter at Tokyo DisneySea.

Starting on March 27, DisneySea will begin celebrating their Easter event. You’ll find colorful Easter eggs, beautiful flowers, and special springtime decorations throughout the park. Festivities will also include the “Fashionable Easter” harbor show, as well as atmospheric entertainment in the American Waterfront. As always, there will be special event merchandise and treats that you can only find during this event. Additionally, guests can participate in an egg hunt throughout the park, with a chance to win a bunny ears hair clip for finding the hidden eggs! (There is a fee to participate in the egg hunt, and I do not know if there would be an issue with the language barrier.)

On April 15, the “Happiest Celebration” will kick off at Tokyo Disneyland. I’ve covered this event fairly exhaustively in the past, so I won’t force you to re-read the same news again. However, I will tell you that Tokyo Disneyland has announced that there will be two special Chocolate Crunch shops opening just for the anniversary. (I certainly didn’t have that info for the last article! I can get behind any resort that opens special chocolate stores for an event!) Chocolate Crunch is a Tokyo Disney Resort souvenir staple, and the two stores will both be found at Tokyo Disneyland’s World Bazaar. The Pastry Palace and Ice Cream Cone will each offer different ways to enjoy Chocolate Crunch.