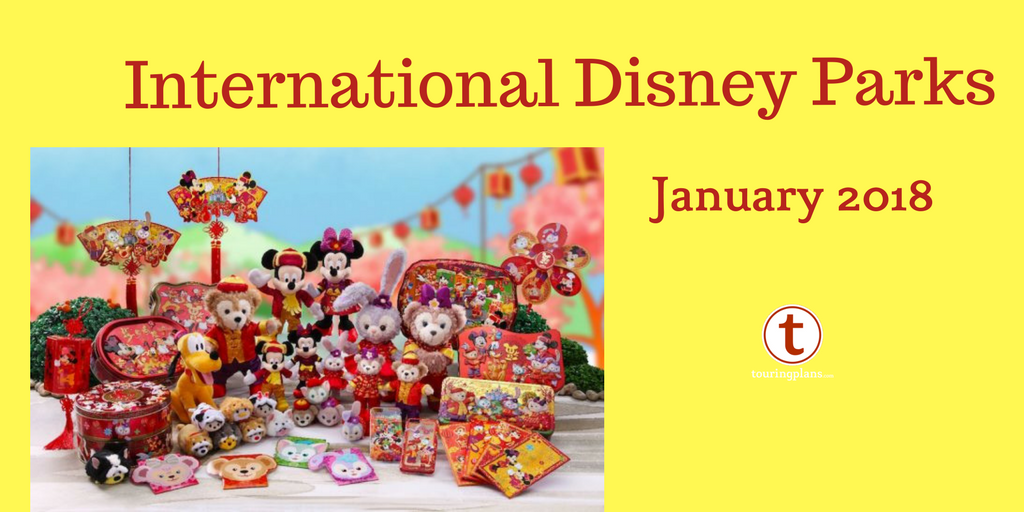 It’s time for the first International Parks Round-Up of 2018! There’s a lot of news to share, so let’s kick this party off with Disneyland Paris!

Firstly, Season of the Force is happening at Disneyland Paris right now through March 25th.  This event includes an interesting line-up of activities this year. The usual suspects are all in play, with daytime and nighttime shows and spectaculars, character meet and greets, and Hyperspace Mountain running at Space Mountain. In addition, there are five large-scale Star Wars vehicles on display. Built by fans, the models include an X-wing starfighter, ETA-2 Jedi starfighter, Imperial tie fighter, A-wing fighter and a combat assault tank.

Also in the line-up for Disneyland Paris is a brand new hard-ticket event that will be taking place on June 2nd. FanDaze will include exclusive new shows, rare character meet and greets, original dining menus, and a chance to hear from Disney Imagineers. This event will include more than 50 Disney characters, including the first Disney Parks appearance of Ortensia, a friend of Oswald the Lucky Rabbit. In addition, the entertainment offerings will include the Dance Your DuckTales Parade, PJ’s DJ Party, Jumba and Pleakley’s: Mission Stitch! Interactive show, Max-Live! Getting Goofy With It nighttime spectacular, and the Farewell Street Party at the end of the night. Lastly, original menus will be offered at restaurants and kiosks, along with limited edition merchandise, and a raffle for a night in the Sleeping Beauty Suite. All in all, this sounds like an amazing event at Disneyland Paris!

Hong Kong Disneyland is offering an exciting evening of activities for Chinese New Year. Chinese New Year is on Friday, February 16th, and as night falls in the park, Main Street U.S.A. and the Plaza will be transformed into a bustling Night Market. Mickey and Friends will visit guests to wish them prosperity, stalls will offer amazing food and drinks, and atmospheric entertainment will be all around you. During the day, the park will be decked out in Pluto-themed decorations to honor the Year of the Dog. Additionally, seasonal merchandise will be offered throughout the park.

Shanghai Disneyland is offering their own celebration for the Year of the Dog, with entertainment and decorations having already begun! The Garden of the Twelve Friends has been transformed into Shanghai Disneyland’s Wishing Garden for the duration of the holiday. Additionally, Gardens of Imagination is kicking off every morning with a drum ceremony. Celebration Square is home to Disney characters sporting vintage Shanghai costumes for the Shanghai Swing performance. Special menus are being offered throughout the park, as well as in select resort hotel locations. Lastly, a Chinese New Year Carnival is taking place every weekend at Disneytown. It includes live shows by Chinese folk artists, as well as holiday treats and activities.

Three events are currently taking place at Tokyo Disney Resort, including Anna and Elsa’s Frozen Fantasy, Pixar Playtime, and Duffy’s Heartwarming Days. Firstly, at Tokyo Disneyland, Anna and Elsa are the leading ladies in the Frozen Fantasy Parade and the Frozen Forever nighttime spectacular. Special menus inspired by the film are being offered at various restaurants throughout the park, and new event merchandise is on sale.

Secondly, over at Tokyo DisneySea you can find Pixar Playtime, featuring new-to-the-park shows. The Pixar Playtime Pals show, Chef Remy and You show, and Lightning McQueen’s Victory Lap through the American Waterfront are not to be missed! Pixar themed menus and special merchandise is also on sale throughout the park.

Last but not least, Duffy’s Heartwarming Days is taking place at Cape Cod in Tokyo DisneySea. Here you can find themed decorations and exclusive merchandise, along with Duffy, ShellieMay, Gelatoni, and StellaLou.