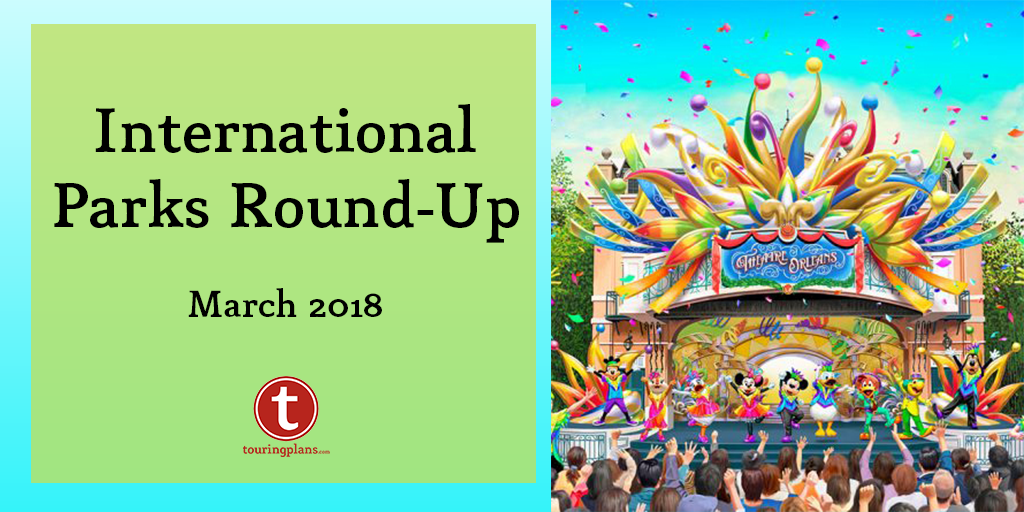 Welcome back for another International Parks Round-Up! Let’s SPRING (get it? Spring? I’ll go sit in the corner now…) into the March update, starting with Disneyland Paris.

Huge news dropped from Disneyland Paris last month, ironically on the same day that the February International Parks Round-Up article was published! A transformative, multi-year expansion is on the horizon, with an estimated budget of two billion euro.

The new development will add three areas to Walt Disney Studios Park, based on Marvel, Frozen, and Star Wars. In addition, a new lake will also be added to the park. It will act as a focal point for a variety of entertainment experiences, while also connecting the three new areas. The development will roll out in phases, starting in 2021.

Coming soon to Disneyland Paris is the “Pirates and Princesses Festival,” running from March 31 through May 31. This new offering is part of the 25th Anniversary celebration, and it will allow you to live a princess fairytale or set sail on a buccaneering pirate voyage! The interactive show “Disney Pirate or Princess: Make Your Choice!” offers a different story depending on whether or not you choose to be a pirate or princess. In addition, you can meet a variety of the Disney Princesses at the Princess Pavilion, or make friends with some salty sea-dogs in front of Plage de Pirates.

We’ve already discussed previously the Marvel Summer of Super Heroes coming to Disneyland Paris from June 10 to September 30, but this update would be remiss not to offer a quick reminder. Don’t forget that your favorite super heroes will star in a new live-action super-production featuring cutting-edge special effects and spectacular projections. Disneyland Paris is bringing a lot of excitement to the table over the next several years, so stay tuned to our monthly updates to keep up with all of it.

This spring and summer at Hong Kong Disneyland brings us the brand-new “Carnival of Stars,” a celebration of the new entertainment and shows premiering this year. First up is the “We Love Mickey” projection show. Each night it will transform the buildings along Main Street U.S.A., while paying tribute to Mickey’s major milestones.

Throughout Hong Kong Disneyland guests will be able to see over 100 Disney characters in a wide variety of shows, meet and greets, and parades. (The “Disney Friends Springtime Processional” alone has over 30 Disney characters!) In addition, the first ever Disney Pixar themed “Water Play Street Party” will help keep you cool while you take in the sights.

Next on the list is the Karibuni Marketplace. Opening on March 30, this Adventureland area immerses guests in the sights, sounds, and lively colors of Africa. Guests can also see characters from UP, The Jungle Book, The Lion King, and Aladdin in this magical marketplace.

Lastly, the brand new stage show “Moana: A Homecoming Celebration” will premiere in Adventureland this May. Moana is also currently meeting guests in the park, while anxiously awaiting her debut performance in May!

I’ve discussed in detail the upcoming Toy Story Land, opening in Shanghai Disneyland on April 26. Rather than rehash that, I’ll just remind you that the land will feature three new attractions: Slinky Dog Spin, Rex’s Racer, and Woody’s Round-Up.

In other Shanghai news, StellaLou has debuted! Guests can meet StellaLou, along with Duffy and his other friends, on Mickey Avenue. Additionally, Sweethearts Confectionary is currently offering exclusive new StellaLou merchandise. You can also find sweet treats celebrating StellaLou at Remy’s Patisserie and Il Paperino.

Additionally, guests can find a new show in front of the Whistle Stop Shop featuring Mickey, Minnie, Duffy, ShellieMay, Gelatoni, and StellaLou. The show is interactive, with StellaLou leading the crowd in a choreographed number. Her dance training sure comes in handy!

Lastly, if you’re in Shanghai April 13-22, make sure you check out the “Celebrate Earth Spring Carnival” in Disneytown. There will be a spring lawn party on the weekends, along with pop-up booths by the lakeshore. During this time you’ll also be able to take part in other interactive nature-based activities throughout Shanghai Disneyland.

It must be the calm before the storm over at Tokyo Disney Resort, as Disney Parks and Resorts has not made any TDR-related announcements in the past month. As we’ve covered in the past, Tokyo Disney Resort’s 35th Anniversary, the “Happiest Celebration,” kicks off on April 15. Here is a quick recap of what we’ll be seeing:

Are you planning on visiting any of the international parks in 2018? Have you been in the past? Please comment and share your thoughts and experiences on the Disney Parks throughout the world!