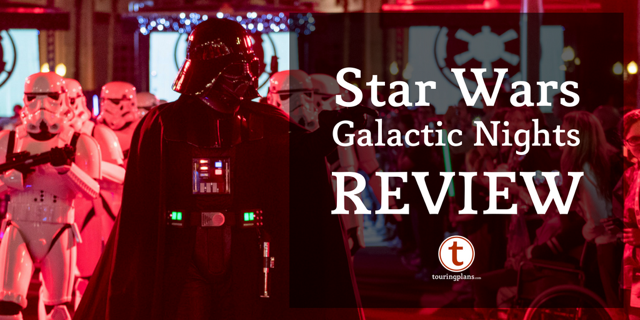 The event kicked off at 7:00 PM. Upon arrival, guests received a massive lanyard for a scavenger hunt and a passport booklet containing an event map, entertainment schedules, character locations, and even the menus. I saw the first of three showings for Inside Star Wars: Galaxy’s Edge was about to begin at the Indiana Jones Epic Stunt Spectacular Theater and decided to make it my first stop.

Inside Star Wars: Galaxy’s Edge has been offered at past Galactic Nights events and consists of a panel of Imagineers explaining, and revealing, a little about what’s coming to the park’s Star Wars-themed land opening next fall.

Reveals included the name of the village on Galaxy’s Edge, Black Spire Outpost, as well as photos of full-size AT-ATs and a Resistance ship. My favorite announcement of the night was that we’re getting a creature shop, featuring characters from print and animation. Yes, even Loth-cats! I was particularly intrigued by the hint that guests may be able to take creatures home with them. Is Galaxy’s Edge getting its own version of Pandora Banshees?

While these panels never reveal as much as we fans would like, and the same info is released online later on, getting to see and hear about if firsthand from actual Imagineers and before anyone else is a huge highlight.

After the panel, I headed to Animation Courtyard in front of Star Wars Launch Bay for DroidBuilders. These are fans who build replica droids that looked as if they just rolled off screen. Event attendees were welcome to take photos of them and with them too!

Next, I headed into Launch Bay Cargo to peruse the special event merchandise. The long lines and wall-to-wall crowds quickly changed my mind for the time, but I did get a look later on. Certain items were available in select stores; but honestly, there wasn’t much to choose from beyond a Galactic Nights pin, t-shirt, and water bottle.

All of the Hollywood Studios rides were operating throughout the night and with low waits! With few operating attractions and crazy long waits at the park these days, I couldn’t resist a few rides. I walked on Star Tours, where Stormtroopers were interacting with guests, and then Rock n’ Roller Coaster: Star Wars Edition!

Instead of Aerosmith’s “Sweet Emotion” and “Dream On,” a Star Wars soundtrack was blasting through the ride vehicle speakers. I also noticed still projections on the walls inside the ride building. Honestly, Rock n’ Roller Coaster: Star Wars Edition is rather weak compared to Disneyland’s Hyperspace Mountain. A different Star Wars soundtrack would’ve made a huge difference, and the projections needed to be moving as they only illuminated the track instead of adding to the ride.

After Rock n’ Roller Coaster, I moved next door to Sunset Showcase for themed photo backdrops and a character meet. These were scattered throughout the park. Inside Sunset Showcase, guests could pose with a Luggabeast, Rancor, and on the Jundland Wastes of Tatooine.

At this point, I was getting hungry. Most hard ticket events offer special treats; but sadly, nothing was free at Galactic Nights. Still, Galactic Nights managed to take event noshing to a whole new level with a vast selection of themed, and surprisingly exotic, dishes. It felt like a Star Wars food festival! There was vegan blue milk curry, ribeye steak puffs, and even soba noodle salad with a chili glazed deviled egg, just to name a few. My favorite item of the night? The mini eclair trio. These need to be at Hollywood Studios all the time.

There was so much to try that Disney (of course) offered a Galactic Tasting and Viewing Package for $30 per person including tax. With the package, guests could enjoy up to 5 food items plus special seating for Inside Star Wars: Galaxy’s Edge. The package was a surprisingly good deal I would take advantage of next time.

Some of the longest lines of the night were at the restaurants and snack stands offering these specialty food items, except at PizzaRizzo. There was no line at all to order; and the upstairs, as usual, was completely empty. After dinner, I checked out Stars of the Saga where Joonas Suotamo, who played Chewbacca in Solo: A Star Wars Story, was being interviewed on the stage in front of the Chinese Theater. There was plenty of room, and the huge screens guaranteed all could see. Suatamo clearly enjoys playing Chewbacca and was very entertaining. Fans were also allowed to ask questions.

Other entertainment offered included Jedi Training: Trials of the Temple, DJ Dance Parties, and Galactic Destinations. The DJ Dance Parties played a lot of current tunes with a few Star Wars character voices added in, which was a little odd. Hearing Backstreet Boys music at a Star Wars event was sort of like a bizarre dream…

For Galactic Destinations on Sunset Boulevard, screens and projection mapping was used on the Twilight Zone Tower of Terror to depict different locations in the Star Wars universe. The detail was incredible, yet difficult to see from a distance; apart from a few moments, it was sort of anti-climatic.

Now it wouldn’t be a hard ticket party without costumes! Much like Mickey’s Not-So-Scary Halloween Party and Mickey’s Very Merry Christmas Party, costumes are encouraged as long as they comply with Disney’s guidelines. Costumes and Disney Bounding is a huge part of the experience. I found that half the fun was people-watching!

Of course, characters were on hand for meet and greets; but honestly, I was expecting more. Chewbacca, Darth Vader, Jawas, Rey, and BB-8 have either met or are meeting in Launch Bay during normal park hours, so I didn’t get why this was special? A few rare characters would’ve been nice.

The night ended with a literal bang from Star Wars: A Galactic Spectacular,  the park’s nightly fireworks display. This showing, however, included a very short sequence from Solo: A Star Wars Story. I suspect this addition will be a permanent addition to the nightly show, if it isn’t already. Finally, when exiting the park for the night, Cast Members distributed free posters and trading cards to guests.

So is Star Wars: Galactic Nights worth it? As a regular attendee of the former Star Wars Weekends at Hollywood Studios, where I used to enjoy much of the same (if not more) of the experience for free, it’s tough forking over the cash for a ticket. It’s also more expensive than some Mickey’s Not-So-Scary Halloween Part and Mickey’s Very Merry Christmas Party ticket dates, and without the free Halloween candy, Christmas treats, and rare characters. Not to mention that some of the entertainment and shows can be experienced on a normal park day. On the other hand, Galactic Nights is a rare, fan-focused event with celebrities and Imagineers. It was also kind of a food festival due to the number of specialty food items, and the ability to walk on the park’s headlining attractions was a huge perk. So if you’re a hardcore Star Wars fan and/or want to experience Hollywood Studios attractions without insane lines, I’d say it’s worth experiencing once. While I had a blast, I believe Disney could’ve offered more entertainment and offerings exclusive to the event for the ticket price.