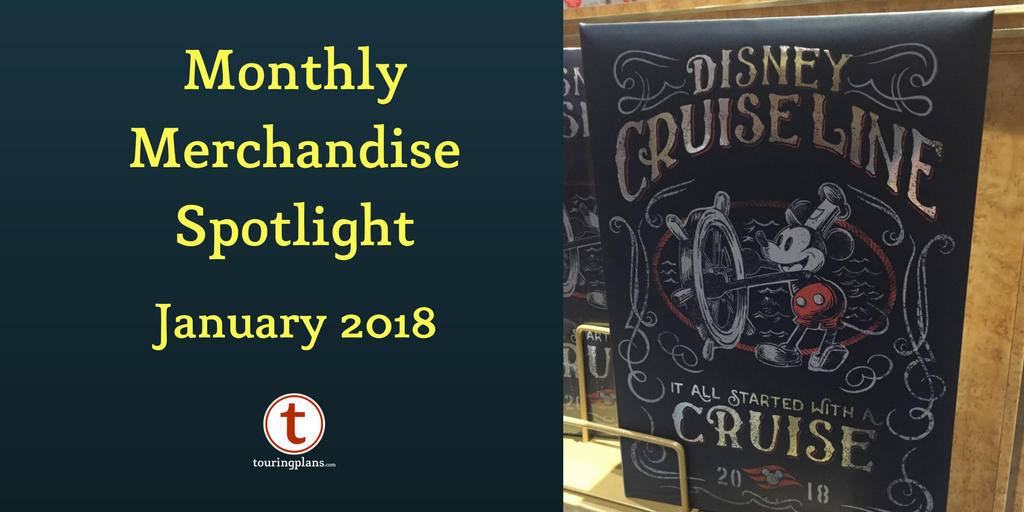 It’s that time again! Time to officially wear the “I Survived the Bomb Cyclone” shirts? The start of Girl Scout cookie sales? One third of the way to the next Disney Outlet Report? Well, yes, all of those. But it is also time for the Monthly Merchandise Spotlight, showing things that I think looked cool while I was out window shopping. Today’s spotlight shows merchandise on sale on Disney Cruise Line during my New Year’s cruise on the Disney Magic. Let’s dive on it. (Or is that really a bad turn of phrase when talking about being on a ship…?) I’m torn on these shirts–I love the Donald one, but the Mickey one seems a little cringe-worthy for me. What do you think? Either of these something you’d wear? It’s nice to see some non-Fab-5 shirts out and about. I’m also torn on these, though. Somehow I don’t think I’m the target demographic for them. Are these a purchase or pass? (All of those shirts are in the $25 range, if that helps with the decision.) I did spot this sleep shirt that I thought was pretty cute. At $35, I almost bought it, but passed for now. Maybe this summer…? For the kids, I thought this emoji-themed shirt was pretty cute. My daughter wasn’t as big of a fan, so on the rack it stayed. (Price for this was also $25.) If I had a boy, I probably would make him dress up in this Captain Mickey jacket. Seriously, how cute is that? It was a painful $65, however. But can you put a price on cute? (Apparently you can–$65, child not included.) Firing up the wayback machine, back in the 80s they had these pastel teal/purple/pink shirts with rows of Mickey heads and a splatter paint type of motif going on. They were everywhere in the parks. I adored that design and thought it would never go away. But, sadly, it did. Now everywhere you go, there’s these kind of shirts with the name of a location in puffy paint across the back. I actually like them. These shirts were $60. I don’t like them $60, but since I got some WDW-style ones at the Outlets recently, I’ll keep my eyes open for these to show up there someday. Years from now, people will talk fondly about these shirts. You’ll see. The 2018 merchandise has started to appear. First up, another “interesting” shirt theme. I like Mickey, don’t get me wrong — I’m not sure I’d go so far to say I’m in love with him, though. Maybe that’s just me? How about a glass ornament to commemorate your cruise? Or, depending on who handles your luggage, how about a pile of glass shards? Scrapbooking supplies are always available, but I think I like this photo album more. It does beg the question, however, does anyone still use photo albums? This one was $25.

Can we actually call these shot glasses instead of toothpick holders because we’re on a Disney cruise? If that’s your collectible of choice, the 2018 models are out. I’m always asked about Tsum Tums. So, for Derek Burgan, here you go — no changes in the Tsum market, with just the DCL-specific Captain Mickey, Cruise Director Minnie, and Pirate Stitch (and a few “regular Mickey” thrown in). Another request are Dooney bags. There’s a few different designs available, so I picked two of the better ones. First, this character-DCL mashup. And second, a more traditional-looking bag with plenty of DCL charm. In typical Dooney style, they’ll run you $250+ each. Remember when the Sphero BB8 was the hot thing? Now you can get R2-D2 as well, at a decent discount. One nice item that has been available on DCL for quite some time are the butter knives from Animator’s Palate. The price is steep, but they’re really cute. Like many people, I’m doing the New Year’s resolution of trying to be more healthy, so I almost bought one of these glass water bottles. I’m afraid that they would break, though. For anyone who has these, does the rubber around it really help it not shatter or do you still have to be very careful? At $20, I’d want to make sure it lasts more than 20 minutes…. My go-to when it comes to drinkware is Tervis. I’ll freely admit to being a brand snob when it comes to their product because it holds up remarkably well. And the one time I managed to shatter a Tervis cup, I sent them the pieces and they sent me a voucher for a new cup–just like that. So this month, I’ll wrap up the report with some of the great variety of Tervis wine glasses and tumblers that you can find on DCL. That’s it for this week’s look at merchandise from Disney. Where would you like me to go shopping next week? Let me know in the comments.