In the final weeks of the 2014 summer season, Walt Disney World experimented with some new queuing procedures at popular attractions and eateries, with somewhat controversial results. As the peak crowds have departed, so have most of those tests, so I recently headed into the Magic Kingdom for an early morning queue update on operations at Princess Fairytale Hall’s Frozen Meet & Greet and Be Our Guest restaurant.

My first goal was to arrive well before rope drop, in order to see how swiftly the infamously long line to meet Anna and Elsa was moving first thing in the morning. Unfortunately, I forgot that the monorail is currently opening late due to maintenance upgrades, which made the trip from the TTC to the park a bit more cumbersome than usual. 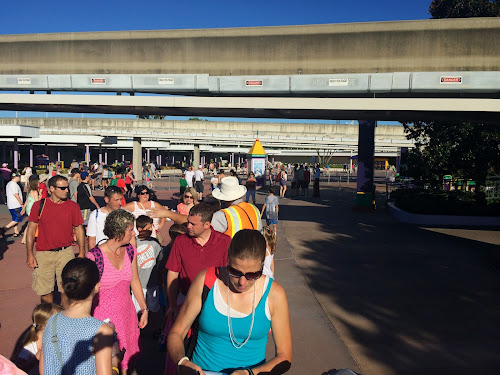 I opted for the bus transportation option over the overburdened ferry, which turned out to not be a bad choice. The busses loaded about as quickly as could be expected, with a continuous line of vehicles pulling up to service the sizable crowd, and before too long we had arrived at the recently expanded Magic Kingdom bus loop. 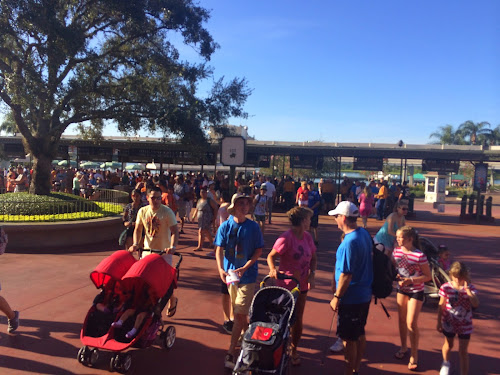 Even with a sizable crowd at the park’s front gates, I still made inside and up Main Street before the park’s official opening time, and found Fantasyland already filling up with guests, many of who were staking out Peter Pan’s Flight because Seven Dwarfs Mine Train was experiencing technical difficulties. 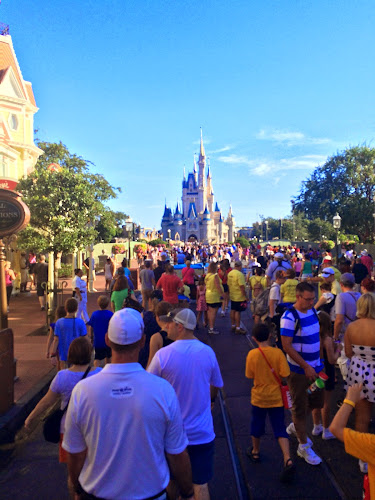 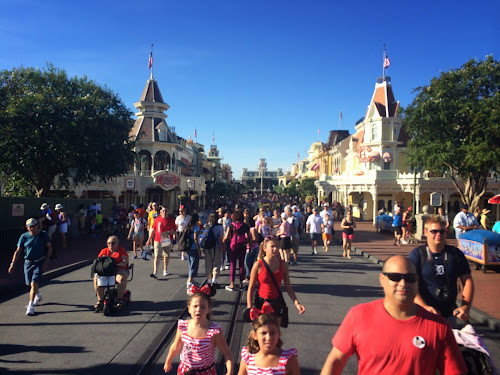 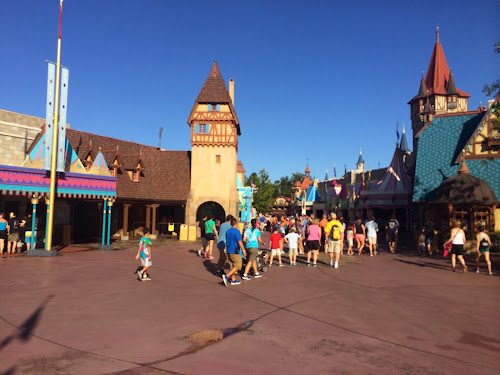 In order to approach Princess Fairytale Hall, I had to travel clockwise around the carousel, as cast members were blocking the more direct route. 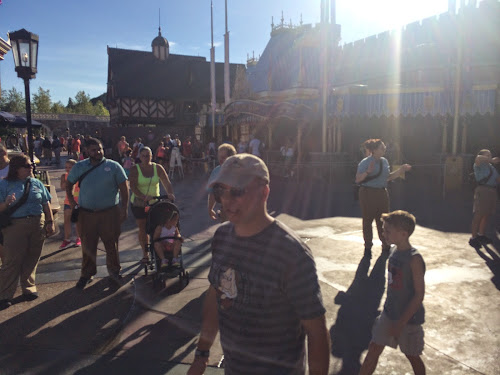 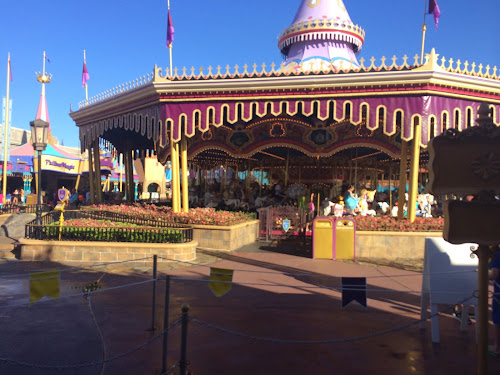 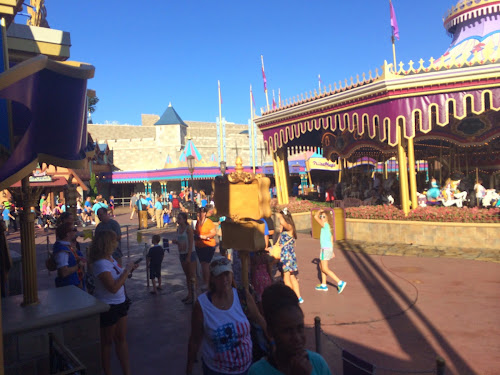 When I joined the queue to meet Anna and Elsa, it was still a few minutes before park opening, and the posted wait was already 90 minutes. 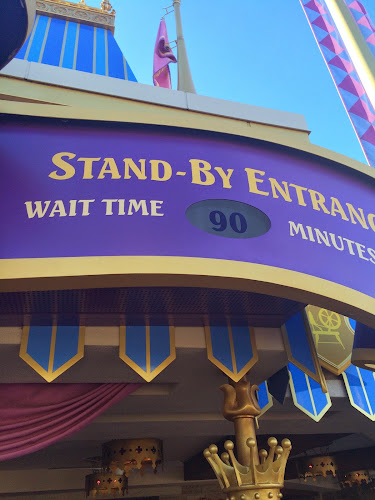 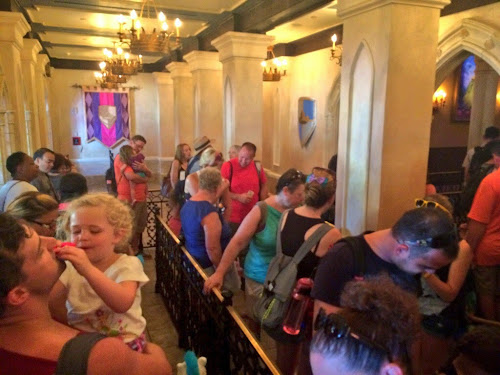 The queue moved more quickly than I expected, and before long I was inside the ornate lobby. 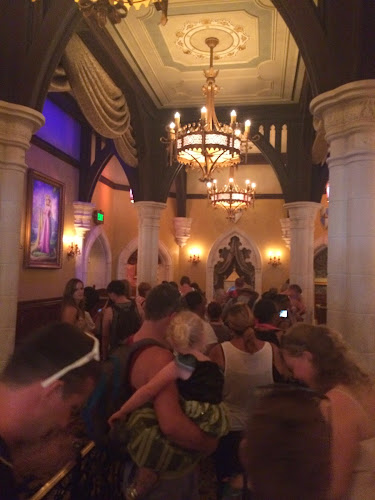 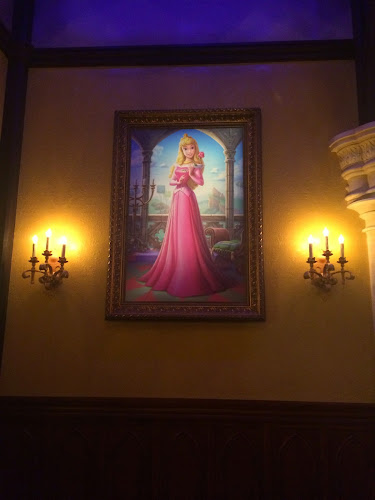 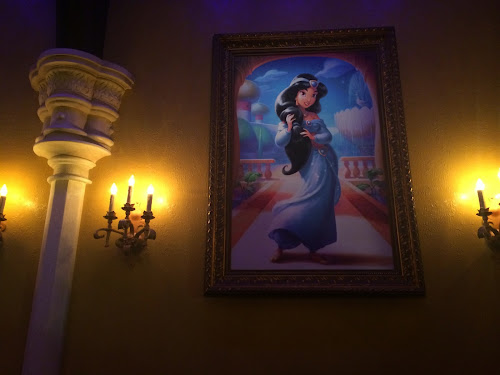 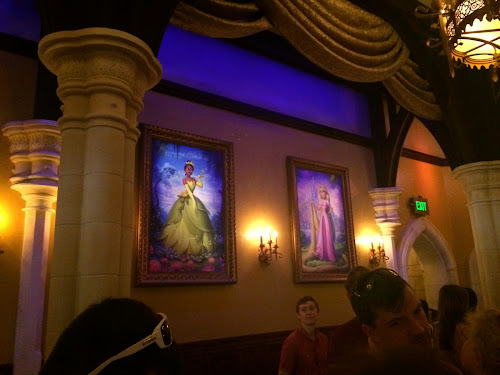 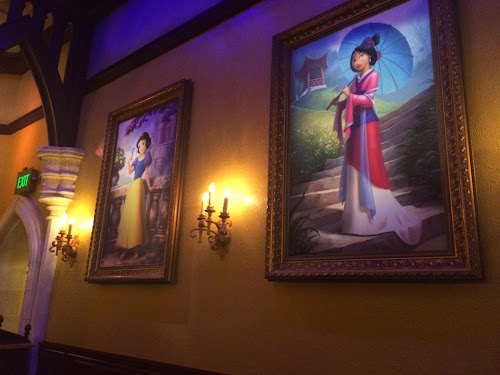 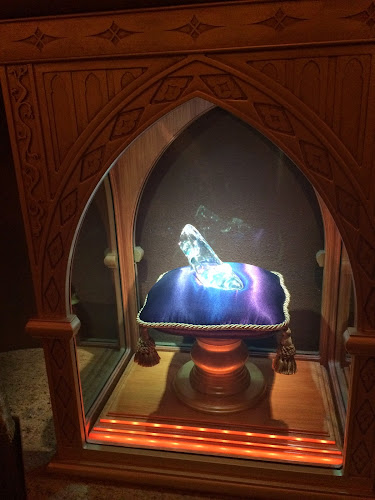 Incidentally, during my wait I never saw a single person get in the other line to meet non-Frozen princesses. Since Frozen is still so hot, perhaps Disney should hire another pair of ice sisters and install them in the other meeting room. 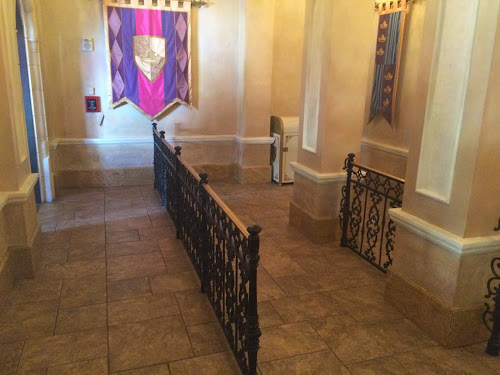 Upon entering the greeting area, I noted that Anna and Elsa are now posing on opposite sides of the room, instead of as a pair. On my previous visit, shortly after Anna and Elsa arrived at the Magic Kingdom, they were positioned together, with a third princess on the other side of the room. The new setup seemed to move the line a bit more smoothly, but denies guests to the change to get both girls in the same shot. 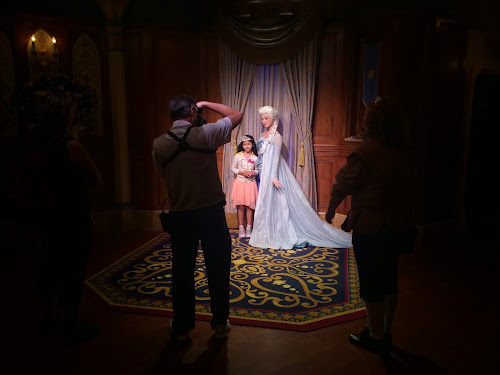 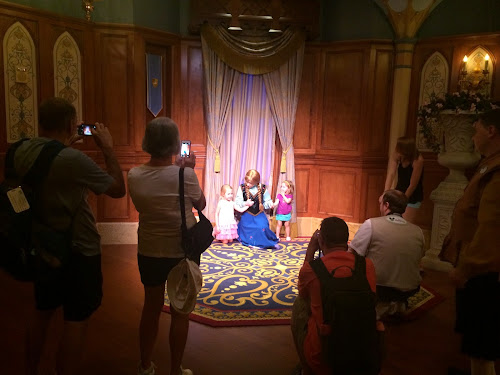 In order not to hold up the guests behind me, I declined the PhotoPass posing and just snapped some quick selfies before scooting out the door. Both of the sisters seemed quite intrigued by my Abominable Snowman t-shirt, which they suspected was a relative of Marshmallow. 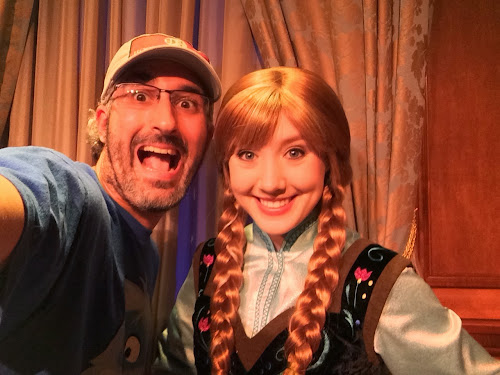 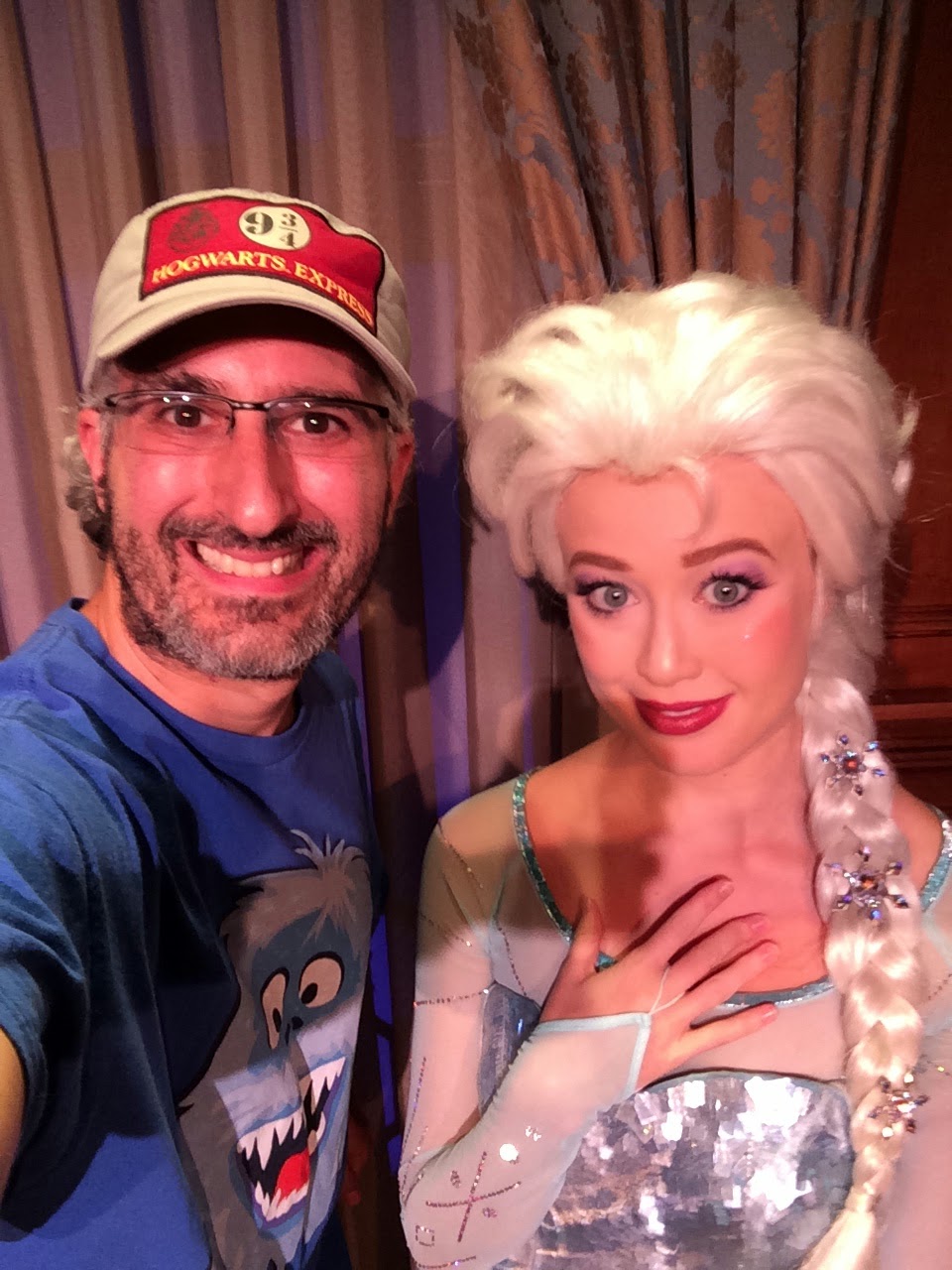 In the end, my total wait time for the Frozen Meet & greet was only 45 minutes, about half of what was posted when I arrived. 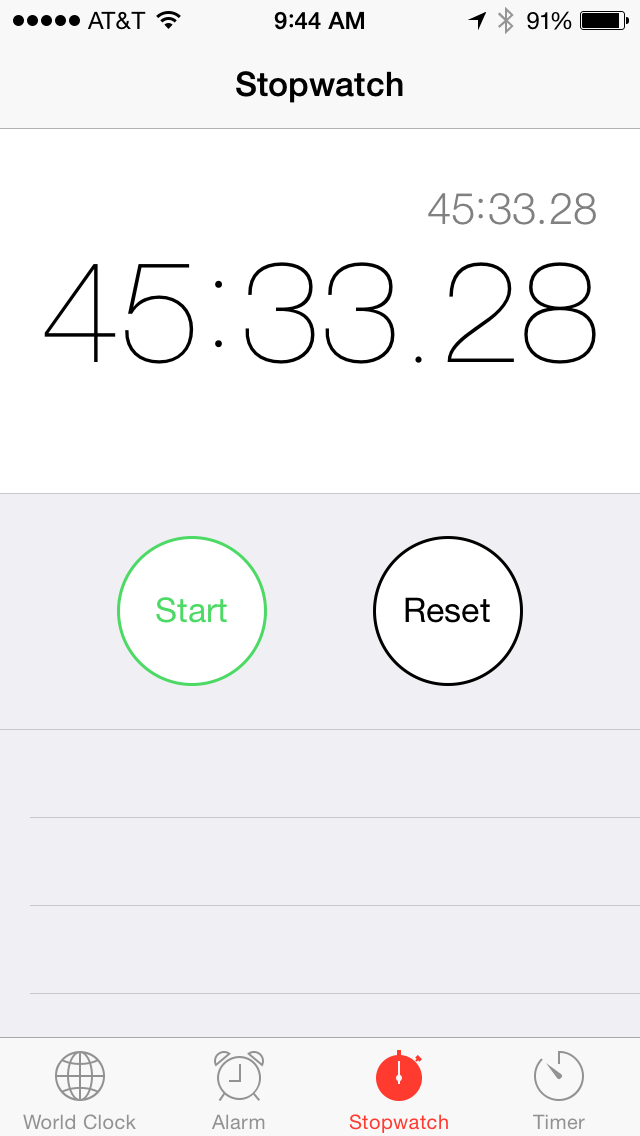 By the time I exited the hall, the post wait time had climbed to 120 minutes. In previous weeks, cast members were cutting off the the standby queue shortly after opening, and handing out paper return time tickets much like the old FastPasses. That experiment has apparently ended, as there were no restrictions on new guests joining the standby line. 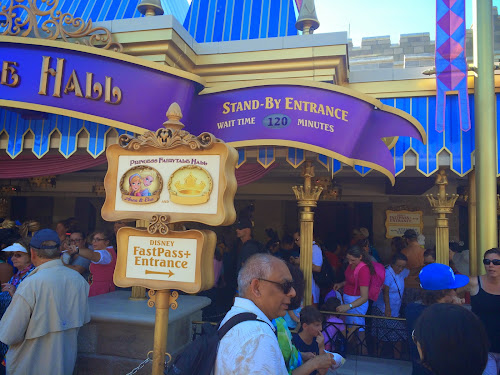 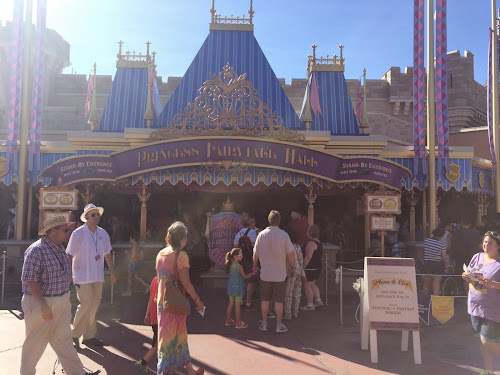 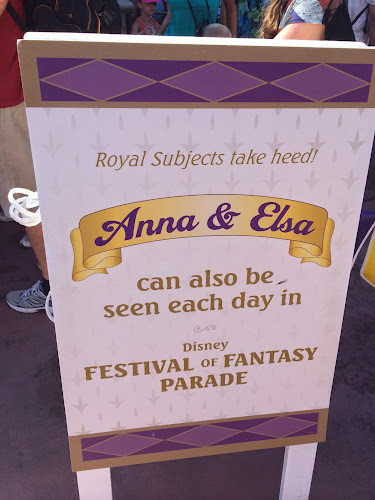 Be Our Guest Lunch Queue Update

It wasn’t even 10 a.m. as I left the Frozen meet & greet, but there was already a substantial line of guests on the bridge to Beast’s castle waiting to eat lunch inside Be Our Guest restaurant. I was in the mood for a croque monsieur, but not yet hungry, so I decided to check back in a couple hours. 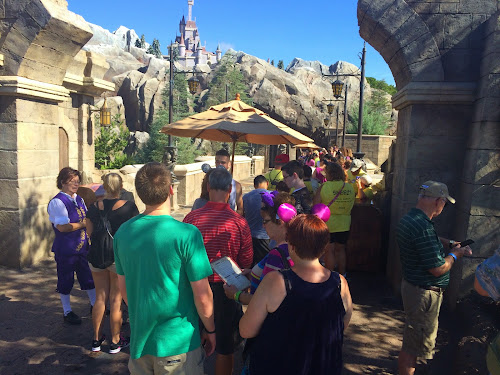 By the time I returned, I was surprised to not see the usual queue stretching down the street towards Gaston’s Tavern. Then I noticed this sign, declaring that the restaurant had “reached capacity” for the day’s entire lunch service. 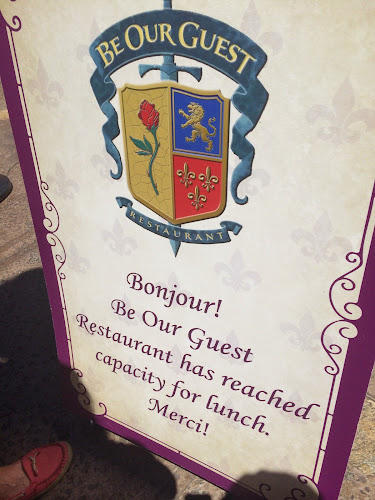 There was no option to wait in line, nor to receive a paper return time ticket, as had been distributed earlier in the summer. I was advised by a cast member that I could have made a FastPass+ reservation for lunch, but that is only available to on-site hotel guests, not local annual passholders like myself. 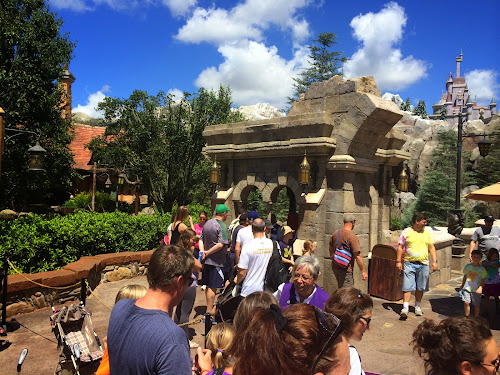 I also noticed a cast member with a clipboard outside the restaurant taking same-day reservations for dinner. Be Our Guest is one of the most difficult restaurants at WDW to get dinner reservations for, but a number of cancellations may be available on any given day, and may be filled in person during the morning and afternoon on a first-come/first-served basis. 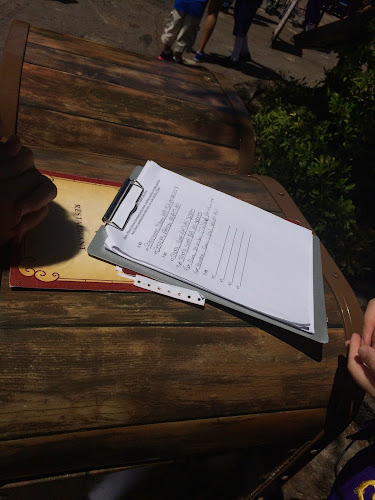 Unfortunately, the only tables available (at least on the day I visited) were four-tops, and the cast member would only accept a reservation if you said there were that many people in your party. I don’t know what would have happened if I had lied and showed up later alone. It understandable that Disney wants to maximize revenue, but as a single visitor I felt somewhat shut out.

What do you think of the current queue conditions for the Frozen Meet & Greet and Be Our Guest Lunch? Leave your recent experiences in the comments below!

16 thoughts on “Observations from Magic Kingdom: Frozen Meet & Greet and Be Our Guest Lunch Queue Updates”