Okay, I admit it: I’m spoiled.

Usually when people talk about Halloween Horror Nights at Universal Studios Florida the first thing they mention (after the gore and booze) is the huge lines. But this year, I lucked out. So far, I’ve been on an “RIP” guided tour, attended during exclusive annual passholder hours and “Stay & Scream” early entry periods, and made full use of my “Rush of Fear” and “Frequent Fear” unlimited Express passes. As a result, I’ve been able to experience all eight of the event’s haunted houses at least five times each so far this season, with an average wait time of under 15 minutes.

But last Friday (10/4/2013), I wanted to experience how “the other half” lives and see the event from the perspective of an ordinary guest. Is it possible to arrive at the front gate on a moderately crowded night without any special line-cutting passes and still have a good time at HHN? Let’s find out!

In my Halloween Horror Nights touring plans, I strongly suggest arriving at the park at least an hour before the event starts. But for the sake of this experiment, I decided to ignore my own advice and see what would happen. I parked my car in Universal’s ginormous garage shortly after 5:30 p.m. (remember, Passholder discounts on valet parking are not valid during event nights, but you can still park in the Preferred section for free if you have a Premier pass) and arrived at Universal Studios Florida’s entrance arches around 5:45.

While the event does not officially begin until 6:30 PM each evening, you can expect the front gates to open by 6. There was already a sizable crowd in front of the turnstiles when I arrived, but I was able to make my way towards the front with relative ease. 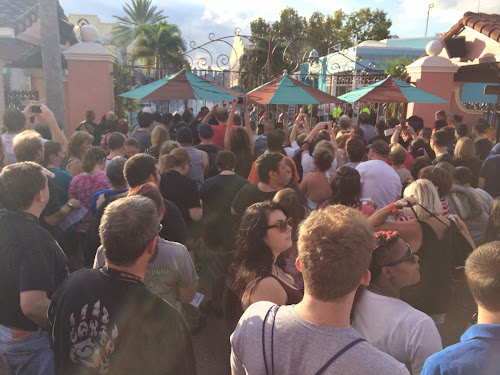 Shortly before the gates open each evening, a female “survivor” appears on the balcony above the ticket booths to warn guests of the approaching “walkers” in a brief “opening moment” to kick off the evening. 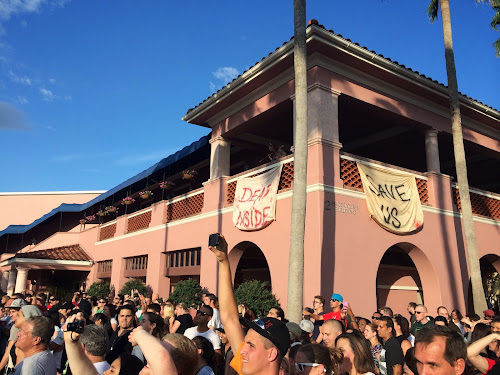 The crowd surged through the gates, immediately heading straight towards the Cabin in the Woods maze, which instantly amassed a 30 minute queue. 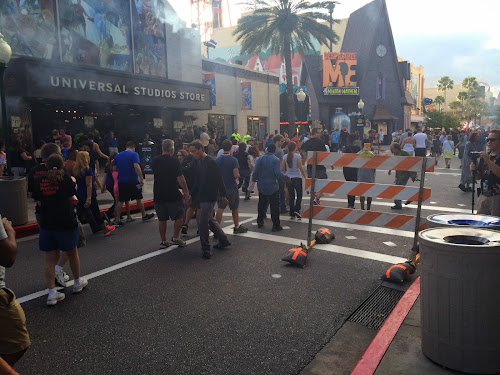 Instead, I headed right towards the Walking Dead maze in Kidzone, knowing that most Stay and Scream guests would have already made it through there by now.

Next up was La Lorona, which also had a non-existent wait, along with the most frightening façade of any queue at Halloween Horror Nights:

By 6:15 PM I had experienced two of the park’s mazes. I made a quick loop around the lake on my way back to the front, snapping some Diagon Alley construction photos along the way: 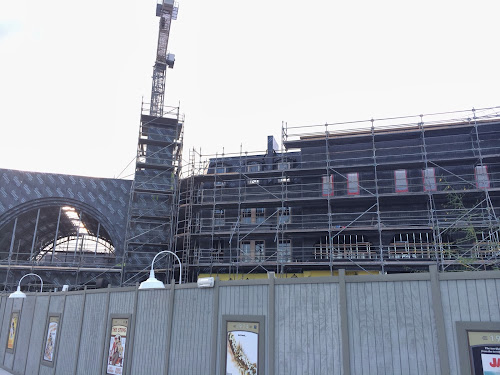 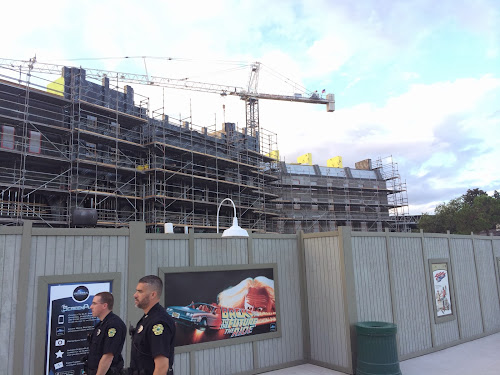 There, I found the American Werewolf in London maze with only a 10 minute posted standby wait (the actual wait was under 7).

On the way into the maze you can spot the Hogwarts Express trains, which I’m told should be loaded on the track for testing in just a few short weeks 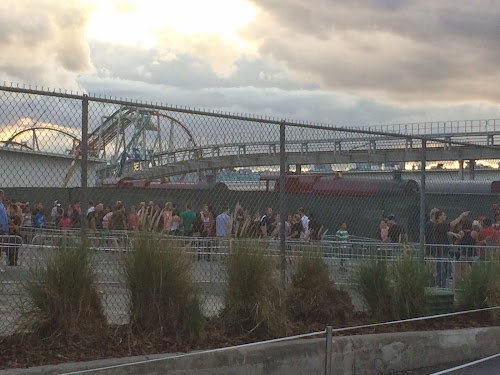 By 6:45, queues for houses near the front of the park were becoming serious… 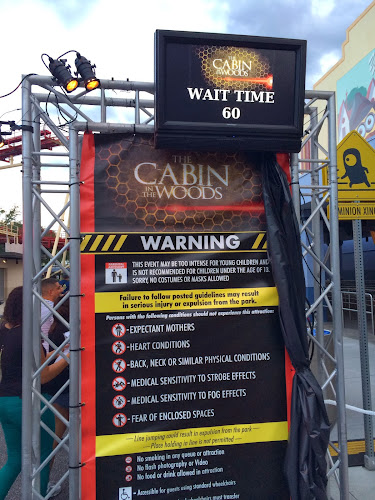 So I headed to the back of the park to hit Afterlife.

By the way, the entire Simpsons area is open during HHN, including the new Kang & Kodos spinner ride, though it had few takers. 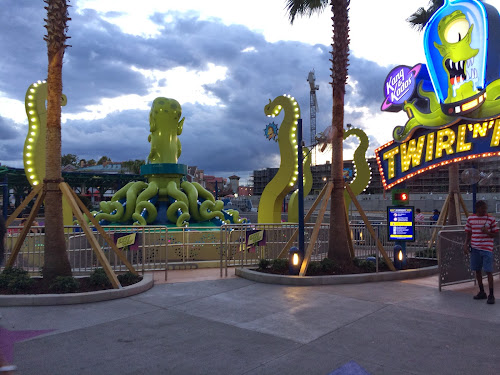 Unfortunately, my slight scenic detour meant that by the time I arrived Afterlife it already had a 15 minute posted standby wait, which turned out to be closer to 20.

Afterlife is slowly growing on me, but I’m not the biggest fan of 3-D blacklight mazes, and I was much more impressed by what Bush Gardens did with the technique this year at their event. 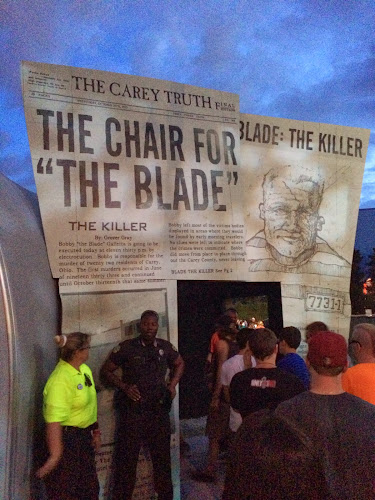 I didn’t emerge from Afterlife until 7:30 which meant I was too late to catch the first showing of Bill and Ted’s Excellent Halloween Adventure. If the show is a priority for you, make sure you see the first or final performances of the evening (unless you feel like lining up 45 minutes to an hour ahead of time). 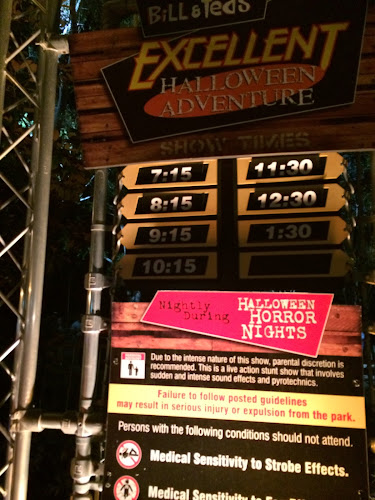 Instead, I headed over to San Francisco to catch the evening’s first Rocky Horror Picture Show tribute performance with a rather lackluster half-empty crowd. 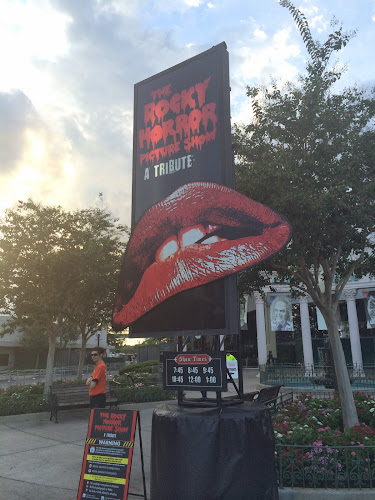 The cast this year is solid, and some of the vocal arrangements improved since the last time this show appeared at HHN. But as a long-time RHPS fan I’m still disappointed by clumsy editing and half-hearted audience participation. 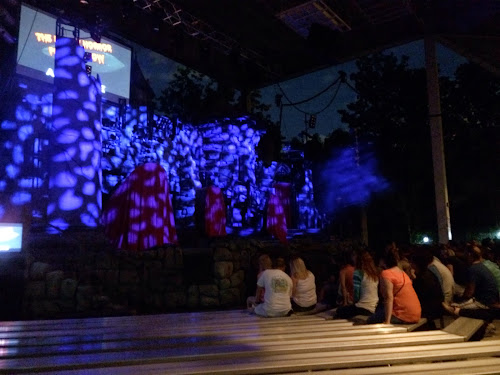 Since I’ve seen how the show ends approximately 300+ times, I slipped out long before the final “Science Fiction Double Feature Reprise.” 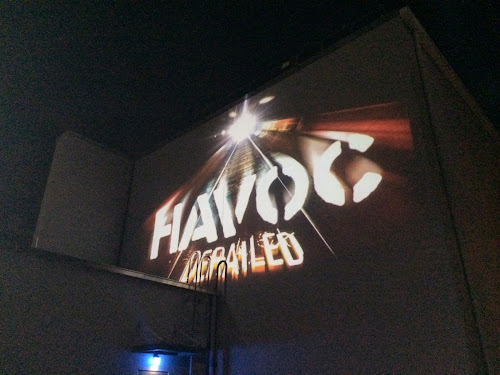 Exiting the show, I stepped into line for Havoc: Derailed and finally got to watch the clever video preshow (featuring a few familiar faces from Orlando’s theater scene) while waiting approximately 17 minutes to enter. 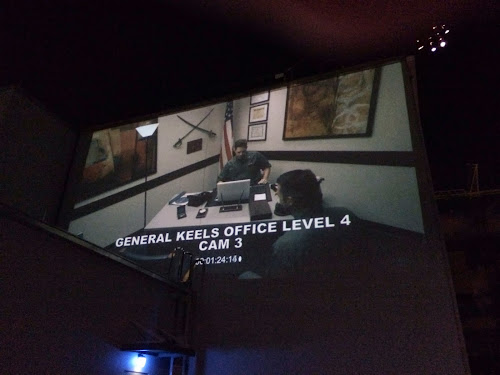 Havoc is still my most disappointing maze of this year (the cast is aggressive, but the environment is repetitive and unimaginative) but it did help me work up an appetite. So after a quick lap around the park to check posted wait times — Evil Dead and Cabin in the Woods were both over 70 minutes by 8:30 — I stopped into Monsters Cafe for dinner.

I was disappointed to note that the restaurant has replaced its appropriately-themed video clips from classic monster movies with random film excerpts (including Apollo 13 and Smokey & the Bandit) dubbed into different languages. Perhaps recycled from the extinct International Food & Film eatery?

Exiting the restaurant, I took a look at the former Amity Island carnival games that have been temporarily installed along Music Plaza. I’m far from a fan of these upcharge carnie hustles, but at least Universal made a minimal effort to create themed signage for them. 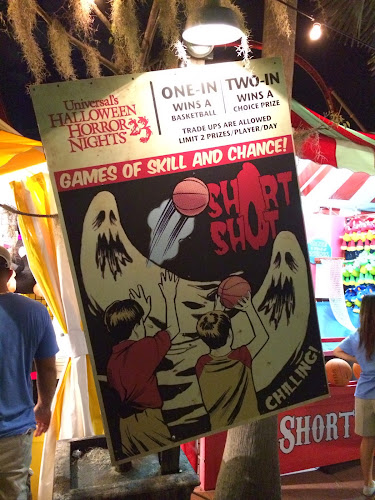 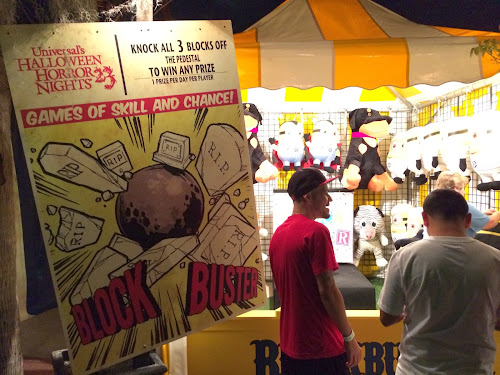 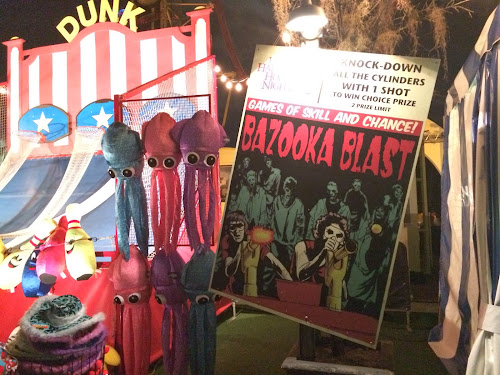 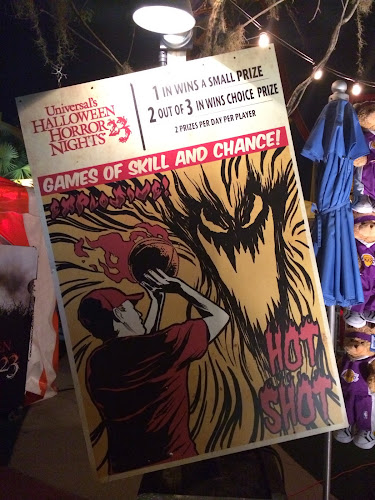 By 9 p.m., wait times for the top mazes ranged from 75 to 90 minutes, but I had already experienced 5 houses and one show without waiting over 20 minutes for anything. At this point, I’d advise non-Express visitors to check out the open-air scarezones or rides (which usually have short waits), or even leave the park and hang out in CityWalk until the queues start to recede. 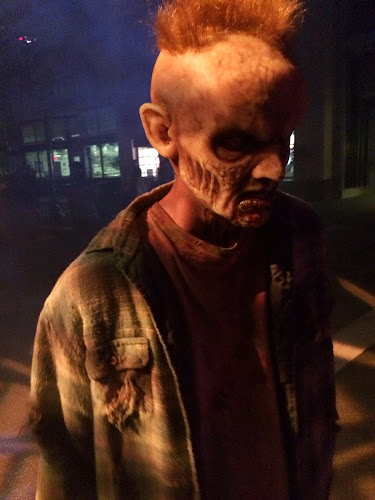 I decided to take this time to test the utility of my Express pass. In a word, it proved invaluable. On peak nights, you can expect the Express wait to be approximately 25% to 33% of the posted standby wait. I hit the jackpot, however, and made it through the queues for both Cabin in the Woods (75 min posted standby) and Resident Evil (45 min posted standby) in under 5 minutes each.

I also spent an hour collecting RFID scans for Legendary Truth, the free “alternate reality” game for Frequent Fear Passholders. Players activate hidden sensors around the park to earn points and badges for their team; visit hhn23experience.com to get started.

It’s past 10pm and the party is just getting started, judging by the thirsty guests around Duff Brewery and Moe’s Tavern.

At this point it was 10:45pm, and I had visited 7 of the 8 mazes. I used my Express pass to experience Evil Dead, whose posted wait had alread dropped from 70 minutes to 50. If I had stuck around later, I could have easily experienced the last 3 mazes without my Express pass, as wait times tend to diminish rapidly after midnight.

Unfortunately, I was exhausted, and had an early morning the next day, so I decided to cut my experiment slightly short, shortly after 11 p.m.. But I feel confident I’ve demonstrated that it is possible to see the entire event without Express in one evening (excepting peak Saturdays) as long as you arrive early and tour efficiently.

One final observation: on the way back to my car, I noticed that the Endangered Species store in CityWalk is now under demolition. 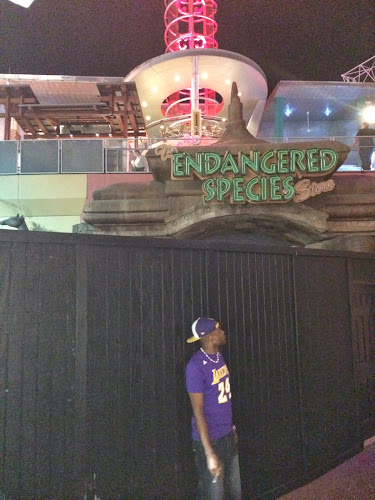 Expect it to reemerge as a Starbucks (eventually replacing the one upstairs) in the coming months. 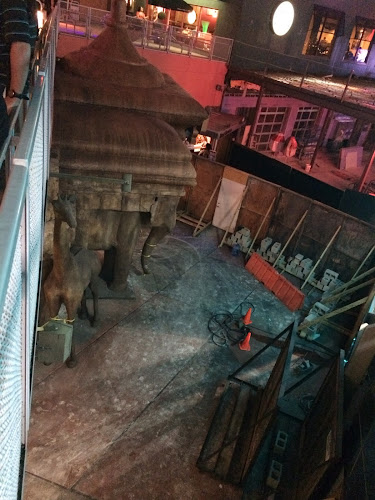 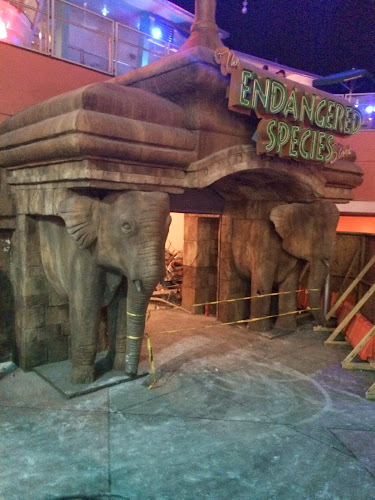 Have you visited HHN 23 yet? Leave your observations in the comments below!