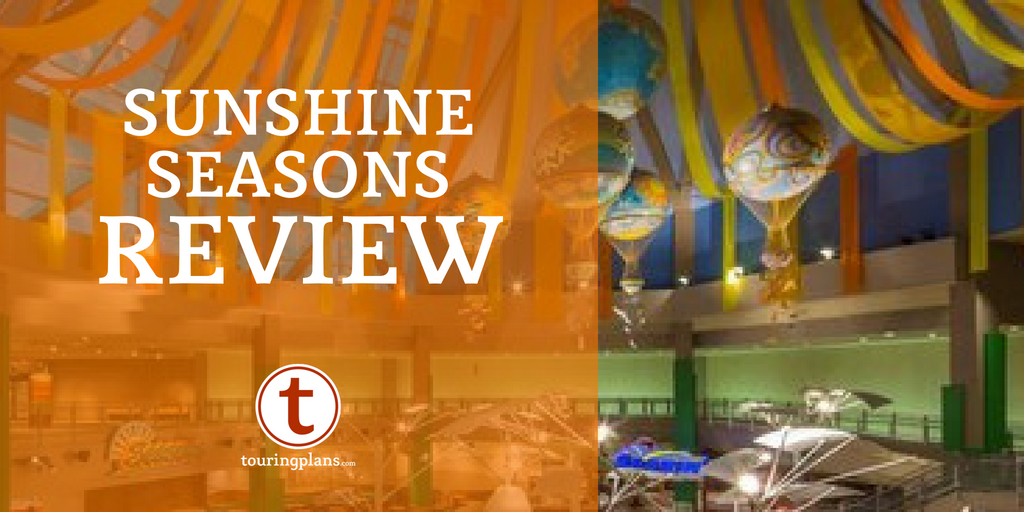 Today, we’re looking at Sunshine Seasons, a perennial favorite among readers in The Land pavilion in Epcot. Planning meals, especially for a diverse party, can be a challenge in Epcot. Someone wants something more than burgers and fries. Another person wants vegetarian/vegan options. Still another person wants a meat and potatoes kind of meal. And of course your child is on a day when all they want to eat is mac ‘n’ cheese. That’s why I often recommend Sunshine Seasons for families visiting Epcot. Add to it the benefits of ample seating space and air conditioning, plus reasonable (for Disney) prices, and it is a solid dining choice.

Sunshine Seasons has a limited breakfast menu, but the primary reason to visit is lunch or dinner offerings. The setup is somewhat like a food court–several windows offer different types of food, there’s a grab and go section for limited pre-packaged food, there’s a bakery section for your sweet tooth, and kids meals are found at a dedicated spot. Once people have picked up their food, drinks, desserts, or snacks, they pay at registers and can sit in one of four season-themed areas.

The menu here offers a decent variety divided up into several “Shops”. There’s the Grill Shop, serving options like BBQ pork loin with mashed potatoes, chicken with yellow rice and beans, or salmon with cheesy grits and succotash. The Sandwich Shop offers spicy fish tacos, a vegan flatbread, and a turkey club sandwich. The Salad and Soup Shop offers a standard (but tasty) Caesar salad and a more adventurous “power salad” with kale, quinoa, and goat cheese. Both salads come with chicken, but can be served without. There are also soups, such as black bean soup or chicken chowder. The Asian Shop offers items such as Mongolian beef, sweet & sour chicken, and a vegan chik’n korma. Prices for entrees range from $10-14.

The kids aren’t forgotten at this location either, with the menu including a mix of healthier and less healthy options. Healthier options include grilled salmon, chicken drumstick and a chicken wrap sandwich, all of which an come with green beans, mashed potatoes, or rice  as a side. There’s also pasta with a meatball, grilled cheese, and mac ‘n’ cheese for the more “selective” kid palates. Other standard sides, like applesauce and carrots, are available. It is worth noting that you won’t find chicken nuggets or French fries as a side here, however. (And from this mom’s perspective, that’s a welcome sight!) Kids meals, which include an entrée, two sides, and a kid’s drink (fountain drink, small bottle of water, or kid’s milk) range from $6-8.

The grab ‘n’ go section includes items like a fruit and cheese plate, side salads, wraps, and a couple prepackaged entrée salads. The selection can vary throughout the day, and by evenings, pickings can be slim. Unless you’re trying to grab something to go on the way out of the park, or just want a light snack like the fruit and cheese plate, there’s nothing here worth noting.

Your standard array of fountain beverages, tea, coffee, and cocoa are available as a self-serve option, which means that you can go back for refills. There’s also a limited selection of beer and wine (sadly, not refillable of course).

In the end, it’s all about the food. During our visits, we’ve sampled just about everything. From the grill station, the rotisserie chicken is a solid bet as long as you like the oak flavor of the grill, and is large enough that you can split it for two people looking for a light meal. The pork is a surprisingly heavy meal that is delicious, but may be something you want to skip if your plans include an afternoon walking World Showcase. For the salads, the Caesar salad is good, but because it is made with dressing, it can be a bit soggy. (Ask for the dressing on the side–you may have to wait a few minutes to have them prepare it, but it’s worth it.) When they have it, the cold tuna noodle salad is wonderful, with a lightly seared tuna on a flavorful bed of noodles. The power salad is also a good option that makes you feel like you’re eating healthy at Walt Disney World. The sandwiches are the weakest of the offerings, and be warned that the spicy fish tacos are as advertised–spicy.

For our most recent visit, we sampled some offerings from the Asian station. I went with the sweet and sour chicken. If you’re expecting chunks of deep fried chicken in a glow-in-the-dark orange sauce, you will be surprised by this dish. No fried foods here–instead, it’s chicken, red and green peppers, and chunks of pineapple in a tangy sauce. It comes served with an over-abundance of rice, and is a decent portion for its price ($12). As any Central Floridian can attest, I’ve paid more for lower-quality Chinese food off property.

Overall, the dish was a wonderful blend of flavors. I’m not a fan of peppers, but they seemed to be in the dish for color and not for flavor–you couldn’t taste them. The sauce was more tangy than sweet, with the pineapple providing the sweetness for the dish. The chicken was well prepared, and there was enough in the dish to make me feel that I got my money’s worth. The only negative about the dish was the rice. We were dining around 7 pm, well after the dinner crowds, and so you could tell that the rice had been sitting for a while. Had the dish had more sauce, it would have been fine, but the dish isn’t swimming in sauce. Next time, I’d likely ask if they could put a bit of sauce on the rice, though.

My husband got the vegan korma, which comes with Gardein meatless chik’n and vegetables, including carrots, cauliflower, and peas. Due to my allergies, most vegan dishes (including this one) are off limits for me, which is a shame because I do love a good korma. The chik’n has a texture that you’d expect from meat-based chicken in this kind of preparation, and because the sauce is the flavor driver in this dish, unless you told someone it wasn’t meat-based chicken, you wouldn’t automatically notice. Where you would notice that the dish was vegan was the korma sauce. With no cream or butter, the sauce wasn’t as rich and creamy as a typical Indian dish–our guess is that it was made with coconut milk. It had all the right flavors, though, and was mild enough for any palate. What would be nice to see is this changed to an all-veggie korma with larger chunks of cauliflower and maybe a few other vegetables from the greenhouse included. But overall, if you’re looking for a vegan dish that goes beyond “one salad, no creamy dressing”, this will be a very satisfying meal.

In recent months, Disney has been moving towards a new recipe for their mac ‘n’ cheese. Having had it a few times at a few locations, this “white mac with corkscrew pasta” is a huge disappointment that tastes gritty and lacks any sort of cheese flavor. Basically, if you made mac ‘n’ cheese with a jar of Elmer’s paste, that’s what you’d get. The places where you can get the old-style mac are few and far between. At least for now, Sunshine Seasons still serves the original golden gooey goodness. Adults don’t have to feel left out either–you can order a large bowl of it from the kid’s station, too. A favorite entrée with her favorite sides? My daughter gives this meal her seal of approval.

What would a meal be without dessert? The dessert section at Sunshine Seasons is fairly extensive, with offerings for everyone. I almost bought this cupcake just for the appearance–seriously, this is one of the most beautiful cupcakes I’ve seen.

Instead, we went with two other options. I’ve heard so much about the rose gold cupcake, I figured I’d want to try it. And my daughter lives for crème brulee, so her choice was easy. I assume the crème brulee was delicious–within moments of this photo, it was completely devoured and the dish was almost licked clean. (In her words, “Sorry mom, but it was soooo good.”) I have a love-hate relationship with Disney cupcakes. I really want to love them, but I find that the cake is always a bit dry for my taste. That was the case with this one as well. The other problem I had with it was that there was too much frosting for my preference–we ended up tossing a plate with globs of leftover frosting. The flavors themselves were good. From the allergy warnings, the cupcake had hazelnut in it, but I didn’t really taste that. If you like Disney-style cupcakes, you’ll probably enjoy it. If you don’t, go with the crème brulee. I’ve heard it’s good.

Sunshine Seasons is located in The Land pavilion in Epcot on the first floor between the entrances for Living with the Land and Soarin’. It is open daily from park open to close, and accepts the Disney Dining Plan for quick service credits and snack credits. According to Disney’s web site and based on our most recent visit, Mobile Ordering was not available, however there is signage up that would indicate it will be available at some time (possibly during peak seasons). Overall, readers gave Sunshine Seasons a 92% approval rating.

Is Sunshine Seasons a must-do for your visit? What’s your favorite item? Let us know in the comments.

6 thoughts on “Sunshine Seasons: A Solid Bet for a Quick Meal”