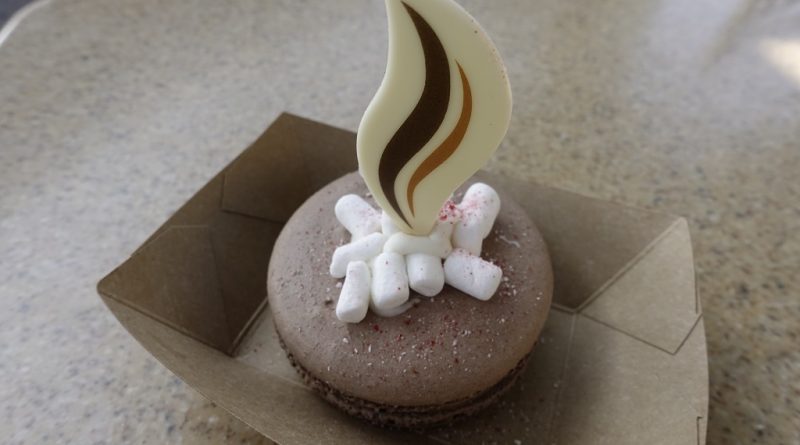 I hope you spent the last year stretching out your stomach because there’s a lot of wonderful new items to try at this year’s Festival of Holidays at Disney California Adventure. Some tasty items are returning from previous years as well. No more wasting time, let’s get into the best food items at Disney California Adventure’s Festival of Holidays 2018.

The Best of the Best Tamales are one of my favorite food items. I’ve probably had thousands of them in my 35 years on this earth, and surprisingly this was up there in terms of taste. It was like a Thanksgiving dinner, but in a tamale. The turkey was perfectly cooked, the sauce on top was not too thick or rich, and the tamale itself was just right (not dry at all). I’ll just get this out of the way now, the price is high. Entrees are even more expensive than last year. Thankfully the serving sizes on most items is bigger than in previous years. Anyway, besides the price this is one of the best items available at Festival of Holidays 2018. A returning favorite from 2017. Last year I said that turkey has no right to be this good, and I still stand by that statement. It’s like a spicy chicken sandwich from Chic-fil-A, but instead of chicken, it’s turkey. Taste-wise, it’s fantastic. The best part is that after you’re done with the turkey you get to eat the piece of bread that all the juice and sauce soaked in. Another winner from the Merry Mashups booth. First of all, take a look at the presentation on this thing. I really like that it looks like a campfire. Second, the taste is very very good. It really does taste like a cup of hot cocoa with marshmallows. This item is very sweet, which may turn some people off. Those people are crazy. Thank them for not wanting any of your precious macaron and eat it all on your own. The toffee pudding has been a staple of DCA’s Festival of Holidays since the event started a few years ago. Again, it does not disappoint. I actually had to reuse a picture of the dish from last year because I was so excited to eat it that I forgot to take a current picture. It’s that good. Check out the generous helping of salmon on top of of those bagel nachos. Good stuff. It’s worth mentioning that the Lox & Everything Bagel Nachos, along with many of the other items available at Festival of the Holidays, are made with fresh ingredients, which makes these dishes very good and it takes the sting out of the high prices. Also, this is another great item from the Merry Mashups booth. That booth was definitely a winner this year. I found this item to be light, smooth, and refreshing. None of the tastes overpower each other. Also, I’m embarrassed to say that every year at Festival of Holidays there is at least one item that is named something that I don’t know what it is. This year is “trifle.” I whipped out my handy dictionary to find that a trifle is “a thing of little value or importance.” Knowing that was something different, I quickly moved my eyes down to see that a trifle is also “a cold dessert of sponge cake and fruit covered with layers of custard, jelly, and cream.” I can easily say this is the best trifle I’ve ever had. It’s also the only trifle I’ve ever had. Chorizo is sinfully good. Thankfully, calories don’t count when you’re in a Disney theme park. Yes, these are pretty much fancy nachos. But hey, they’re delicious. Looks are deceiving with this dish. It appears to be a basic soup, but it’s actually a complex mix of garlic, chickpeas, tomatoes, and more. The grilled naan was warm and tasty. This is a dish that is easy to overlook but it deserves a try. I’m not a big fan of bacon or gravy but the cornbread cakes in this dish quickly won me over. The cornbread is on the savory side thanks to the collard greens. After eating this I made a note took look up a recipe because the taste of it was excellent. This year I only experienced one item that I wouldn’t recommend, and while it’s mostly because of the high price and small serving size, I wasn’t a big fan of the taste. The glaze that they used was a bit too sweet and syrupy, which is a bummer because I’m usually a big fan of pineapples.

There’s other food items available at Festival of Holidays that didn’t make the cut for this post. But hopefully this will help you find some treats to enjoy. Be sure to check out our Disneyland Crowd Calendar to see the best dates to visit the parks this holiday season. Let me know about your favorite Festival of Holidays items in the comments below.