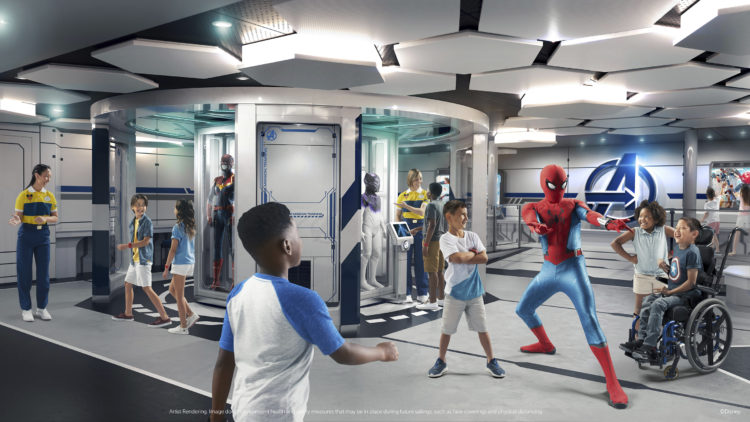 Let’s get into the kids areas on the ship. Disney is known for having amazing kids areas that really take the Disney stories and bring them to the next level. This is definitely true for the Disney Wish! There will be immersive worlds themed to Marvel, Star Wars, Disney films, and Pixar stories. These areas will feature imaginative programs with the care and expertise of Disney-trained counselors.

Children ages 3 to 12 will enter the worlds of some of their favorite Disney stories in the reimagined Disney’s Oceaneer Club. Here kiddos will be able to experience, storytelling, arts and crafts, dress-up to toys, games and even watching Disney movies. Onboard the Disney Wish, the Oceaneer Club will be found on Deck 2, but the fun to enter starts on Deck 3, courtesy of a “secret” entrance that takes the form of a twisting slide. (I mean, I know I’m an adult, but I really want to go down that slide too!) When kiddos enter the hub, they will find it decorated with black-and-white sketches of Disney and Pixar characters. The hub will feature a stage and its own slate of special shows, activities and character appearances.

So what will the kids get to experience? Well, first things first will be Marvel Super Hero Academy. This will be a high-tech Avengers headquarters where young “recruits” will train to be the next generation of Super Heroes with the help of their own real-life heroes, like Spider-Man, Black Panther, Ant-Man and the Wasp. Kids will begin by choosing a super hero suit from a selection of power sets based on Marvel heroes like Iron Man and Captain Marvel, and watching their choices become nanotech forms around mannequins in real-time. Then it will be time for “Avengers: Mission Training,” which will be a gesture-based technology game where they put their new suits and skills to the test as they virtually battle bad guys.

The next area where they can hang out will be Fairytale Hall. This will be a trio of activity rooms where kids will join some of their favorite Disney Princesses courtesy of Rapunzel’s Art Studio, Belle’s Library, and Anna and Elsa’s Sommerhus. In Rapunzel’s Art Studio, kids will be able to make their own arts and crafts projects, like floating lanterns and paintings. Over in Belle’s Library, they will find a cozy corner for reading and acting out stories with the help of favorite Disney characters. An enchanted painting above the fireplace will even magically transform to bring the tales to life. Finally, in Anna and Elsa summer cabin, kids will unlock icy powers during “Frozen Fun,” a series of gesture-based games hosted by Olaf. These games will include snowball fights with friendly trolls and a hunt for mischievous Snowgies. ”

This next place is one that really has me wishing I was a kid again. In the Walt Disney Imagineering Lab, it will be a first-of-its-kind opportunity for kids to discover the secrets of Disney Imagineers. Kids will be able to participate in hands-on activities and inventive experiments. Sorcerer Mickey, the ambassador of Walt Disney Imagineering, may even stop by to lend a wand to the newly minted magic makers. And one of the coolest things that the kids will be able to do is design roller coasters in the Ride Studio. Here kids will create a coaster along the lines of Big Thunder Mountain Railroad, Space Mountain or Matterhorn Bobsleds and then, they will be able to climb into a capsule where they will virtually ride their attractions. Ok…seriously…this sounds amazing.

More new spaces and experiences at Disney’s Oceaneer Club will be revealed at a later date.

In the nursery, toddlers will take a playful trip around the world in the company of Disney, Pixar and Marvel characters reimagined as “it’s a small world” dolls. Each section of the space is themed to different areas of the world, with characters grouped by their homelands.

In the play room, magical murals will feature interactive hand cranks that trigger delightful effects. Little ones will be able to spark ice magic from Elsa’s hand, send Aladdin and Jasmine swaying on the magic carpet, uncover Flynn Rider as he clings to Rapunzel’s enchanted tresses, and more. A toy train will chug along the ceiling, filling the space with colorful lights, playful sounds and kinetic energy.

Older kids ages 11 to 17 will play in their own way aboard the Disney Wish, with trendy hangouts and counselor-led programming designed to engage the unique interests of tweens and teens. Featuring all-new looks that combine sophisticated design with youthful Disney touches, these clubs will offer customized fun and secret entry ways.

At Edge, tweens ages 11 to 14 will have fun in a bright, colorful hangout inspired by a chic New York City loft. A faux-grass picnic area and graphic art displays called “photo walls” will provide opportunities for tweens to capture shareable vacations pics. Edge will be found on deck 5, and the exclusive entrance will be hidden behind a framed piece of art that reimagines world-famous paintings in a pop art-inspired compilation of Disney characters, including Minnie as the ‘Girl with the Pearl Earring’ and Donald as Salvador Dali.

Moving over to Vibe, which is the hangout for teens ages 14 to 17 will be an area inspired by a Parisian artists’ loft. This stylish space features classic architectural elements with an electric retro twist, with vibrant neon signs and funky pop art. Combine those with floor-to-ceiling windows overlooking the ocean, and every angle in Vibe will offer a selfie-worthy backdrop.

Want to learn more about the upper decks and what the AquaMouse is? Plus, are you curious when you can sail on the Disney Wish? Take a look at this article for all the details.