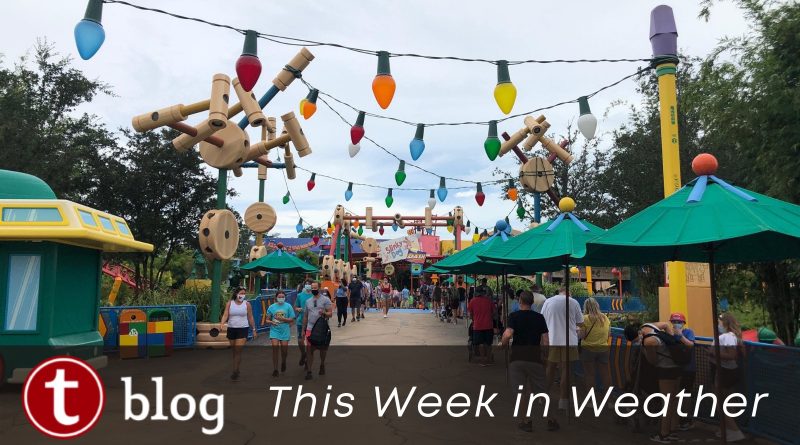 Welcome to the wild and wooly world of peak hurricane season! The weather in Central Florida is definitely under the influence of tropical systems as we start the week. And with dueling storms in our neighborhood, the week will begin just how you might expect: with breezy days and some gusty squalls.

Last week was particularly wet and even kind of gray around Walt Disney World and the Orlando attractions. The weekend was supposed to be our break in the weather, but then: Tropical Storm Marco happened.

Radar estimates more than two inches of rain fell around the Disney, Universal, and Sea World parks on Saturday. The falling pressure, tropical moisture, and steady southeast flow around the tropical storm were enough to cause steady downpours throughout the peninsula.

What’s coming this week? After the influence of two tropical systems move out of the way, rain chances should drop off for a few days. Then? That old southwest flow returns, and with it, persistent heat and the potential for plenty of afternoon storms.

For the rest of Sunday, think sticky and wet. But, at least there will be a breeze? As Tropical Storm Marco moves up the Gulf of Mexico and Laura approaches Cuba, even more tropical moisture will feed into the Florida peninsula. Rain will develop in the afternoon and into late evening. There’s an isolated chance of a strong thunderstorm. Motion will be out of the southeast at about 20-25 miles per hour. The chance of rain is about 50%. Watch out for a heat index as high as 105 degrees with all of the humidity out there.

Monday, Tropical Storm Laura should be moving near or over Cuba’s western shores, heading into the Gulf of Mexico. With this motion and high pressure to our north, winds will really pick up here. On Monday we can expect winds of 15 to 20 miles per hour, and gusty, fast-moving squalls moving inland from the Atlantic. These will be scattered and highly-localized, so there’s a 60% chance of rain, but some areas might see a few inches of rain and some might just get a trace. Monday’s high is near 92 degrees, with a heat index topping around 105 degrees.

On Tuesday, watch out for a scorcher. Laura should be intensifying into a hurricane but moving west northwest across the Gulf of Mexico. As the storm pulls away, we’ll be left with a drier, easterly flow. There will be just a 30% chance of rain Tuesday afternoon. With dry air and plenty of sun, it gets hot: 94 degrees. There will be a southeast breeze of 10 to 15 miles per hour.

Wednesday also has lower rain chances. It should be mostly sunny and hot, with a high around 93, a southeast breeze, and a 40% chance of afternoon storms.

Thursday the axis of a ridge drops over the peninsula, giving us a southerly flow which brings back the rain. The day starts hot and humid, with a high of 93; then watch for a 60% chance of showers and storms. This weather pattern sticks around for Friday.

By Saturday, the southwest flow returns as the ridge axis drops to south Florida, and we’ll be looking at continued high coverage of afternoon storms moving inland from the west coast, after midday highs around 90-93 degrees, and overnight lows in the upper 70s.

Tropical Storms Marco and Laura are both expected to move through the Gulf of Mexico towards the Louisiana coastline over the early part of the week. Marco is expected to make landfall as a hurricane sometime Monday; Laura sometime Thursday.

Of these two, Tropical Storm Laura still has Florida forecasters’ close attention. However, there is fairly strong confidence in Laura’s continued track towards the west-northwest, and eventually away from Florida. The main influence on our weather will be the strong breeze and squally, fast-moving storms through Monday.

Behind them, there are no new storms to consider. As of Sunday morning, no new tropical cyclone formation is expected for the next five days.