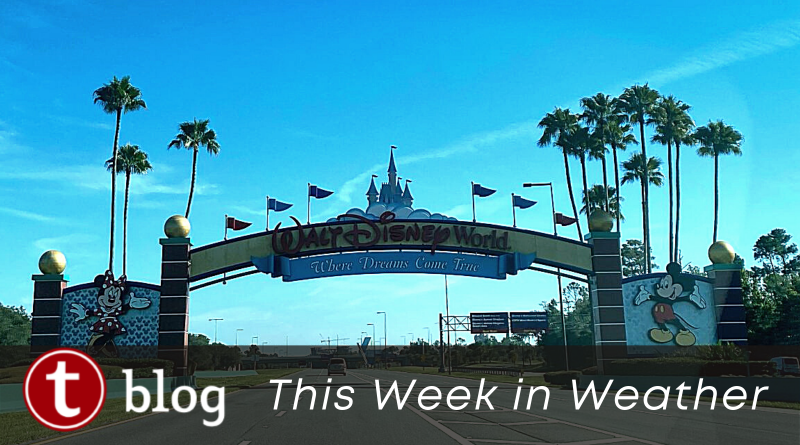 In August, years of observation have taught me, Orlando has a slightly stronger and wetter storm pattern than what we typically see earlier in the summer. Last week we definitely saw it: hot days with searing humidity, passing showers in the afternoon, and storms that didn’t really get rocking until well after five o’clock on some days. Lightning stuck around well after sunset, the power flickered for many people around Walt Disney World, and we even saw some wind damage.

Ask me about August in Orlando and I will describe to you a sultry evening in Frontierland, looking west, seeing the high icy tops of a distant storm behind Splash Mountain filled with a lacy web of pink lightning. It’s a beautiful image and to me it sums up the big, drifting storms of August evenings, their boundary collisions which cause new storms to explode in a matter of minutes, the spreading cloud tops of cumulonimbus stretching over the sunset.

The mornings and middays, though? They’re just hot. That heat index of 105 at 1 p.m. will have you feeling every step you take in the sunlight.

This week, expect a weather setup that favors more afternoon storms and more midday heat to continue the August pattern. With high levels of moisture in the atmosphere, sea breezes will not have any trouble kicking up storms each day.

For the interior peninsula, including Orlando and the surrounding area, afternoon storms will blow in each day and their boundaries will kick off new storms which wander around until just after sunset. For the Space Coast, rain chances go down later in the week as the Atlantic ridge adjusts position, increasing the onshore flow on the east coast and pushing rain towards the west.

Sunday afternoon will continue be a hot one with a high of 96, before storms pop up in late afternoon and evening. Storms will concentrate north of I-4, so that includes all the theme park areas. With erratic movement and boundary collisions sparking new convection, rainfall could top two or three inches, and there’s a chance of small hail as well.

On Monday, look for a high of 94 degrees with a 50% chance of storms beginning around midday and lasting into the evening. A light breeze should pick up from the east southeast in the afternoon. The evening will cool slowly to around 76.

Tuesday, there is a 50% chance of afternoon storms with a high of 94 degrees and a low of 75. The east coast sea breeze should be stronger today and could fuel more early storms along the coast before they cluster and build over the interior.

Wednesday has a higher chance of numerous showers and storms throughout the day. The high will be 92, with a rain chance of 60%. Low will be around 75 for the evening. Around this time the Atlantic ridge will have shifted north, and the stronger onshore flow from this could push most of the evening storms towards the west coast. However, the atmosphere is so moist, rain could just stick around anyway.

On Thursday, the hot and sunny start will give way to another 60% of afternoon storms. The high will be 93, low around 75. Southeast winds pick up here — there might be a nice breeze! Steering flows remain light for the rest of the week, so there continues to be a chance of lingering storms into the late evening.

Friday, another elevated rain day with sunny skies before a 60% chance of showers and thunderstorms, with a high near 94 and a low of 75.

On Saturday, once again, likely showers and storms with a high of 93, and a 60% chance of rain.

Although August is typically a time of hot hurricane season development, this weekend all’s quiet on the Atlantic front. There’s a single tropical wave located off the coast of Africa which has a low chance of development — 20% over the next five days. Other than that, as of today, nothing is stirring in the warm waters of the Atlantic, Caribbean, or Gulf of Mexico.

Worried you were missing out on some great theme park weather this summer? Let’s go to the averages. The National Weather Service in Melbourne reported that July 2020 was both warmer and wetter than normal in East Central Florida. That’s the region that stretches from the WDW area in the west to the Space Coast in the east, and also includes Daytona Beach, Sanford, and The Villages.

July’s weather was first dominated by a southwesterly flow, which created widespread afternoon showers and storms from Orlando to the coast. In the second half of the month, the northward movement of the Atlantic ridge caused the onshore flow to switch to an easterly. This caused storms to develop over the interior and push west towards the Gulf—drying out east coast beaches, but still soaking the interior of the peninsula.

Temperatures were normal to near normal, with highs in the upper 80s to mid 90s, and lows in the high 70s with a few nights in the 80s. A few spikes in temperature and record highs were recorded, often due to a suppressed east coast sea breeze caused by that strong western flow.